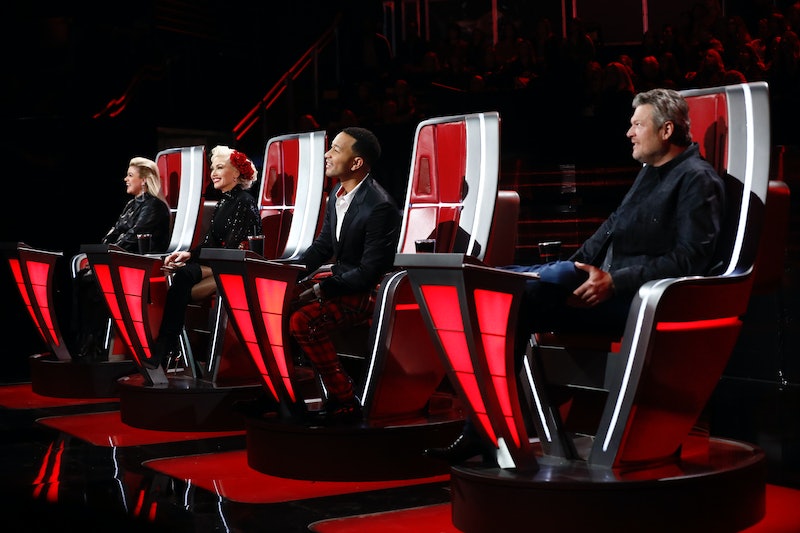 Get ready for a dramatic chair turn: The Voice Season 18 premiere isn’t far off now that Season 17 will reach its conclusion. While NBC hasn’t announced a specific date for the next season of the music competition series just yet, The Voice will return in spring 2020, sometime between late February and early March. And while the competition will remain the same, there will be a new coach joining the season.

As for a possible date, The Voice’s Wiki page suggests that the new cycle will resume on Feb. 24, 2020, but nothing has been officially announced. What is official is the news that Nick Jonas will join the Emmy-winning show as a coach alongside returning coaches Kelly Clarkson, John Legend, and Blake Shelton. Jonas will replace Season 17 coach Gwen Stefani. As Entertainment Tonight noted, Stefani will return to her Just a Girl concert residency in Las Vegas in early February and Jonas will conclude his Jonas Brothers world tour in mid-February. These dates suggest that the Season 18 cycle will, in fact, resume sometime in late February, as the show’s Wiki page suggests.

Jonas announced his new Voice coach status in October while on the Ellen DeGeneres Show. In a Twitter video shared shortly after, the singer said, “I am so excited. To be joining that crew of amazing coaches, Kelly Clarkson, John Legend, Blake Shelton. While I'm excited to work with you guys, I'm coming for you."

After Jonas shared the news on Ellen, DeGeneres shared a clip from Jonas’ new co-workers as they congratulated him on the gig. "I'm going to have to look through the rules, because this is my TV show," Shelton said in the video. "I'm not even sure if you're old enough to be a coach on The Voice, but I'm certain that you're going to get your butt kicked, buddy." Clarkson, on the other hand, proposed an alliance. “I do definitely feel like the two Texans should maybe team up and form an alliance,” she said in the clip. “I’m just saying.” Legend echoed the same sentiments, adding, “Our mission is to destroy Blake Shelton. We have to form an alliance. Me, you, Kelly."

While fans will be sad to see Stefani go, Jonas is certainly a worthy replacement. On top of a successful solo career, this year, Jonas Brothers reunited in February after nearly six years apart. The band’s first single, “Sucker,” debuted at No. 1 on the Billboard Hot 100 in March, and was recently nominated for a Grammy. So look out for some heated competition when The Voice Season 18 returns to NBC in the spring of 2020.