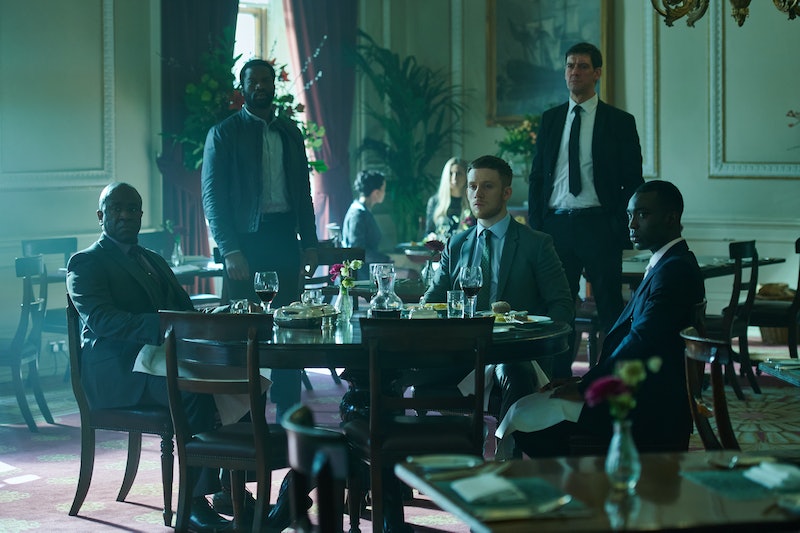 Spoilers ahead for Gangs of London series one. Ever since its release on April 23, critics and viewers have been raving about Sky Atlantic's Gangs of London. The new crime drama follows Sean Wallace (played by Joe Cole), a smartly dressed gangster seeking revenge after his father is murdered by an unknown enemy. Full to the brim with blood and bullets, this new series is not for the fainted hearted, but if you've managed to stomach all nine episodes, you may be itching to know: when is Gangs of London back for season two?

Joining Cole (who made his name as John Shelby in Peaky Blinders) in this violent thriller is Michelle Fairley, who many will recognise from Game of Thrones, and a number of other big stars, including Lucian Msamati, Sope Dirisu, and Ray Panthaki.

It's only been out a few days since the show premiered and already Twitter is alight with people asking when Gangs of London is coming back. Sadly, however, no official announcement has been made yet. Bustle has reached out to Sky to see if there is any info we can share at this point, but it's early days, so we may have to sit tight for a while. Especially considering filming for almost every British series is on pause at the moment due to the COVID-19 crisis.

The show was created by award-winning filmmaker Gareth Evans and his creative partner Matt Flannery. Speaking to Sky News about the potential of a second series, Evans said: "I am not sure to the level of that yet. Have to wait and see for that. But there's certainly scope and availability there for the story threads to be picked up again and for those journeys to continue."

Talk about an understatement. The end of season one left us with so many questions: is Sean really dead? Has Elliot joined forces with The Investors? Is Luan ever coming back? And don't *even* get us started on that Floriana/Marian twist at the end.

With all this and more left unanswered, season two can't come soon enough.