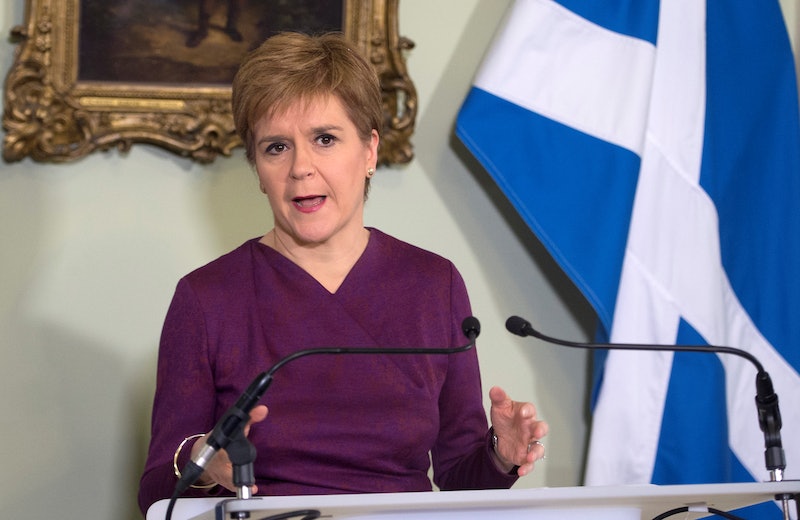 Over the last four years the UK has seen three general elections and an EU referendum. To say that politics has been very eventful would be a massive understatement. Brexit has been one of the most divisive political issues of our time. We may have a new cabinet, but it’s not about to go away anytime soon. Another important referendum could be on the horizon that has the potential shake the UK to its very core. In the words of Brenda from Bristol, “you’re kidding. Not another one.” Will there be a second Scottish referendum in 2020? Both the issue of Brexit and the general election on Dec. 12 have called into question whether Scotland should have another say as to whether they should become independent from the UK.

In September 2014, Scots went to the polls to vote on whether they should have independence from the rest of the UK. "No" won with 55% of the vote. However, in 2016 Scotland voted differently to the rest of the UK in the EU referendum. While Leave won with 52% across the UK as a whole, Scotland voted to remain by 62%. Since then Scotland’s first minister, Nicola Sturgeon, has argued that Scotland should remain in the EU as an independent nation.

The election on Dec. 12 only furthered Sturgeon and the SNP’s desire to take Scottish independence back to the polls. The SNP won 47 of Scotland’s 59 Westminster seats in the most recent election, adding to their majority. Sturgeon told the Guardian, “I don’t pretend that every single person who voted SNP yesterday will necessarily support independence, but there has been a strong endorsement in this election of Scotland having a choice over our future; of not having to put up with a Conservative government we didn’t vote for and not having to accept life as a nation outside the EU.”

Scotland already has devolved powers meaning the Scottish parliament controls education and tuition fees, health care policy, and environmental policy among other things. However, as it stands, when the UK leaves the EU, Scotland will have to come, too.

The Guardian reports that, prior to the election, Sturgeon had promised to ask the UK government and Boris Johnson for the powers to stage a second referendum before Christmas, and on Thursday, she did just that, saying that the Dec. 12 election result gave the party an "unarguable mandate" to hold a second vote, as the BBC reports.

A report released by the Institute for Government concluded that in light of the election result it’s almost impossible to deny a Scottish independence vote and “the government must develop a new strategy to strengthen the Union. This should be designed to improve Whitehall’s approach to devolved issues, and set out a new approach to joint working between the UK and devolved governments.”

However, support for independence within Scotland isn't assured. Data collected by the nonpartisan group What Scotland Thinks said in 2018 51% of Scots would vote no in an independence referendum compared to 49% who would vote yes.

And Boris Johnson may not be the only thing that stands in the SNP’s way of holding a second independence referendum in 2020. While Brexit seems a little bit like the wild west, there are rules that have to be followed in order to hold a referendum. The Electoral Commission needs 12 weeks to assess the wording of the question being put forward in the referendum. There then needs to be a further eight weeks to carry out research and six to establish lead campaigners. This is known as the lead-in period. Then 10 weeks must be allowed for campaigning in the run-up to the vote. This is about nine months in total. So, if the SNP want to hold the vote in 2020, they’d have to get the cogs in motion pretty sharpish after the new year.

Whether Sturgeon chooses to kick off the new year with a bang and petition for an independence referendum in 2020 or wait until the Scottish government elections in 2021 to make her case, what is clear is that she's very keen on remaining in the EU and taking Scotland out of the UK. “I hope in the coming days and weeks we will see a similar coming together around the idea of Scotland’s right to choose a better future,” she said, per the Express.