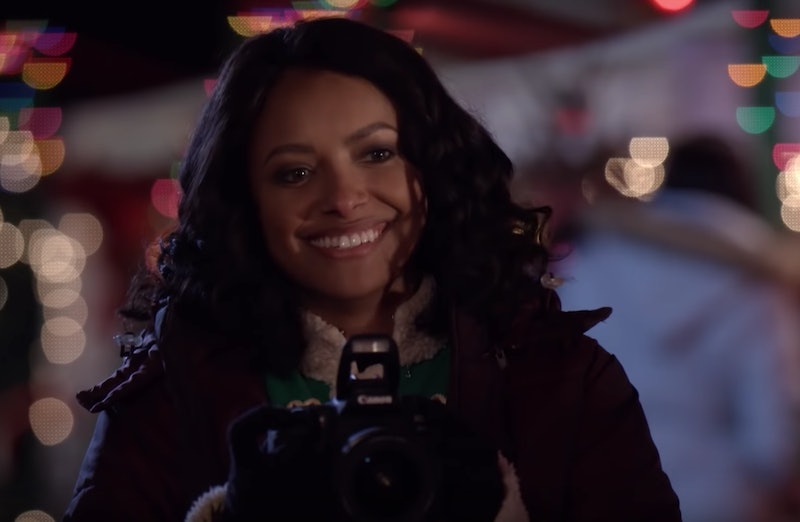 After Netflix released the shockingly popular Christmas movie, A Christmas Prince in 2017, it makes sense that the platform would want to keep up that momentum and provide more original Christmas content this year. But since talking about potential capitalist motives really ruins the Christmas magic, let's just say that Netflix has a new seasonal family movie, The Holiday Calendar, coming out on Nov. 2. The festive romantic comedy stars Kat Graham, and, if it's anything like The Christmas Prince, it'll probably leave you desperately hoping that The Holiday Calendar will get a sequel. Sadly, it's a little too early to tell whether it will or not.

For now, you can find comfort in knowing that there's more of the story to be told, which could lead to a sequel. The Holiday Calendar tells the story of Abby (Graham), a photographer who's unsure of the direction of her life. Abby's family of lawyers tells her that photography is more of a hobby than a career, and she has to pick up odd jobs — like taking pictures of kids with Santa Clause — to pay her bills. When Abby's grandpa (Ron Cephas Jones) gives her an antique advent calendar, everything in her life changes.

Spoiler ahead for The Holiday Calendar. After the magical advent calendar seemingly guides Abby to date the most eligible bachelor in town, doctor Ty Walker (Ethan Peck), Abby realizes that her true love is actually her best friend, Josh (Quincy Brown). The magical calendar's clues had been a little ambiguous — they were mostly little figurines of cliche Christmas decorations or activities — and Abby ended up re-tracing the clues to Josh.

While The Holiday Calendar does provide its own mini-epilogue, showing one year after Josh and Abby got together on Christmas, a sequel is totally in order. Just like with A Christmas Prince, a movie ending with the two lovestruck characters finally getting together doesn't mean that the story is over — not nearly. No, Abby and Josh won't have a royal wedding like Amber and Prince Richard host in A Christmas Prince's sequel, but there's so much more of the story of the mystical holiday calendar to tell.

Maybe the calendar could provide clues later in Abby's life that leads her to a different career or on an exciting solo adventure around the world. Or maybe a sequel to The Holiday Calendar could tell the story of a different person receiving the calendar and finding love because of it. After all, as A Christmas Prince showed us, Christmas movies are better with romance — and the more unexpected that romance, the better.

The possibilities for Holiday Calendar sequel are rich, and, not to get all capitalist on you again, but Netflix seems to be eyeing the holiday market this year with the release of three new movies in addition to The Holiday Calendar. There's A Christmas Prince: The Royal Wedding (out Nov. 30), The Princess Switch (Nov. 16), and The Christmas Chronicles (Nov. 22). If Netflix keeps this up it seems that 2019 could very well provide a new chapter to the story told in The Holiday Calendar.