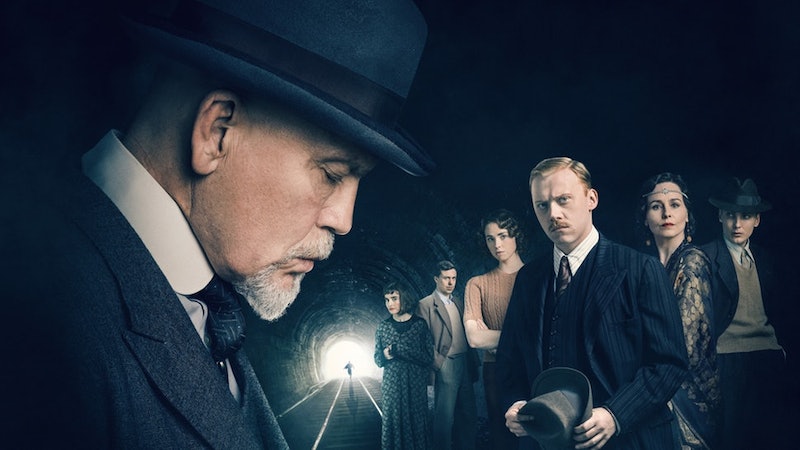 Period dramas of the murder mystery variety and Christmas go together like bread and bread. So, ahead of all of this year's festivities, I know you'll be asking yourselves, will there be an Agatha Christie adaptation on BBC this Christmas? There's a bit of confusion around transmission dates for a couple of upcoming Christie-inspired dramas, so let's dig in.

Right, so, here's the thing. Despite last year's ABC Murders being such a hit, it seems a bit quiet on the Christie front this year. There has been talk of an adaptation of Death Comes As The End, one of Christie's most unorthodox stories, but we've yet to have any concrete news on when exactly it will air. Last December, the BBC revealed to the Radio Times that the adaptation would be coming this month courtesy of writer Gwyneth Hughes. However, in October 2019, the BBC were "unable to say whether Death Comes As The End will air at Christmas 2019," but they were able to say, "transmission for this is to be confirmed." Whatever that means.

If this news comes as a bit of a blow, why not fill up on old favourites?All you have to do is get on Britbox or the ITV Hub and enjoy the available productions including lashings of Poirot and Miss Marple.

While we're not 100% sure about what's going on this month, 2020 is set to be a good year for Agatha Christie cheer as the BBC are bringing out an adaptation of The Pale Horse in the new year.

And even better news that the BBC reports it's being written by the utterly brilliant Sarah Phelps who has proven to be worth her weight in gold when it comes to writing excellent scripts. She adapted the deliciously dark And Then There Were None and Ordeal By Innocence, which obviously means she's a dab hand at bringing Christie's greatness to the screen.

The BBC announced the cast involved and it's looking like it's going to be a very handsome and talented bunch. Including Skins' Kaya Scodalario and Rufus Sewell from Victoria, A Knight's Tale, The Father, and much, much more. No official date has been announced but it looks like this is going to be a little slice of magic. Keep your eyes peeled.

More like this
Olivia Colman Stars In First-Look Trailer For BBC's 'Great Expectations'
By Sabah Hussain and Sam Ramsden
Everything To Know About The 'Daisy Jones & The Six' TV Series
By Maxine Harrison and Brad Witter
Rupert Grint Just Shared A *Major* Update About Ron Weasley’s Future
By El Hunt
Every Season Of 'Love Island' Ranked Best To Worst
By Alice Broster, Frances Stewart and Sophie McEvoy
Get The Very Best Of Bustle/UK
Sign up for Bustle UK's twice-weekly newsletter, featuring the latest must-watch TV, moving personal stories, and expert advice on the hottest viral buys.