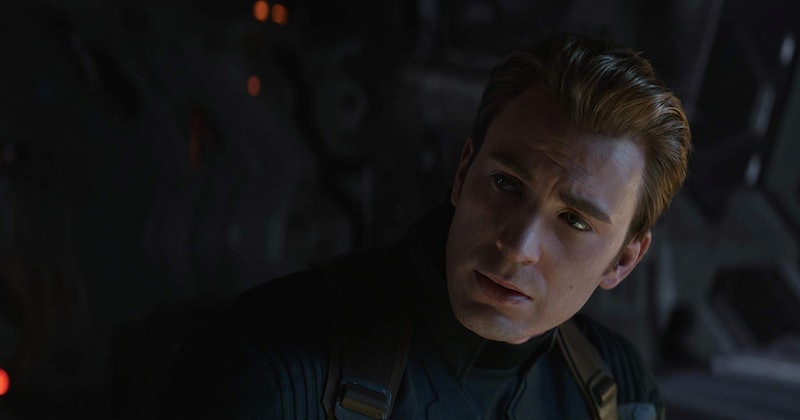 The impending arrival of Endgame brings up tons of questions about the future of the Avengers and the MCU in general. In Infinity War, many of our heroes turn to dust after Thanos's snap, and Endgame will surely reveal whether or not they're really gone for good. One of the lucky ones who remains unscathed (at least physically) is Captain America. Steve Rogers is part of the remaining team working to bring back half of the universe, but will Captain American get another standalone flick?

Sadly, this is most likely the last time we’ll get to see Chris Evans play Steve Rogers. Marvel is moving on from his arc because Evans’s contract is fulfilled with Endgame, and the actor is expanding his horizons into new projects, including starring in the limited series Defending Jacob, and acting in four upcoming films, per IMDb. Evans confirmed to The New York Times in March of 2018 that he is done playing the beloved hero, saying “You want to get off the train before they push you off.” So don't hold your breath for a fourth Cap movie.

The actor also thanked the crew and fans for the support in an emotional tweet last fall, where he opened up about how much the role means to him.

In an interview with E!, the actor delved further into how it feels to close the chapter on the character. “It’s almost terrifying to think about these being done,” he said. “It always feels so good to kind of wrap and just say, ‘All right, one more down.’ But it's also kind of like high school in a sense. You keep looking to when you're going to be done, and we're almost done now, and you're not quite ready for it to be over.”

Leaving behind the character and people who he has worked alongside for so long is tough. The actor mentioned that there are so many things he’ll miss about portraying Captain America, who debuted in Captain America: The First Avenger back in 2011. “[I’ll miss] everything [about Captain America],” he shared. “I mean, it’s not just the character, it’s the people – the experience, such good movies, such wonderful memories. I’ll miss a lot.”

While we know that this will be his last, Evans noted that his tweet should in no way be considered a spoiler. NME reported that during an appearance at ACE Comic Con in Chicago, the actor discussed the meaning behind the tweet.

“I should clarify that I know I did tweet something that made a lot of people think that it was in some way a spoiler,” said the actor. “I should clarify that regardless of how Avengers 4 ends, I would have tweeted the exact same thing. That last day of filming was a very emotional day and it was the culmination of almost 10 years of filming and 22 movies, this unbelievable tapestry. You feel a lot more emotions than I think even I thought I’d feel. And I felt it was appropriate to share the gratitude. I know it had a ripple effect but I am neither confirming nor denying anything.”

Still, it seems that Steve Rogers, at least, is done, though there is a definite possibility that another character could take over the Captain America name. (Many people have been Cap in the comics.) So if there is another Cap movie in the MCU's crystal ball, it's going to look a lot different than the ones you already know and love.