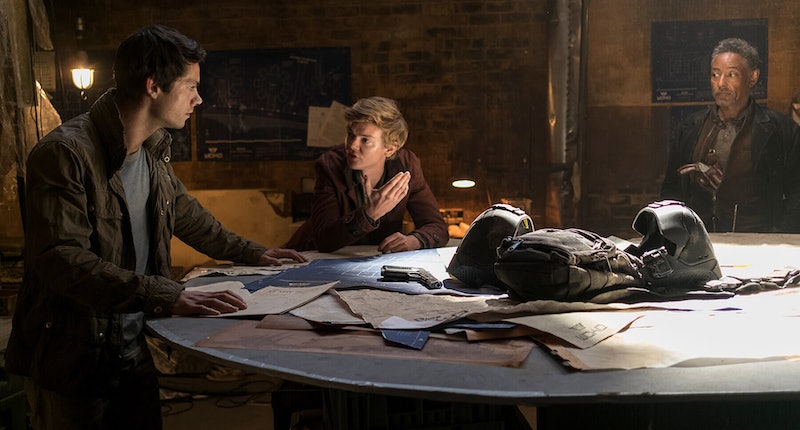 The Maze Runner series has released its third film, Maze Runner: The Death Cure, and the movie is already a hit. The film premiered on January 26 and topped the box office for its opening frame, finally unseating Jumanji: Welcome to the Jungle after that film spent three straight weekends in the number one slot. But even though The Death Cure is meant to serve as the final film in the Maze Runner series, the film's success out of the gate is leading some fans to speculate that the franchise could go on. So will there be another Maze Runner movie, or is this it for the Gladers?

Currently, there are no known plans to continue the franchise with a fourth movie. The trailers for The Death Cure have teased the film as "one last ride," while the movie's official website states: "In the epic finale to the Maze Runner saga, Thomas leads his group of escaped Gladers on their final and most dangerous mission yet." That type of language doesn't leave much wiggle room for the series to continue, and The Death Cure is indeed based on the final book of the same name in the original Maze Runner trilogy of novels. However, there was a time when a plan for a fourth film was almost expected.

For a short while in Hollywood, there was a trend to split the final installment of a film series based on YA novels into two parts. This fad was kicked off when the producers behind one of the most successful series ever, Harry Potter, opted to split the final book in the series, Harry Potter and the Deathly Hallows, into two separate films in 2010 and 2011. This was immediately followed by the conclusion to the Twilight Saga, Breaking Dawn, which saw part one released in 2011 and part two hit theaters in 2012. Then there was The Hunger Games, with final installment Mockingjay: Part One being released in 2014 and Mockingjay: Part Two premiering the following year.

By the time the Hunger Games was reaching its conclusion, a backlash against the trend was beginning to form, with fans complaining that a "part one" of a climactic film barely counts as a film at all, since it purposely ends without a real climax. The backlash has been observed in recent movies backing out of the trend, like superhero films Avengers: Infinity War and Justice League, which were both originally going to be two-part films when they were first announced in 2014, but ultimately reduced themselves to solo movies. The most glaring example of split-movie fatigue can be seen in the final novel of the Divergent series, Allegiant, which was to be split into two films: Allegiant in 2016 and Ascendent in 2017. But by 2016, audiences had already tired of the split-movie trend and Allegiant bombed at the box office, leading to the cancelation of Ascendent. The final film may now be a TV movie, likely with a different cast, leaving fans without a proper conclusion to the franchise.

When plans were first being formed for The Death Cure back in 2014, the split-movie trend had already reached its peak popularity, and Maze Runner director Wes Ball knew early on that he did not want to split up the last movie in his trilogy. "I think three is the number; beginning, middle, end, that's it. Four? I think there's something off about four. For me, if I have any say in it, there's three movies basically," Ball told Digital Spy at the time. "We're not going to [split a book in two], no way. I think three movies is the right number, Star Wars!" The series' screenwriter, T.S. Nowlin, also stands firm against continuing the Maze Runner franchise, recently telling Thrillist's Sean Fitz-Gerald, "We've actually talked about how much we don't want to do a fourth movie. It's rare to do something clean, that just has a beginning, a middle, and an end. I really like the way this movie wraps things up and ends. It's nice to let the movies kind of exhale."

So it looks like The Death Cure really is it for the Maze Runner franchise. Unless, of course, someone eventually decides to adapt the series' prequels into films.