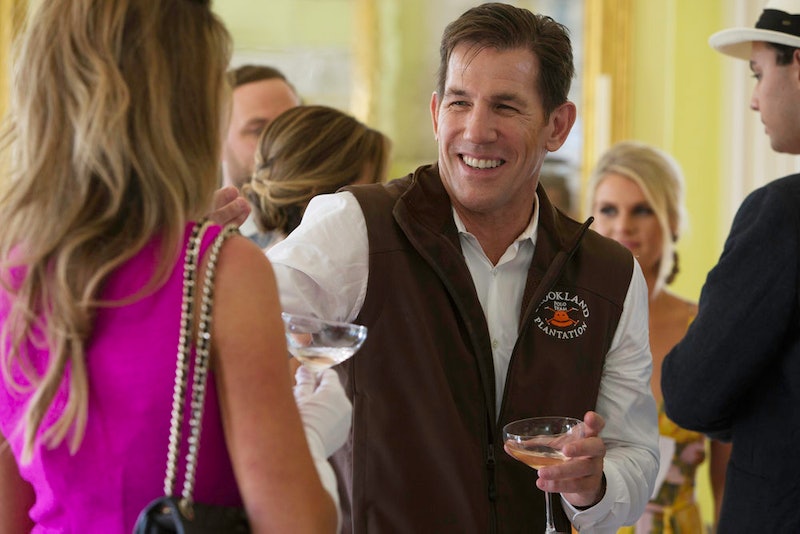 Ashley Jacobs and Thomas Ravenel have been the sole center of drama on Season 5 of Southern Charm, and with just one episode until the season finale, they’re not slowing down now. The penultimate episode showed months (or weeks or days, it’s hard to tell in reality television) of discord coming to a head, and Ashley and Thomas saying, “Hey, should we walk away from this right now?” Will Ashley and Thomas break up on Southern Charm?

To say these two have been on a roller coaster is an understatement, but it all boils down to this — Thomas wants Ashley to get a job and to stop pressuring him to propose. Ashley wants to do neither, it seems. Far be it from me to agree with Thomas Ravenel, a man who, when asked how he likes his eggs in the morning, says “unfertilized,” but yeah, having two partners both contributing to a relationship is a good idea. It is, as he says, a partnership, and if she had a job, Ashley could stand on her own two feet instead of spending Thomas’ money — that’s what Thomas’ argument boils down to. Honestly, I’m not sure what Ashley's central thesis is here. It probably has to do with Kathryn, Thomas’ ex-girlfriend and the mother of his children.

Ashley doesn’t like Kathryn, and that has been made abundantly clear all season. Heck, the season started in a flash-forward of both women screaming at each other. Three years ago, Kathryn would have loved a fight, but now, she’s clean, sober, and much more grounded (Patricia even likes her now!) — and she’s not taking Ashley’s bait, even when Ashley screams in Kathryn’s face that Kathryn once had her children taken away. Thomas had enough of this behavior from Ashley, and he told her that Kathryn, like it or not, would always be around because of their kids, so Ashley better cool her jets. Ashley didn’t love it, and they’ve had problems ever since.

But now, in today’s world, Ashley and Thomas seem to be going strong. A look at her Instagram shows a seemingly happy couple, going out on dates, cuddling, hanging out with their dog. In a 2018 interview with Bustle, Ashley admitted that she got a job — she’s a nurse — and that she and Thomas are on the right track now that she’s employed. “I think [Thomas and I] are doing better now that I am working," she said. "He respects me more. I’m independent. I’m paying my own rent. He’s... in a place where if he was to walk away… I would be OK. He knows I don’t need him."

Ashley also spoke of what people don’t see on television, what their relationship is like behind the scenes. “We’re funny. We have fun. We laugh a lot. We tease each other a lot. It’s really playful and that keeps it really fun. There’s never a dull moment,” she said. “Thomas and I, we’re very touchy. We love to hold hands. We love to sit on the same side of the restaurant next to each other … we’re always together.” She also said that they love to hang out and just watch movies at home, like Titanic. “[Thomas] loves things that are heartfelt,” Ashley said. “He looks for the deeper meanings in things.”

While what viewers are currently seeing on Southern Charm looks like the end of the line for Thomas and Ashley, a more recent update (and, of course, social media) shows that the couple is still going strong. Heck, they even surprised Shep. In a 2018 interview with Bustle, Shep said, “You’ll see this season that there are some fireworks [between Thomas and Ashley], and I would have thought for all the world that that would have been the end of their relationship, and I was wrong.” It just goes to show that if there’s one thing Thomas and Ashley are good at, it’s keeping everyone on Southern Charm on their toes.