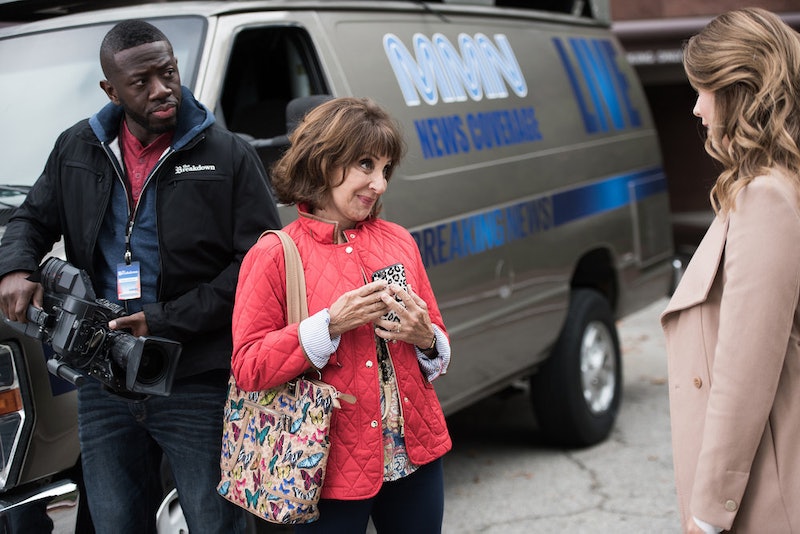 Tina Fey is my hero in many ways. She's a Chicago-comedy trained writer, former Saturday Night Live head writer, and creator and star of 30 Rock and Unbreakable Kimmy Schmidt. Fey even wrote the bestselling book Bossypants, which gave fans an inside peek into her upbringing and early career, and has put her fingerprints onto a handful of hilarious movies. Fey's impressive career has spanned most forms of media. And she shows no sign of slowing down or taking a smoothie break. Fey is an executive producer of the new NBC comedy series Great News, premiering April 25. So, will Tina Fey be on Great News as well as running things behind-the-scenes? Neither Fey nor NBC has been announced anything yet, but a guest appearance seems likely based on a running pattern.

Great News is about a fictional news station where a producer's mother is hired as the new intern. It explores the complicated nature of a mother-daughter relationship as well as the world of 24-hour cable news. All of this is right up Fey's creative alley. Her hit show 30 Rock also took place on the set of a television show, and talked about production in a very meta way. And some of Fey's comedy stems from differences between generations. While Fey is not taking on a main ensemble acting role on the show like she did on 30 Rock, based on her past projects, she may eventually show up onscreen.

Fey is an experienced producer and writer. I'm not sure Fey saw herself becoming just as famous as a performer. 30 Rock is very loosely based on her own stint on SNL, and her character in that series is very much a behind-the-scenes kind of woman. Still, Fey has proven that she is funny, quick and engaging on camera. She was the leading lady on 30 Rock, and has starred in movies like Baby Mama, First Date, and Sisters.

Recently, Fey made a multi-episode guest appearance on her hit Netflix show Unbreakable Kimmy Schmidt as Kimmy's alcoholic therapist. Fey initially stayed behind the camera on that project but happily added her talents to the cast when the situation called for it.

As you can tell from the promo above, Great News features a dynamic ensemble cast of actors, including Nicole Richie, Adam Campbell, and Andrea Martin It wouldn't be hard for Fey to slip into the mix for an episode or two. Perhaps some of this is wishful thinking, I love seeing how Fey writes herself into comedy shows. Her characters tend to be weird and dynamic, especially Liz Lemon.

If nothing else, I am certain that appearing on the show is an easy option for Fey. Audiences love watching her take on new characters, and she tends to elevate the comedy of whatever she's in. I hope that Great News has the intelligence of her comedies that have come before, whether or not she appears on screen.