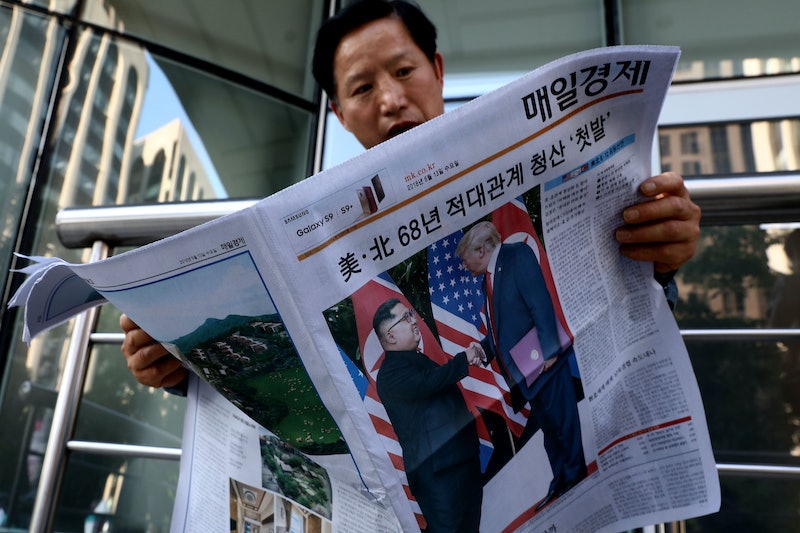 In 2018, President Donald Trump did something no other sitting U.S. president had ever done — he met with a North Korean leader. But will Trump and Kim Jong Un meet again in 2019? At least one of them has said they're open to another summit.

In a televised New Year's address, North Korean leader Kim said he was willing to meet face-to-face with Trump again in order to continue nuclear disarmament talks and come to an agreement that would be "welcomed by the international community." After month of exchanging insults, Kim and Trump first met in June during a bilateral summit held in Singapore to negotiate nuclear disarmament on the Korean peninsula.

But while Kim said he was ready to renew negotiations with Trump, the North Korean leader also issued a warning. According to NPR, Kim said the communist country "may be left with no choice but to consider a new way to safeguard our sovereignty and interests" if the United States continued to "insist on sanctions and pressures" and failed to keep the promises it made "in front of the whole world." Kim also warned Washington not to "misjudge the patience of [North Korean] people by unilaterally demanding certain things," the Associated Press has reported.

In his New Year's address Kim echoed the commitment for denuclearization that he'd made in June. "The statements and agreements after the summit with the United States were that we are going toward complete denuclearization of the Korean Peninsula, and that is my resolute commitment," The New York Times quoted Kim as having said. "We will not make nuclear weapons and we will not proliferate nuclear weapons, and I have said this, and I will say this again now."

However, Kim also said that North Korea was unwilling to take further actions toward said denuclearization until it saw reciprocal actions from the United States. "If the United States can show corresponding measures, the relationship between the two countries will, through many processes, accelerate for the better," The Times reported he said. "But if the counterpart continues with its past habits, it won't be good, but I hope they stop this." The North Korean leader also called on South Korea to stop conducting military drills with what he called "other foreign sources," according to The Times.

According to the Associated Press, North Korea has pushed back against Washington's demand for details and inspections of its nuclear and missile facilities. What's more, in September, North Korea said it would not unilaterally disarm until it felt it could trust the United States.

Trump himself has also expressed a willingness to meet with Kim, according to The Hill. In October, Trump told reporters that he aimed to meet the North Korean leader for a second summit sometime after the 2018 midterm election. However, no potential date or location for that second summit has been mentioned despite nearly two months having passed since the November midterms.