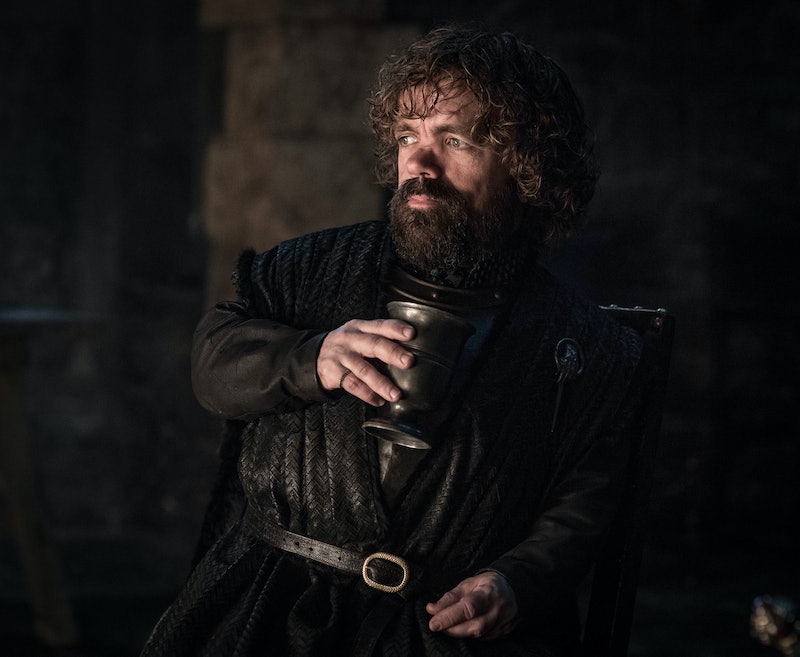 Sunday night's Game of Thrones episode, "A Knight Of The Seven Kingdoms," focused on Winterfell and what many of our favorite characters were doing/thinking on the eve of battle. It was the calm before the storm, but as much as we may like to think everyone will be safe inside the Stark family walls, many won't make it out of the Battle of Winterfell alive. Not even the Hand of the Queen is guaranteed survival. And while it's impossible to say whether or not Tyrion will die in Game of Thrones Season 8, the episode of April 21 makes his fate seem more uncertain than ever before.

All throughout the episode, numerous characters kept repeating how safe the Stark family crypt will be during the actual battle. Those who are unable to fight (or perhaps too valuable to risk losing) will take refuge down there until the battle is hopefully won. But if this show has taught us anything, it's that even the best laid plans almost never go as they should. So if we're supposed to believe that the crypts are safe, you better believe they'll be anything but. Plus, why else would the show waste so much of its already limited time telling us who will and who won't be in the crypts if it wasn't going to amount to something big later on?

And considering that the Night King has made a hobby of raising bodies from the dead, it stems to reason that he could decide to do just that with the very conveniently placed bodies currently residing under Winterfell.

Entertainment writer Alicia Lutes theorized on Twitter that the Night King will raise the dead Starks from their graves and kill all of the people hiding out in the crypts. And guess who Daenerys specifically instructed to go down to the crypts? Her Hand, Tyrion Lannister.

Granted, this alone shouldn't mean we just rule Tyrion out entirely. After all, he has managed to survive some very dire situations before. (Think of all the times Cersei tried, and failed, to kill him.) However, this is just one of the many ways the series seems to be foreshadowing Tyrion's demise. In this past episode, the character made a point of saying, once again, how he always thought he would die of old age while in bed with a woman. (He made a similar prophecy all the way back in Season 1.) But when has anyone on this show died the way they expected to? No one, that's who. So that in and of itself doesn't bode well for Dany's Hand.

Speaking of being Dany's Hand, in the GoT teaser about the aftermath of the Winterfell battle, Tyrion's Hand of the Queen pin can be found lying in the snow without its owner — another indication that Tyrion's days are numbered.

Plus, let's not forget that Cersei just instructed Bronn to kill both of her brothers and he didn't exactly say no to the task. That's not to say that Bronn won't have a change of heart once he comes face-to-face with either of his former buddies, but it's still definitely something to keep in mind.

Death is surrounding Tyrion on all fronts these days and with the dead now knocking at their door, his luck may have finally run out.

More like this
This 'Black Panther' Character Is Starring In Her Own Marvel Show Next Year
By Grace Wehniainen
'Wakanda Forever' Is Already Opening Doors For Mabel Cadena
By Grace Wehniainen
How To Stream 'Black Panther: Wakanda Forever'
By Chloe Foussianes
A 'Grey's Anatomy' Alum Will Join Negan & Maggie's 'Walking Dead' Spinoff
By Alyssa Lapid
Get Even More From Bustle — Sign Up For The Newsletter