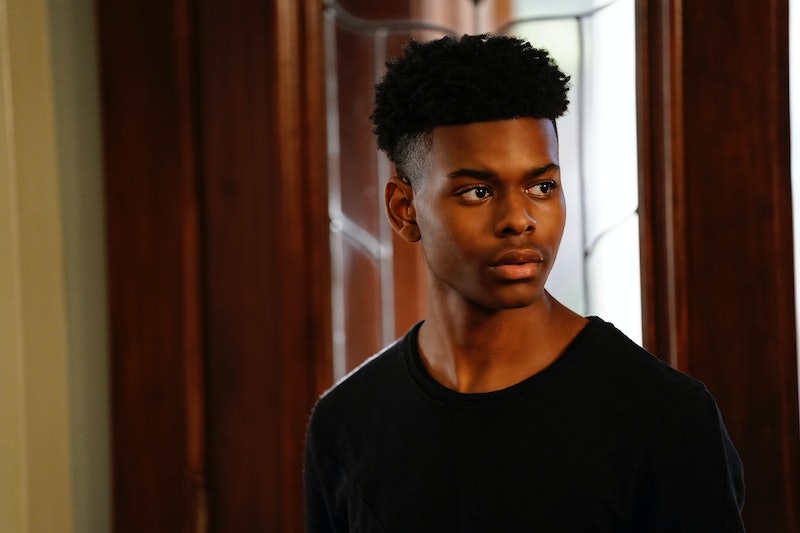 Major spoilers ahead for the “Ghost Stories” episode of Cloak & Dagger. Tyrone (Aubrey Joseph) finally donned his infamous cloak and confronted Connors (J.D. Evermore) in the July 19 episode of the series. The eighth anniversary of the childhood tragedies that changed Tyrone and Tandy’s (Olivia Holt) lives leads to some bold moves by the pair. Tandy confronts Roxxon boss Peter Scarborough (Wayne Pére) with some new evidence about the oil rigging accident, while Tyrone takes matters into his own hands by concocting a (wonderfully) scary plan with Detective O’Reilly (Emma Lahana) and her boyfriend Officer Fuchs (Lane Miller) to force Detective Connors into confessing to Billy’s (Marqus Clae) murder. In the end, Detective Connors ends up in handcuffs but Tyrone’s win comes with a deadly loss when Fuchs is found dead in his refrigerator. So, who killed Officer Fuchs? It looks like Connors was eager to exact revenge.

In this episode, O’Reilly chats with Fuchs about her desire to take down Connors. She harbors some guilt over shooting Duane (Dalon J. Holland) and believes Connors was trying to have her killed for looking into a drug operation. Fuchs says he will help with her investigation, but neither of them are sure about their next move.

Meanwhile, Connors is obsessed with finding Tyrone after he witnessed Duane’s murder. He has a sketch artist draw an accurate picture of Tyrone and says Tyrone needs to be “dealt with” ASAP. This causes O’Reilly to find Tyrone and warn him about Connors. But, Tyrone isn’t in the mood for a conversation on the anniversary of Billy’s death. Tandy stops by to check on him and invites him to do a memorial celebration with her in honor of his brother and her father Nathan (Andy Dylan). Of course, Tandy has an ulterior motive, which is seen when she swipes his mother’s Roxxon work badge. Almost everyone seems to work for this evil corporation.

Tyrone steps outside to meet O’Reilly while his father (Miles Mussenden) grieves over Billy’s old cloak. She tells Tyrone to lay low because Connors is on his tracks. O'Reilly also says Connors is on edge, possibly because he remembers the anniversary of Billy's death. Tyrone is frustrated with the lack of progress in O’Reilly’s investigation, so he crafts a plan to haunt Connors into a confession. He finds a shirt and puts holes with blood stains across the chest to recreate how his brother looked on the night he died.

Tyrone meets with O’Reilly and Fuchs to tell them that he will make Connors believe the boy he is looking for his not him, but Billy’s ghost. O’Reilly is hesitant and fears for his safety, but Tyrone says a man like Connors can be defeated because of his fear. “I want to use his fear,” said Tyrone. “His whole life is built on lies. A man like that is always looking over his shoulder. This time when he looks it will be Billy.” Tyrone reveals his powers to O’Reilly and Fuchs to convince them that his plan will work. It seems like a risky move, but Tyrone knows O’Reilly has seen many people with special powers as a former New York officer.

Later that night, Connors is unlocking his car door when Tyrone appears with his cloak. He takes Connors gun out of his holster and whispers “you killed me” in his ear before he teleports. O’Reilly walks with Connors to the same location where Billy died and she plays into Tyrone’s plan by making Connors believe he is losing his mind. She brings him a sketch of Billy instead of Tyrone and says it looks like he wasn’t chasing anyone at Duane’s warehouse.

Tyrone appears and begins to run around the shipping containers, teleporting as Connors frantically chases and shoots at him. “My name is Billy Johnson," says Tyrone when he finally stops to confront him. "You took me. You took my life and it was a good life... I ain’t never gonna let you be, you hear me? Not until you admit what you did.” Connors believes he is going insane and admits to shooting Billy and burying his body. As Tyrone backs away, Fuchs appears and says he got the entire confession on video.

O’Reilly arrests Connors for Billy’s murder. At the police station, Connors gives Fuchs and O’Reilly an ominous stare after they share a kiss in front of him. For the first time, Tyrone is truly happy and feels like he finally got justice for his brother. He joins Tandy and her mother as they release a lantern in honor of their loved ones. Tandy is happy for his win, but she isn't so lucky in this episode after discovering that her father was abusive toward her mom. This led her to sell her father's incriminating evidence about the oil rig to Scarborough for a pay day. Oh, Tandy — sometimes you make terrible decisions.

The next morning, O’Reilly goes to Fuchs apartment to celebrate their win with a nice meal. But, she opens the fridge to find his frozen, bloodied body shoved inside. She’s horrified by this death and likely afraid that she's next. There are just two episodes left in the season, so the revelation of Fuchs killer should come soon.

Right now, all signs point to Connors. He has the motive to kill Fuchs because he helped with Tyrone’s plan. And, Connors has the connections to make it happen even if he is still being held in custody. He was able to make phone calls and rely on other shady New Orleans Police Department employees to help him cover up Billy’s murder. Some of those people are probably still on the force and privy to Connors dabbling in illegal drug operations. They would be happy to eliminate and cover up any threat that could expose them alongside Connors in covering up a black teen’s murder.

Connor’s arrest brings up a lot of questions. Did he have any involvement with Fuchs death or is there another enemy in the shadows? How will Tyrone’s parents react to this revelation about Billy? Will they apologize to Tyrone for not believing him? Can O’Reilly stay safe and continue to help Tyrone? And, if Connors is somehow not convicted, what will Tyrone do next? He chose the legal route along with some superpower scare tactics, but if the law fails him then he might take a deadlier approach toward justice. O’Reilly and Tyrone’s quest to bring Connors down is leading them down an increasingly dangerous path and only one side will be victorious.