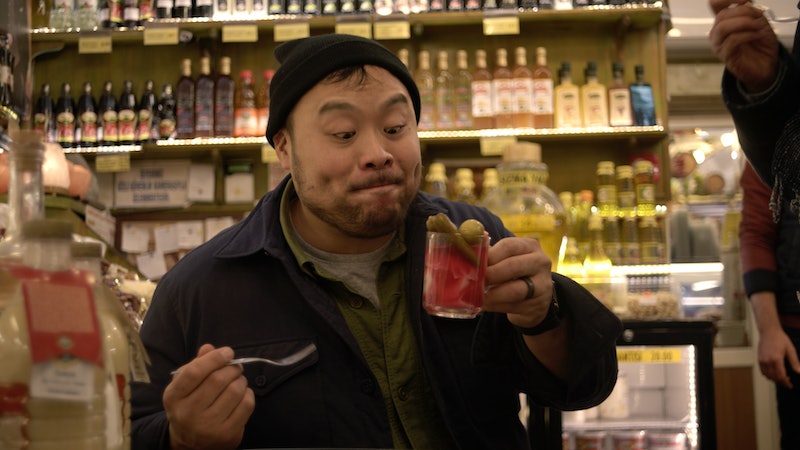 The second season of David Chang's Ugly Delicious features Padma Lakshmi and Aziz Ansari in India, comedian Nick Kroll telling Chang he looks like a baby, and earfuls of the celebrity chef's wheezy, satisfying laugh. The format is the same as it was in Season 1, with Chang traveling the world alongside famous friends and food professionals. Together they try new dishes that don't always look good, but renew the host's faith in the importance of cooking. So far the series has taken us to Tokyo, Istanbul, and Sydney, plus cities scattered across America. Still, there's plenty of territory left to roam if Ugly Delicious returns for Season 3.

The second season, which hits Netflix on March 6, features four episodes rather than the first season's eight, which could signal waning interest on behalf of either Chang or Netflix. But another probable justification lies in a personal event heavily foregrounded in the Season 2 trailer: the arrival of David Chang's first child with his wife Grace Seo Chang. Their son Hugo was born in early 2019, which means Chang simply may not have had as much time to film.

Since Ugly Delicious' first season dropped two years ago, Chang's metaphorical plate has only gotten more crowded. His newer Netflix show Breakfast, Lunch, and Dinner is another celeb-packed travelogue exploring food around the world. In the spring of 2018, he added a weekly podcast from The Ringer, in which he talks to other chefs about food issues in the news and their respective paths to the kitchen. More recently, in spring 2019, he opened Momofuku Kāwi, a new restaurant located in New York City's Hudson Yards, and a new Milk Bar in Harvard Square.

In reading the tea leaves on a potential third season, it's helpful to remember how news of the show's renewal was rolled out last time. Plans for this season were announced personally by Chang and his mom via Instagram on Thanksgiving 2018, nine months after the first batch of episodes hit Netflix. Which is to say, at least for a while, no news may be good news.