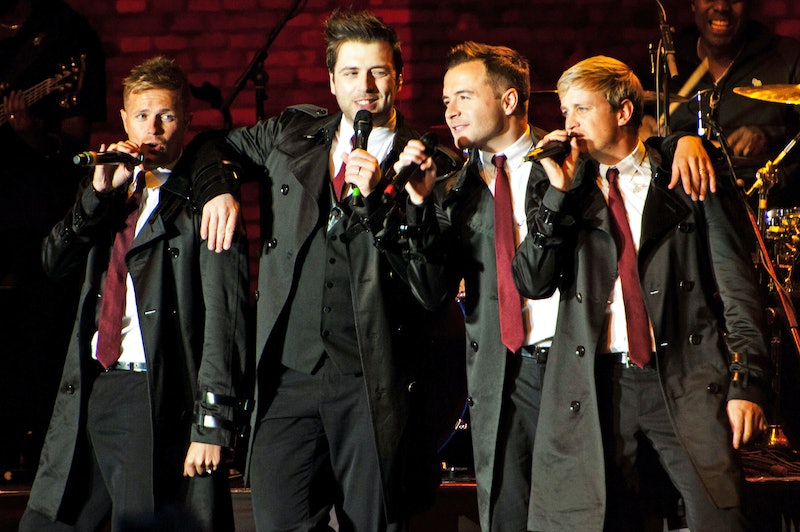 The Spice Girls, The Rolling Stones, Take That, and Busted have all done it. Even Destiny's Child managed to clear their schedules to get back together for one night. Now, it looks like a pretty iconic band from the '00s is going to be reuniting too to mark 20 years since they released their first album. Yes, Westlife have confirmed that they are officially getting back together. But, will Westlife tour the UK in 2019?

Firstly, can we all take a moment to digest this news; Westlife are getting back together. It's really happening. According to The Irish Sun, Nicky Byrne, Kian Egan, Mark Feehily, and Shane Filan are reuniting, however, a certain someone will be missing from the line-up. A source told the paper: "It's signed, sealed and delivered and it’s definitely happening — and it absolutely does not include Brian McFadden."

While it's a bit of a bummer McFadden is giving the reunion a miss, there's still lots to be excited about. And when I say lots, I do mean a certain upcoming tour. The source addd: "The other guys have been lined up to return to the studio and record some new songs and tour dates have even been organised, so it’s definitely going ahead this time."

Tickets for the Westlife 2019 tour have not yet been released. However, if you want to be the first to know when they do drop, sign up to Ticketmaster here for all the latest news about new releases. All you have to do is provide the site with your email address, and you'll be notified as soon as tickets go on sale.

If you're expecting to just hear the classics when the lads get back on stage, you'd be wrong. Turns out, in addition to reuniting, the boys are also working on new material. In fact, they're even reportedly teaming up with Ed Sheeran. A source told The Sun: "Having Ed involved is a huge coup. They think he will give them a contemporary edge for their reunion. They have already recorded the song and are delighted with the results. They’re just pulling together the final promo details including a video before they unveil it. It’s going to be huge."

I have contacted Westlife's reps for comment, however, a spokesperson is yet to get back to me. When they do though, you'll be the first to know.

This is not the first time that we have been teased with the prospect of Westlife coming together to tour the UK again. Earlier in 2018, their former manager, Louis Walsh told the Irish Sun that the band wouldn’t be touring until 2019 but, "it’s up to them to decide. I can’t tell me what they want to do."

Whilst dates are yet to be confirmed and tickets haven’t gone on sale yet, it looks like we will be seeing the Westlife boys donning their stools in arenas around the UK very soon. With new music on the way and collaborations with big names like Sheeran, this is definitely exciting times for old school Westlife fans. When the tickets are released you better believe I will let you know (as soon as I've booked mine that is).