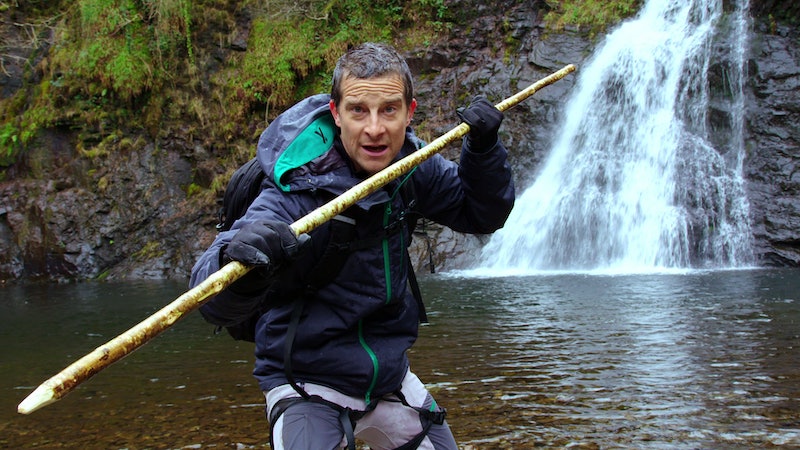 If you always wanted to head into the wild to tough it out like Bear Grylls, now is your chance. Netflix's new show, You vs. Wild, is a similar concept to Grylls' hit series Man vs. Wild, in which the famous survivalist tries to survive some of the gravest dangers nature has to throw at him. Except there's one major difference: this time, you control the outcome of the story. While watching, you're able to make decisions for Grylls, with the story unfolding differently based on those choices. It's a pretty innovate concept, and while it's not yet clear if You vs. Wild will return for Season 2, Netflix does have a number of similarly-minded shows lined up.

The streaming srvice first ventured into the world of interactive storytelling with the children's series Puss in Book back in 2017. Then in December 2018, they launched their first interactive adventure geared toward adults: Black Mirror: Bandersnatch. Unlike the sci-fi TV series version of Black Mirror, Bandersnatch is an interactive film that allows viewers to choose how the story proceeds, including many different alternative versions and endings.

According to the Netflix's Vice President of product, Ted Yellin, the company was pleased with the positive response to Bandersnatch. "We didn't know how it would go," Yellin said, per Variety. "Ultimately, the response was overwhelmingly positive. The internet exploded with conversation and delight."

Since then, the company has announced plans to further explore interactive storytelling, with You vs. Wild being their next endeavor. "We're doubling down on that. So expect over the next year or two to see more interactive storytelling," Yellin said during a keynote presentation at media and entertainment conference FICCI-Frames in March, per another Variety article. "And it won't necessarily be science fiction, or it won’t necessarily be dark. It could be a wacky comedy. It could be a romance, where the audience gets to choose – should she go out with him or him."

So, You vs. Wild is only one of many shows left to come. A Bear Grylls adventure is clearly a huge departure from the dark sci-fi of Bandersnatch or family-oriented stories of Puss in Book. However, if the interactive effect could appeal to both of those extremely different audiences, it has the potential to appeal to all kinds of viewers. Netflix has yet to reveal any other interactive projects they may have in the pipeline, but it sounds like they'll be coming soon. And as far as You vs. Wild specifically, the company will likely reveal any Season 2 news in the next month or so, based on when they usually announce renewal plans. It's also very rare that Netflix doesn't renew an original show for at least a second season, whether interactive or not, so You vs. Wild has a good chance of returning.

But even if it doesn't, you can expect to be choosing a lot more of your own adventures on Netflix in the coming year or so — and perhaps well beyond that.

More like this
Everything We Know About When To Expect The Rest Of The Upshaws Season 2
By Kadin Burnett
What’s New On Netflix: 'Stranger Things' & 'Mean Girls'
By Arya Roshanian
What’s New On Netflix: The Return Of 'The Umbrella Academy'
By Arya Roshanian
Everything We Know About When To Expect Money Heist: Korea Part 2
By Kadin Burnett
Get Even More From Bustle — Sign Up For The Newsletter