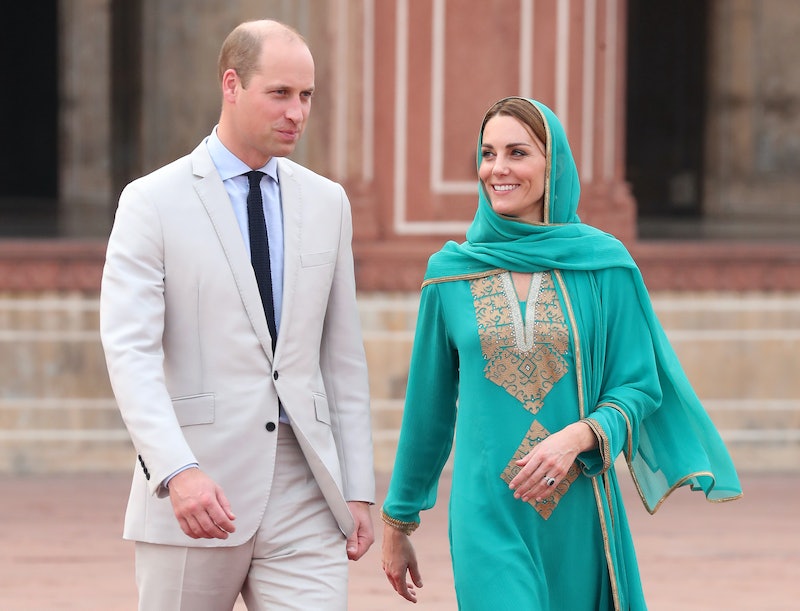 The Duke and Duchess of Cambridge have always had a jam packed schedule this month, and things show no sign of slowing down. Kate and William recently landed in Lahore, Pakistan, for the next stage of their royal tour. While in the city, the couple will follow in the footsteps of Princess Diana in visiting the same mosque and hospital she went to during her trip to the area in 1991.

Oct. 17 marks the fourth day of the royal tour in Pakistan. Kensington Palace said ahead of the trip "This is the most complex tour undertaken by The Duke and Duchess to date, given the logistical and security considerations." According to The Mirror, Kate and William have 1,000 police officers on hand during the tour.

This the first time in 13 years that British royal family have visited Pakistan, with Prince Charles and Camilla being the last to visit in 2006. In a statement about the trip, the palace explained that Kate and William's programme would "pay respect to the historical relationship between Britain and Pakistan," with a focus on "showcasing Pakistan as it is today — a dynamic, aspirational and forward-looking nation."

As the fourth day of their tour kicked off, royal correspondent for The Sun Emily Andrews took to Twitter to share the couples' itinerary for their time in Lahore.

According to Andrews, the pair started their day meeting the city's governor before visiting the SOS Children's Village, which was opened in 1977 and provides housing to orphaned children. The pair then went on to play cricket, at the National Academy of Cricket before visiting the Badshahi mosque.

Prince William and Kate will now visit the Shaukat Khanum Memorial Cancer Hospital, which The Daily Mail reports that Diana visited just a year before her death. The hospital was founded in 1994 by the current President of Pakistan and former cricketer Imran Khan in memory of his mother who passed away from cancer.

The royals Instagram uploaded a photo of Princess Diana with a child at the Shaukat Khanum Memorial Cancer Hosptial with the caption, "In 1996 and 1997 Diana, Princess of Wales visited the Shaukat Khanum Memorial Cancer Hospital, a state-of-the-art cancer facility located in the centre of Lahore. Over twenty years on, The Duke and Duchess of Cambridge will visit the children’s ward at the hospital today to spend time with patients undergoing treatment, and speak to their families."