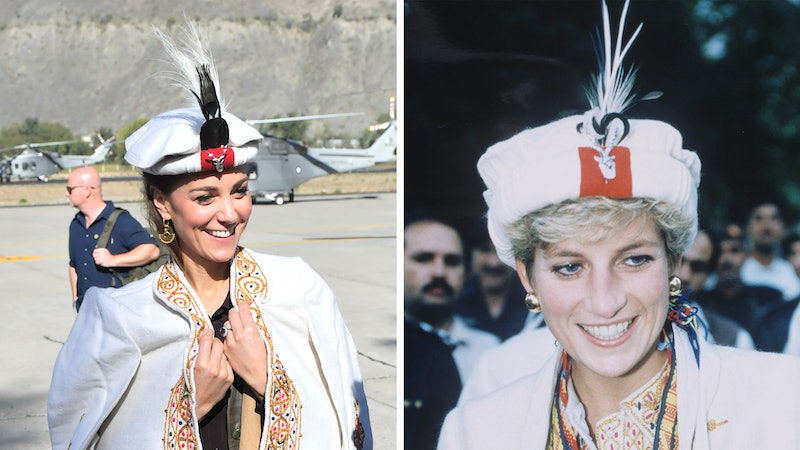 On the third day of their Pakistan royal tour, Prince William, Duke of Cambridge and Kate, Duchess of Cambridge, visited the Hindu Kush mountains. During the visit, Kate was given traditional Pakistani headwear that Princess Diana also wore during her visit to the same region in 1991. Kate was also gifted with a shawl while William received an embroidered cloak.

The hat is known as a Chitrali hat, named after the Chitral district that the couple were visiting. Kate's white design was adorned with peacock feathers and, per The Sun, is a regimental cap of the Chitral Scouts. The Pakistani embassy were unable to provide further details at this time, but, per the Afghanistan Analysts Network, the hat — also known as a pakol — is believed to have originated in Nuristan, Afghanistan, but was first produced in Chitral, Pakistan.

Pamir Times, a local news site for the mountain communities, describes it as a "men's hat" that is usually made of wool and designed in "earthy" colours such as grey, brown, or ivory.

The couple were in the region to witness the effects of climate change, states the Daily Mail. They were shown how the tip of the Chiatibo Glacier is melting and, later in the day, will visit local communities to see how they are dealing with the change. Kate and William will also watch an emergency response drill and see severe flood damage that has existed since 2015.

For the mountainous trip, Kate chose a suitably sensible look, consisting of all-brown pieces. She wore a long-sleeved brown shirt covered up with a leather vest from Really Wild. This was paired with a satiny midi skirt and Really Wild's suede knee-high boots which cost £315.

Before that, upon arriving in Pakistan,Kate was seen in a stunning blue-and-white kurti top and matching trousers. Designed by Catherine Walker, the ensemble was viewed as being similar to a pastel blue look Diana wore to The Shaukat Khanum Memorial Hospital in Lahore in 1996.

Kate's next look also had a touch of Diana about it. Sticking to a blue theme, it consisted of a fittingly royal blue kurta, trousers, and scarf — all designed by Pakistani talent Maheen Khan, per Harper's Bazaar. Diana wore an almost identical look in a different shade of blue (and with added flower motifs) for a Pakistan visit in 1997. Even Kate's beige shoes — which cost just £23.99 from New Look — harked back to Diana's beige footwear choice.

The Duchess has, of course, also showed off her own signature style on the trip. On Tuesday, she attended a reception held by the British High Commissioner to Pakistan wearing a dazzling sequinned green gown by Jenny Packham. As with almost all looks worn during a royal tour, Kate added a traditional touch, choosing a matching green scarf.

William and Kate's visit marks the first time a member of the royal family has been to Pakistan in 13 years, per Sky News. As ITV reports, the security for the couple's five-day tour is believed to be "the highest of any royal tour since the Queen's visit to Ireland." Due to security concerns, details of the couple's engagements are only being released on the day they take place.