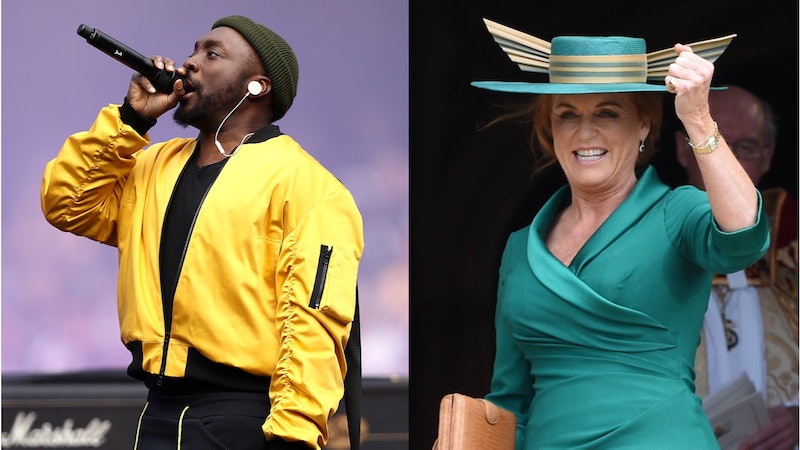 Everyone has a list of dream collaborators. Whether it's hopes of a partnership between your favourite fashion designer and actor or a musician and artist alliance, it's highly unlikely that a member of the royal family appears in your fictional line-up. Well, you might want to rethink your dreams because Will.i.am and Sarah Ferguson have collaborated and no one knows what to think anymore.

At the end of March, the 44-year-old singer was interviewed by the Daily Star Sunday. The topic of the other Fergie was, for some reason, brought up, resulting in this wonderful morsel of knowledge about the Duchess of York: "Fergie does poetry. She writes her own poems. And one time I was with her, she brought the topic up. She said to me: ‘Imagine my poetry over your beats.'"

Turns out Will.i.am no longer has to imagine it because Ferguson actually did it. Speaking on the ITV show Lorraine on Wednesday, he said the track was recorded "just for fun", signifying that there are no plans to release it. (Damn.) "I thought it would be fun as everybody knows me and [singer] Fergie but to have Fergie, the real Fergie, drop some poetry lyricals over my beats. She’s always been cool," he added.

However, in the Lorraine interview, Will.i.am told a slightly different story in that it was him who asked Ferguson to lend a poetic hand. But I suppose the issue of who came up with the idea isn't really the point. It's more the fact that a living breathing Duchess has made a song with Will.i.am.

According to the Daily Mail, the pair's friendship dates back to 1996 when Ferguson and former husband Prince Andrew visited Will.i.am's Los Angeles-based charity. In fact, the Duchess has even paid a secret visit to Will.i.am's school.

"She came to my ghetto, she came and visited my school, a couple of years back, taking that trip to LA — which she does often — but to come and spend some time with the kids who go to my school," he told Lorraine. "We didn't want it to be like a press thing. I want to impress my students. Not everything is about press. Some people need to be impressed and mentored."

The 59-year-old does have plenty of previous writing experience. She has published more than 40 books, including children's and lifestyle titles, reports the Daily Mail and is rumoured to be writing poetry with London-based charity and theatre group Chickenshed.

Will.i.am has already hinted at his desire to work with royal Fergie. Back in July 2018, he told The Sun that he was planning to ask the Duchess to step in for The Black Eyed Peas' Fergie on tour. “I was gonna call Princess Beatrice and take her mum’s offer up, we’re going to bring the Duchess in. I’m sure nobody will notice," he said.

The best part of all this? That in his Daily Star Sunday interview, Will.i.am referred to Sarah, the Duchess of York as his "home girl." May this friendship live forever.