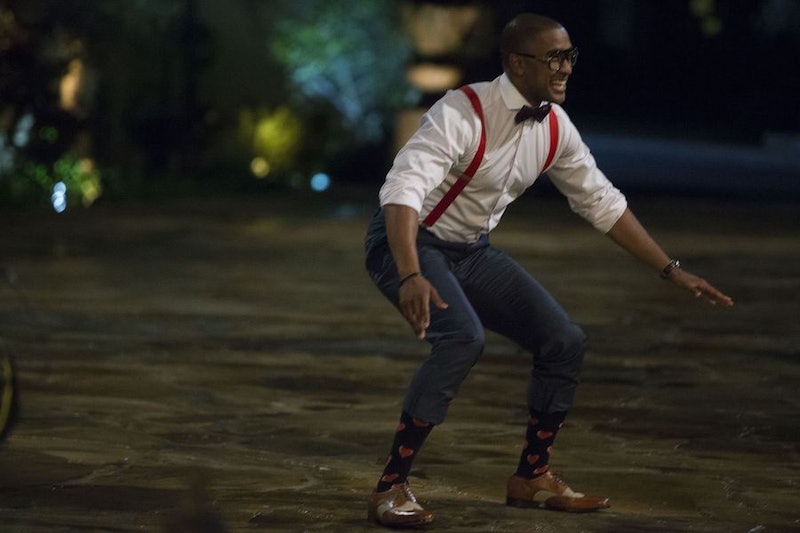 After dozens of seasons and hundreds of carefully crafted intros, how's a Bachelorette contestant supposed to make an impression anymore? Well, on the May 22 premiere of Rachel's Bachelorette season, one of her suitors went the nostalgia route. Will's Bachelorette limo entrance harkened back to the days of ABC's stellar TGIF family comedy lineup. (Network synergy!) He tried to show two sides of his personality and maybe make a memory for the overwhelmed Bachelorette with his Steve Urkel impression. Who knows? Maybe Rachel is such a '90s kid that she'll fall head over heels for the Family Matters reference alone.

Some contestants go for props, some for songs, some for heavy-handed pick-up lines. As bits go, Will's wasn't among the most grating. And I have to give him props for those cute heart print socks. As Rachel waited to meet the man, he stepped out of the limo with his pants pulled high by his suspenders, face obscured by thick-rimmed glasses, and executed a B- pratfall (You have to commit, Will!). He followed that up by the Family Matters standout character's catchphrase, "Did I do that?" in an impression of Steve's nasally whine. She has to react, because of the cameras and everything. But I don't know Rachel on a human-to-human level, so I can't tell you if her laugh was forced or not.

At the very least, she got it! Will returned to the car and, with the magic of Bachelorette editing, emerged looking dapper and much lighter on his feat. "I assume you're Stefan Urquelle now?" Rachel asked. Stefan was Steve's urbane and suave alter ego on Family Matters, which he scientifically created by — wait for it — altering his DNA. (TGIF was lit.) Being that the dated sitcom reference didn't fly over Rachel's head, these two might be well-matched. Shared TV tastes are very important in a relationship, after all.

I'll be watching to see if Will shares any other traits with either of the Family Matters characters he pretended to be during the limo entrance, and to find out whether Rachel is the Laura Winslow to Will's Steve/Stefan.