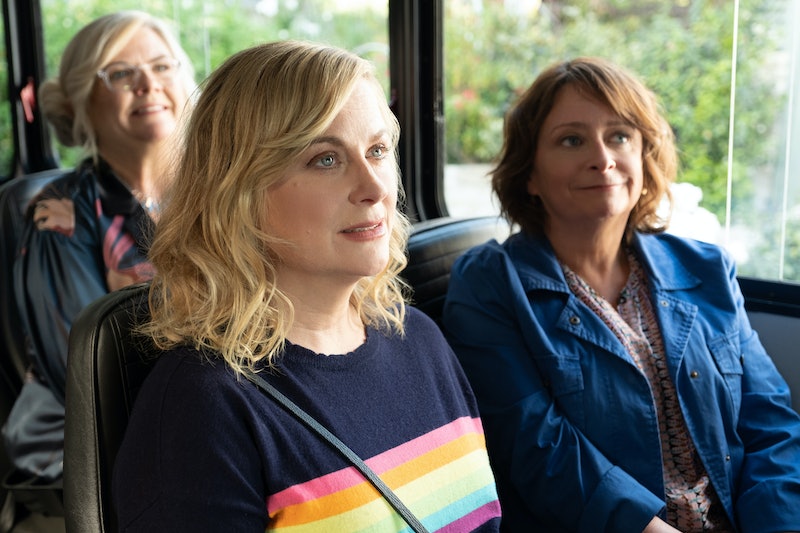 Colleen Hayes/Netflix
By Angelica Florio
May 10, 2019

Six longtime friends go to Napa for a 50th birthday celebration — what could go wrong? Well, if a movie portrays its female leading characters as realistically as Wine Country does, a lot of things can. But not only is it refreshing to watch a relatable group of friends enjoying one another's company and working their sh*t out together, but the Netflix comedy Wine Country is especially memorable for its depictions of middle-aged women as actual humans who must lean on one another to get through life's ups and downs, just like anyone else. Even better, it's a dream cast of Saturday Night Live alums who demonstrate that Hollywood roles for older women don't always have to be the main character's mom, wife, or grandmother.

Amy Poehler, Maya Rudolph, Rachel Dratch, and Ana Gasteyer, along with SNL writers Paula Pell and Emily Spivey, form the group of friends convening in wine country for Rebecca's (Dratch) birthday. Tina Fey plays a local loner, Tammy, and Broadway legend Cherry Jones plays an ominous tarot card reader. With a cast like that, you can't go wrong, but it's not just the tremendous — and of course, hilarious — performances that make Wine Country so good, it's the way the story frames each woman as such a well-rounded character with a lot going on.

I've always had a penchant for movies about older women. I remember first watching Calendar Girls and falling madly in love with the story of a group of proper British women who take tasteful nudes for a charitable calendar. I've long believed that Something's Gotta Give would be a much better movie if it included more scenes between the middle-aged sisters, Diane Keaton's Erica Barry and Frances McDormand's Zoe. Ageism in Hollywood affects women more harshly than men, and it often leaves older women, like my own mom, feeling left out.

Sporadically, there are the ensemble movies about older groups of friends that come around, like The Best Exotic Marigold Hotel and more recently, Book Club and Poms, but those movies tend to focus on people facing what happens after retirement. While those movies are certainly necessary in representing a stage of life where some can feel lonely or forgotten, there aren't a lot of movies about the stage in life before that, at least in terms of friendship and individual goals over the usual family drama. Wine Country resembles The Sisterhood of the Traveling Pants more than it does Divine Secrets of the Ya-Ya Sisterhood. There's even a perfect Traveling Pants joke delivered by Fey's curmudgeonly character, Tammy.

The comedy doesn't ignore the women's experiences with aging, but it doesn't make their age their defining characteristic. Once a woman reaches 40, she doesn't lose who she was before and become only a side character to someone else's life — in fact, oftentimes the opposite can happen. I know that my own mom gained a new sense of freedom when my sister and I graduated from high school and moved out to attend college, and it allowed her to rethink her career path and even make a daring change.

In more recent years, my mom even moved to Los Angeles from our small town in Oregon to work as a high-level director of a hospital, after starting off as a nurse practitioner. Wine Country doesn't focus on women looking back at their lives as if they're at the peak of a mountain, reminiscing on their past. A few of the film's characters, like Abby (Poehler) and Rebecca (Dratch), are even facing new beginnings after certain jobs and relationships end.

Abby and Rebecca's stories aren't over just because certain aspects of their lives are changing. The comedy's story is one about how life's winding road takes unexpected detours, but how certain friendships remain consistent. One of my favorite scenes is when Abby and Catherine (Ana Gasteyer) are walking in a vineyard — where they're not supposed to — playing a game called "Path Not Taken." Abby says she might have worked in a bookstore, while Catherine could be a Zamboni driver in some alternate reality. That game, and the way that Abby and Catherine are simply having fun and enjoying each other's company reminds me of how me and my friends are during weekend getaways.

I have always wanted to be friends with the women I got to know through SNL, as I'm sure so many other people do too. And Wine Country only further cements that desire. I want to grow old with them, because they make growing older and still growing up look so fun. The characters joke about preferring to listen to podcasts over micro-dosing and Dratch delivers one of the most hilarious lines I've ever heard in my life: "Put me in my finest muumuu!"

Sure, there are backaches and some reminiscing about "the good old days," but Wine Country shows middle-aged women making brand new, amazing memories that just add on to the ones they've already accumulated together. And it's not a bad future to look forward to.