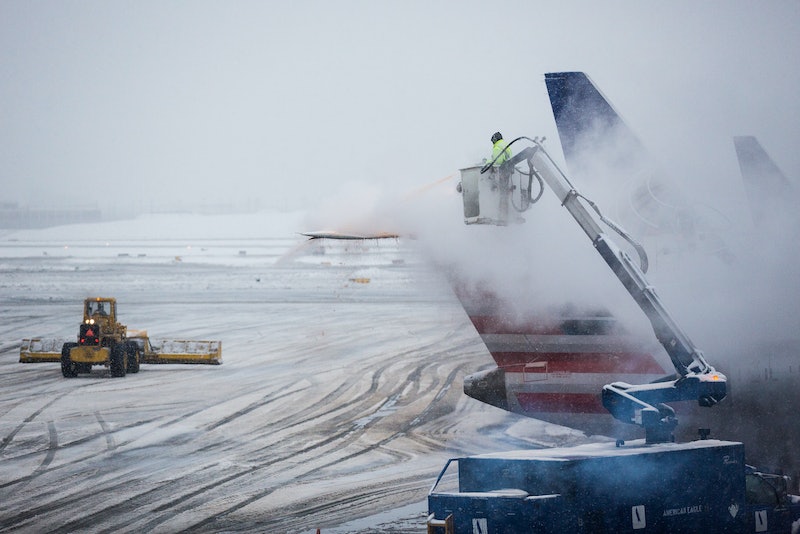 Winter Storm Diego has covered swaths of the South in snow, and the precipitation continued to fall on Sunday in parts of Georgia, the Carolinas, and Virginia. For those who can stay inside, the view outdoors is a winter wonderland. But for those who are traveling this weekend, the storm has created more of a headache. More than 1,000 flights were canceled due to Winter Storm Diego.

The two biggest airports in the affected region were canceling flights left and right. Charlotte Douglas International Airport, home to American Airlines' second-largest base, saw some 1,130 flights canceled on Sunday, according to FlightAware. Meanwhile Raleigh-Durham International Airport had some 240 cancellations as of 4 p.m. ET on Sunday.

American Airlines posted a travel alert stating it was offering free changes to travel plans — even on itineraries normally subject to a change fee — for trips beginning or ending in another one of the airports in the region, everywhere from Knoxville, Tennessee, to Roanoke, Virginia.

The airline with the most flights canceled in the country was technically not American Airlines, but rather one of the company's regional carriers, PSA Airlines, which flies under the brand American Eagle. According to FlightAware, the airlines saw 500 cancellations, followed by American's 412, and Southwest's 127.

Many of the cancellations were decided before the storm hit, but conditions were expected to worsen over Sunday. "There has been between six and 12 inches in the main swath of the mountains," Patrick Burke, a National Weather Service meteorologist told Bloomberg. "We’re going to see deterioration of conditions throughout the winter storm area through Sunday — we’re just adding to the amount that’s on the ground and clinging to the trees and power lines."

The National Weather Service forecast Winter Storm Diego "to continue, especially across portions of the North Carolina and Virginia," as of Sunday afternoon. The government agency said to "expect near-impossible travel conditions and numerous power outages."

In addition to the flight cancellations, power outages were frequent through out the area. In just the Carolinas, 290,000 customers were without power, a Duke Energy spokesperson told The Asheville Citizen-Times.

Area governors, including Virginia Gov. Ralph Northam and North Carolina Gov. Roy Cooper, were calling states of emergency in advance and during the storms. "Snow may be beautiful, but it can also be treacherous and I urge North Carolinians to take this storm seriously and get ready for it now," Cooper said on Friday.

Northam's declaration, meanwhile, was in part meant to help with transit. "I am declaring a state of emergency to ensure localities and communities have appropriate assistance and to coordinate state response to possible snow and ice accumulations, transportation issues, and potential power outages," Northam said Saturday.

Flights were expected to be affected on Monday, too, before fully resuming on Tuesday.