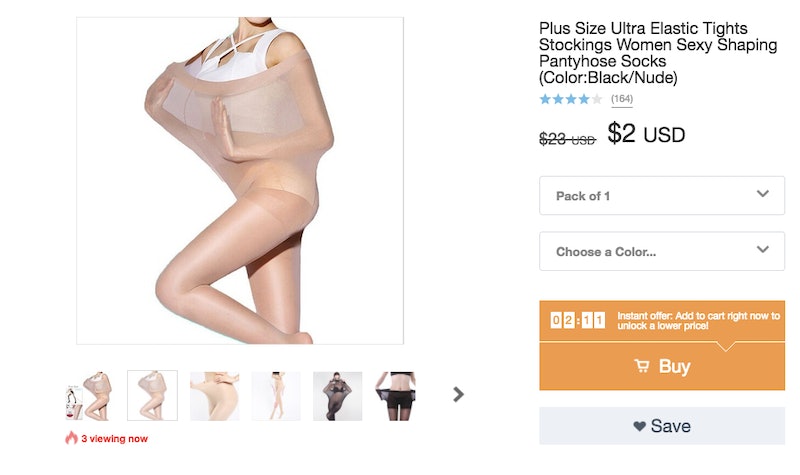 Another day, another body-shaming ad. And it's honestly getting exhausting. The latest incident of body shaming revolves about tights, a discount site, and what can only be described as tone-deafness. Wish advertised plus size tights on thin bodies, showing models stretching the tights up over their shoulders — and Twitter is outraged. The incredibly questionable choice to use straight size models in marketing for plus products is either a ploy for clicks or a sign that the team at Wish should consider hiring a few plus size women.

Unfortunately, the ad has become a bit of a viral sensation. But social media's response to the ad appears to be overwhelmingly negative — and that's good at least, right?

It is, however, important to note that, as Twitter users note, the images aren't original to Wish. Allegedly, the photo was pulled from another advertisement for durable tights, not plus size tights. However, Wish still seems to have believed that the image was an appropriate way to market tights to plus women. And let's just say, it wasn't.

As of press time, Wish has not addressed the backlash over the advertising, and the product is still available on line for purchase. However, the court of Twitter has definitely spoken, and the brand is guilty of insensitivity and fat shaming.

Some Twitter users went so far as to call the advertisement dangerous, and they're not wrong. Fatphobic content is in no short supply on the internet, and this has all the signs of fat shaming. Even if the image is not from Wish, the e-commerce site still chose to use the image as an offensive way to sell a product to plus women.

Others keenly pointed out that someone should have caught the image before it hit the site. Since Wish has yet to comment on the image, there's no way to know the rationale behind the choice, but there's honestly not a lot — or anything — that could justify use of the image.

Regardless of intent, there's an inherent meaning behind the use of straight size women to market plus clothing, and it's that fat is not okay. Businesses are erasing the fat body by choosing to not even allow plus size clothing to be modeled by plus size women. News flash, being fat is totally okay, and shopping for plus size tights shouldn't be a controversial or triggering moment for fat people.

Of course, the most obvious question about the ad is why not use an image of a plus size model? Even if Wish did allegedly use a photo for a different product, couldn't they have found one of a plus person in tights? Plus people in tights aren't unicorns. They exist.

While the outrage on the internet regarding Wish's plus size tights advertisement is encouraging, seeing the image used in this way is definitely not. Not only does it showcase a disregard for the potential feelings of plus people, but it also erases fat bodies.

Whether or not you believe the controversy is warranted, it's a moment that intimately impacts plus people. Sure, it's a silly photo and probably just an oversight — albeit a big one. But it deserves to be denounced for its insensitivity. Period.