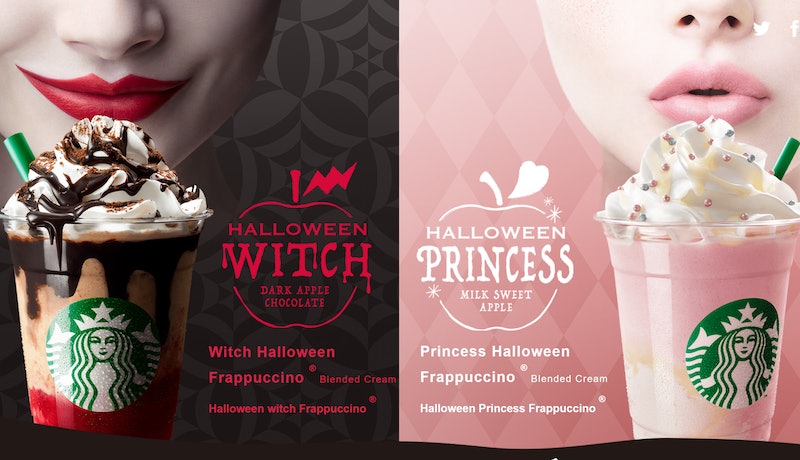 With just two short weeks left to go before Halloween, it seems like the whole world is in full spooky swing — and if you happen to be in Japan, there’s a new way to join the club: Starting on Oct. 18, you’ll be able to get Witch and Princess Frappuccinos at Starbucks Japan in honor of the 2018 Halloween season. Naturally, they’ll only be available for a limited time; an end date hasn’t been announced, but it’s probably fair to assume that they’ll disappear not too long after Oct. 31. I don’t know about you, but for me, this is all just one more reason I desperately want to travel to Japan, preferably right this very minute.

In the United States, Starbucks has been synonymous with fall since the introduction of the Pumpkin Spice Latte to the seasonal menu in 2003. In recent years, however, the coffee giant begun dabbling in ultra-limited-edition drinks offered for an even briefer time around Halloween, all Frappuccinos and each with a spooky bent. In 2014, the Franken Frappuccino became the first of the bunch; bright green in color, it blended a Green Tea Frappuccino with peppermint syrup, white chocolate sauce, and java chips, topping the whole thing off with whipped cream. The Frappula Frappuccino followed; available during both the 2015 and 2016 Halloween seasons, this one blended together white chocolate sauce, milk, and ice, layered it atop mocha sauce and whipped cream, and finished it off with a drizzle of strawberry purée and more whipped cream. And last year, we saw the arrival of the Zombie Frappuccino, green apple-and-caramel-flavored Frapp topped with a red mocha drizzle and pink whipped cream “brains.”

Knowing all of this, then, it’s not surprising that the international Starbucks menus would begin getting in on the Halloween fun — although it’s notable that this year’s seasonal menu in Japan isn’t limited to just one Frapp. We’ve got two to enjoy, both of which will be available at Starbucks locations in Japan starting on Oct. 18.

Both the Halloween Witch Frappuccino and the Halloween Princess Frappuccino are apple-based; however, lest you think, “Apple and coffee? Together? Uh… no thanks,” rest assured that these two Frapps aren’t coffee Frapps; they’re Crème ones, which means there’s no coffee in sight. (In that sense, they’re not unlike the Zombie Frappucino). That’s all I could tell immediately from the Starbucks Japan website, though; Google Translate’s English version of both it and Sbux Japan’s Instagram page are hilariously garbled, so I had to go elsewhere to find a description of the drinks that I could actually read. (Alas, “Witch is stewed, of purring apple compote” did not mean much to me. Translation software has been improving, but it still has a looooong way to go.)

Luckily, though, Hypebae was happy to oblige: According to the commerce and news site, the Witch Frappuccino consists of “a bold red apple compote, layered with a crumbled caramel cookie that’s blended with milk” and finished off with a swirl of chocolate sauce and whipped cream; meanwhile, the Princess Frappuccino starts with an apple compote base which is “fused with milk and white mocha sauce” before being topped off with whipped cream and edible pearls. According to Hypebae, the apple flavor was chosen as the base for both as a nod to that perennial Halloween favorite, the candy apple.

Oh, and hey, guess what? There’s more on the menu than just the Witch and Princess Frappuccinos; Starbucks Japan also has Witch and Princess doughnuts. Like their frozen, blended counterparts, they’re apple-flavored, with each option putting a different twist on the idea: The Witch doughnut is topped with chocolate and crispy cocoa cookie crumbles, while the Princess doughnut is smothered in pink frosting and finished off with edible glitter and pearls.

The ad campaign for the Frapps (and, by extension, the doughnuts), keeps asking folks which one they would choose — the dark and mysterious Witch Frappuccino or the pretty, pastel Princess Frappuccino — but honestly, I don’t think you really have to limit yourself to just one. I mean, personally, I want to get both, pour them into one cup, and make a Witch Princess Frappuccino, because being a witch princess sounds like way more fun than being a witch or princess.

Unfortunately, though, all I can do is dream; these two treats are only available in Japan. But hey, the good news is that there’s a pretty high possibility we’ll have a spooky Frappuccino of our own arriving at U.S. Starbucks locations in the coming weeks: Not a season has passed since 2014 without the introduction of a Halloween treat to the seasonal Starbucks menu, so odds are good that 2018 will follow the trend. I’ll keep my ear to the ground — and in the meantime, I’ll satisfy my Halloween sweet tooth some other way. You win some, you lose some, right?