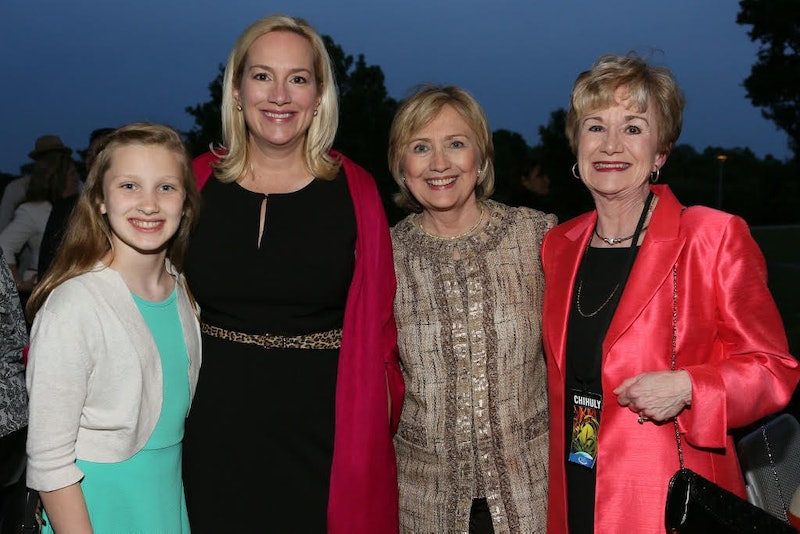 In the '80s, when I was a teenager growing up in Russellville, Arkansas, my mother took me to the governor’s mansion for the First Lady’s Tea. It was there that I first met Hillary Rodham Clinton, a graduate of Yale Law School, the first female attorney to be named full partner at the prestigious Rose Law Firm, and the wife of Arkansas's young Governor, Bill Clinton. In a small state, our elected officials are accessible, so it wasn't that uncommon to meet a First Lady. But I distinctly remember thinking that Hillary was one of the most remarkable women I'd ever met.

She was unconventional. For one thing, she’d caused quite a stir in our state for keeping her maiden name. And as governor's wife, she was determined to take on issues of substance and strategy. She led many of the statewide efforts to reform education and improve healthcare in rural areas. She was a phenomenal force for good, always championing those who typically didn't get a seat at the table. You couldn't help but want to be part of the effort.

Now a mother of three daughters, I try to instill in them the same lessons in resolve and resilience I continue to see in Hillary Clinton.

In the summer of 1991, I volunteered for Bill Clinton’s presidential exploratory committee. I was hired as a campaign staffer, and got a position in the campaign’s scheduling office. As I continued to work with the Clintons, I became even more in awe of Hillary, who continued to hold her own under pressure. She was compelling. Always well prepared, Hillary was an expert on pretty much every subject matter, which a lot of folks underestimated in her.

After that, it was on to the White House. As Assistant to the President and Director of Scheduling, I had a front-row seat to history as Hillary redefined what it meant to be First Lady. She led the charge on high-profile policy issues across the country, like working with Republicans and Democrats to establish the Children's Health Insurance Program, which continues to allow low-income children to access critical healthcare.

During the White House years, I watched Hillary balance her personal role as a mother with her official role as First Lady. While others talked about social change, Hillary embodied it. She was an advocate for the women who worked in the White House. She firmly believed that women we were more than capable of being successful in the workplace while prioritizing our families and personal lives.

I witnessed firsthand the major advances for girls and women during the Clinton administration. I know it would not have been possible without Hillary. Against the advice of some White House aides, who said a First Lady should not dive into delicate diplomatic issues, she led the U.S. delegation to the United Nations’ Fourth World Conference on Women in Beijing. I'll never forget when she proclaimed that “women’s rights are human rights" — a historic and transformative moment in the global women's movement that sparked action and still remains a rallying cry.

Empowering girls and women remained Hillary's focus after the White House, too. At the Clinton Foundation, she and Chelsea launched Too Small to Fail, an initiative to support early childhood education, and No Ceilings: The Full Participation Project. With partners that included the Gates Foundation, the report compiled data on the progress women and girls made in the twenty years since that Fourth World Conference on Women in Beijing.

Her unwavering efforts to give all people, especially girls and women, opportunities to live up to their full potential has motivated me for decades. Now a mother of three daughters, I try to instill in them the same lessons in resolve and resilience I continue to see in Hillary Clinton. To be fearless. To not be afraid of failure. And, when you do fail, get back up and keep going.

There are now several generations of women and girls standing on the shoulders of Hillary Clinton and her legacy of empowerment. I am grateful to be one of them. And I pray every day that my daughters, and young girls everywhere, will be just as bold.

More like this
We’ve All Had Bad Sex. Nona Willis Aronowitz Is Talking About It.
By Sophia Benoit
It’s Official: 'The Bachelorette' Is No Longer A Fairy Tale
By Samantha Allen
Why Eurovision 2023's Host City Won’t Be Revealed For A While Yet
By Sam Ramsden and Rachel Mantock
The 5 Best Underwear For Preventing Wedgies
By Lisa Fogarty
Get Even More From Bustle — Sign Up For The Newsletter