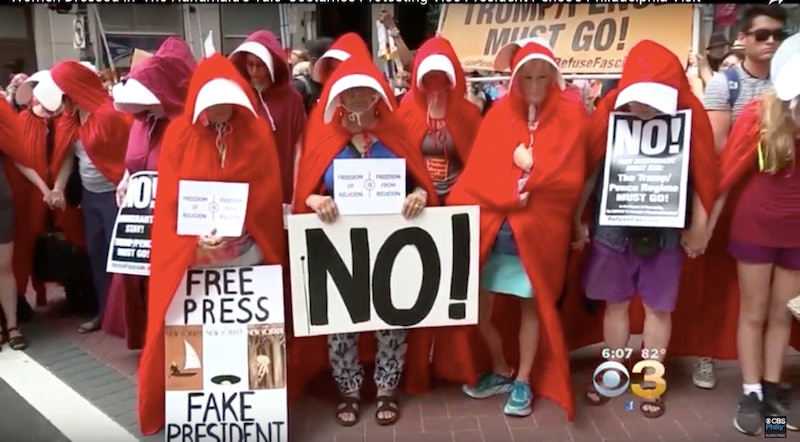 It's not the vice president's first visit to Philadelphia this summer, but it is the first in which protesters from the City of Brotherly Love have shown up in shock-red dystopian garb. On Monday, a group of protesters dressed as "handmaids" welcomed Mike Pence to Philadelphia as he arrived to show support for a Pennsylvania GOP Senate candidate, The Hill reported.

But unlike most protests, this one had none of the chants or noise associated with public pushback. Instead, the protesters, draped in red cloaks and winged bonnets, clasped hands and stood in silence outside of Union League Monday evening, where Pence was hosting a fundraiser for Pennsylvania GOP Senate candidate Lou Barletta, according to The Hill.

“We just felt that the visual of the Handmaid’s Tale costumes, a society in which women in Gilead are stripped of their most basic rights and their humanity, was appropriate,” said Sam Goldman, who is with Refuse Fascism, the group behind the protest, according to The Philadelphia Inquirer.

Refuse Fascism describes itself as the "only organization with the vision and viable plan to drive out the Trump/Pence regime through non-violent, sustained mass resistance." The group is a part of Philadelphia’s chapter of the National Organization for Women and the Delaware County chapter of NOW.

Before the event, about 100 women had signed up to dress as handmaids, said Goldman, according to The Philadelphia Inquirer. Goldman described the past few weeks in which women who planned to participate in the protest had gathered in living rooms and coffee shops to sew the crimson costumes and white bonnets.

The costumes are based on Margaret Atwood's 1985 novel The Handmaid's Tale and subsequent streaming Hulu show, which explores a nightmare world in which the United States has turned into a military dictatorship called the Republic of Gilead. Women have severely reduced rights, and those who have the ability to bear children are forced into regimented sex schedules with high-ranking men. Protesters have drawn similarities between the political trajectory of the United States and Gilead, saying the Trump administration is heading in an "anti-woman" direction.

Atwood, a Booker Prize award winner, also gave a harsh indictment of the United States' direction earlier this year, saying she believes the country has "Gilead-like symptoms," citing attacks against the press, an attempt to squash reproductive rights, and sexual harassment.

“We’re not living in Gilead yet, but there are Gilead-like symptoms going on,” the Canadian best-selling writer said.

Pence has been a steady champion of anti-abortion laws for decades. During the 2016 campaign, Pence said that he would like to see the Roe v. Wade ruling end up on "the ash heap of history," and that desire hasn't changed; Pence recently revealed he's still set on seeing the landmark ruling that legalized abortion nationwide overturned.

"Stripping women of their rights ... if and when they bear children, is really forced motherhood," Goldman said to CBS Philly. Refuse Fascism has called the vice president "one of the most dangerous reactionary figures in modern history" on its website.

The last time Pence visited Philadelphia was on June 19, when he was also greeted by hundreds of protesters. At Rittenhouse Square, demonstrators lined up children’s shoes to castigate President Trump’s family separation policy, in which he split migrant children from their parents at the U.S.-Mexico border.

Monday's Handmaid's Tale protest in Philadelphia is the latest one in a string of cardinal-cloaked protests across the nation. The dress has become a familiar go-to for female groups, from Washington, D.C. to England, reported The Philadelphia Inquirer. Earlier this year in March, women donned the Handmaid’s Tale serape in Texas to speak out against their state Senate's legislation limiting abortion access. In May, red-robed women in Missouri also demonstrated at their state Capitol to protest legislation curbing reproductive rights.