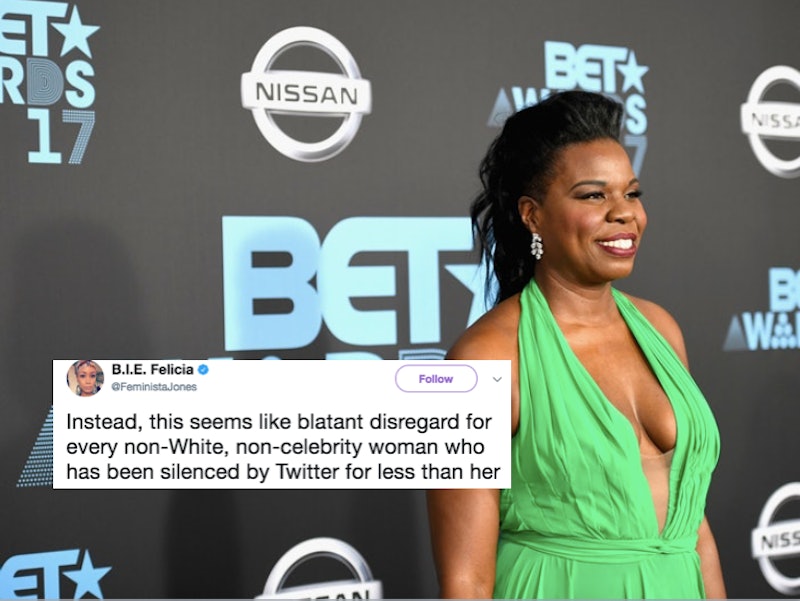 After actress Rose McGowan was suspended from Twitter Wednesday, it didn't take long for people to start protesting her suspension with a boycott that went viral. But not long after, women of color began pointing out a major problem with the #WomenBoycottTwitter movement: The level of public support and outrage McGowan is receiving — while arguably justified — is rarely extended to women of color who are bullied and harassed. People of color face online harassment at such high rates that there's even an app for Black Twitter users who want to escape trolls.

McGowan was suspended after the social media site claimed she posted a private phone number. She has spent much of this week criticizing Harvey Weinstein, the Hollywood exec who has been accused of sexual assault by prominent celebrities and aspiring actresses alike. Weinstein reached a settlement with McGowan in 1997 that "not to be construed as an admission” that he had assaulted her, but rather “avoid litigation and buy peace,” according to a legal document reviewed by the New York Times. When McGowan announced her account had been suspended, people expressed outrage on her behalf. The idea of boycotting Twitter in solidarity quickly gained traction, and #WomenBoycottTwitter began trending on the platform. Chrissy Teigen, Alyssa Milano, and Kathy Griffin have all said that they're on board with the protest, joining thousands of women who are promising to stay silent in response to McGowan's punishment.

But many other Twitter users are noting that this outpouring of solidarity has not yet been extended to outspoken, prominent Black women, who have also been the target of abuse on the social media site. ESPN commentator Jemele Hill was forced to apologize and insulted by President Donald Trump after she called the president a white supremacist in a personal Tweet. Even worse, she's received despicable hate messages from racists, with one person even going as far as to call her a "thick-lipped gorilla."

Actress Leslie Jones was the victim of a harassment campaign when users sent her racial slurs and even hacked her personal website to leak nude photos and personal information. The trolling was so hateful she considered deleting her account to escape it. Twitter did suspend alt-right blogger Milo Yiannopoulos for his role in abusing Jones, a rare move for a platform that has historically taken a hands-off approach to hate speech. Still, women of color have questions: Why didn't white women abandon Twitter en masse when celebrities like Hill and Jones were being harassed and unfairly treated? What about when a 20-year-old college student came under fire from racists who claimed she was admitted to Cambridge University to fill diversity quotas?

Granted, McGowan's account was suspended, while Hill's and Jones' were not, which could explain the level of solidarity people are expressing, but she's not the first woman to be suspended by the platform for content that's seemingly unoffensive. A Black teenager was suspended from Twitter last year after posting a makeup tutorial where she jokingly painted her face white as a response to Trump winning the election. Twitter has a long history of arbitrary suspensions. It just so happens that a famous white woman was the target this time around.

Some women of color have responded to what they see as a problematic boycott with a unique solution: Since so many people are boycotting Twitter, it's a perfect time to fill timelines with women of color worth following, according to blogger and activist Imani Gandy.

By late Friday morning, #WOCAffirmation was also trending on Twitter. Women of color are sharing everything from Etsy shops to upcoming book releases and encouraging people to follow more women of color. It's an interesting contrast: While some people have gone silent on Twitter to decry harassment, women of color are putting in the work to make the platform a more diverse place for users and help fellow women gain business and followers. As author, social worker and activist Feminista Jones shared in a Twitter thread, not only are women of color systematically ignored, but boycotting Twitter isn't realistic for people who rely on the social network for income. Additionally, asking silence of a marginalized that's often unwillingly silenced — Sen. Kamala Harris being repeatedly interrupted by white, male senators is just one example — is hurtful. There's nothing wrong with a protest, but for it to be effective, it needs to be intersectional, with women of all races and backgrounds valued and included.