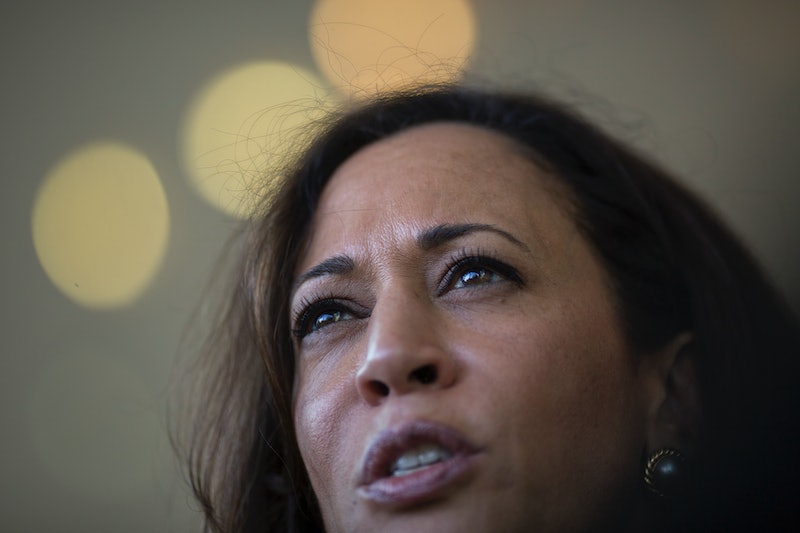 When Republican lawmakers attempted to silence Sen. Kamala Harris during Tuesday's Senate testimony on the Russia investigation, they inadvertently handed her a megaphone. The freshman senator from California is now at the center of one of the most talked-about moments from Attorney General Jeff Sessions’ Senate Intelligence Committee hearing after her pointed line of questioning drew rebukes from her colleagues.

Much has been said about how Harris — a former prosecutor and a woman of Indian and Jamaican descent on the nearly all-white and all-male committee — was interrupted by fellow senators in a way her colleagues were not. To some, Harris is the victim of sexism and possibly racism in America’s premiere boys’ club. To others, Harris is the aggressor whose unrelenting line of questioning flustered the Attorney General. In a confounding loop of logic, Harris’s critics are playing both sides at once by accusing the Senator of harassing the A.G., then playing the victim.

Buried beneath all the noise lies the heart of why Harris was silenced on Tuesday: she was in the midst of striking a major blow to Sessions’ testimony, a move that would have brought Sessions’ credibility to its knees. Instead, Republicans cut Harris off at hers.

She was in the midst of striking a major blow to Sessions’ testimony, a move that would have brought Sessions’ credibility to its knees. Instead, Republicans cut Harris off at hers.

Harris began her questioning by asking Sessions, a 10-year veteran of the Senate, if he had refreshed his memory by reviewing any documents in preparation for his testimony.

And that's basically as far as she got. While every lawmaker on the committee is entitled to five minutes to question the witness, Harris got tied up in a back-and-forth over "a longstanding Department of Justice policy" Sessions had using as cover for not disclosing the content of his conversations with Trump. Sessions maintained he was "not able to comment" or "not able to discuss" certain things, and Democrats seized on it. Harris was in the midst of pressing Sessions to name that policy, explain it, and say whether he's reviewed it since when Sen. John McCain cut her off.

"Chairman," McCain protested to Sen. Richard Burr amid Harris's questioning, "The witness should be allowed to answer the question."

"Senators will allow the chair to control the hearing," Burr replied. "Senator Harris, let him answer."

In the pursuit of a one-word answer from Sessions, Harris dropped the mic with two more: "Please do."

Harris eventually got a "yes" from Sessions — he said he did consult that unnamed policy before appearing before the Senate Committee Tuesday — viewers were left wondering why an Attorney General with 35 years of legal experience needed McCain to come to his defense.

The exchange marked the second time in as many weeks that Harris had been interrupted. During another public hearing, Harris questioned Deputy Attorney General Rod Rosenstein, to similar results. In the days since, she's won props from Sen. Elizabeth Warren, another Democratic women rebuked by the G.O.P for her words.

That's not just a stat for bros in board rooms. Peek behind the red velvet curtains at the United States Supreme Court and you'll find male justices interrupting the female justices at that same three-to-one rate, according to a study published this year. During the final presidential debate last October, Trump interrupted Hillary Clinton four times more often than she interrupted him; Trump made 37 interjections to Clinton's nine.

Research shows that women talk less than men at work and account for only a quarter of all talking during large meetings, according to one study. There's a stat to pass on to Uber board member David Bonderman, who said this week that having more women represented on a board leads to more talking. (The ride-sharing company's board had been comprised only of men until last year, and the company has faced an onslaught of sexual harassment charges.)

In the past week, women and men have been making their voices heard on Twitter, on television, and in Harris's campaign coffers. With decades of research to back up the pattern, it's time to move the conversation from "when," "why," and "how many times" women are interrupted and get back to the point: that is, the point they were trying to make in the first place.