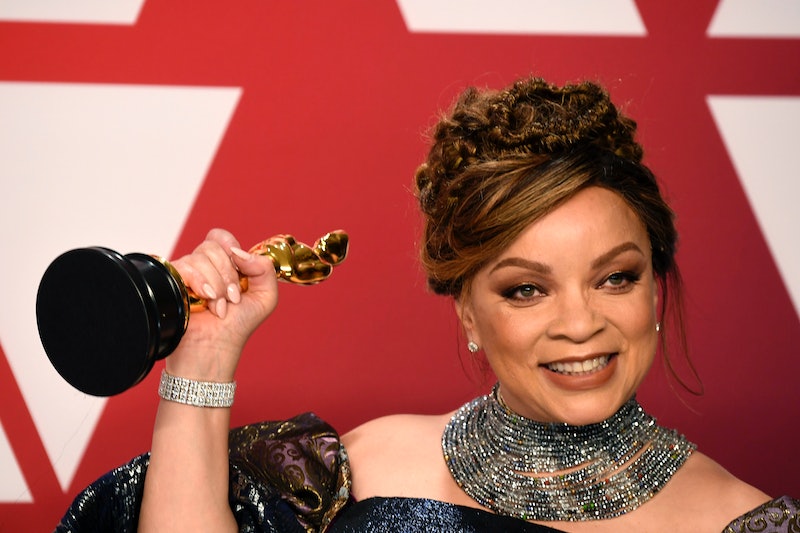 On Sunday, Feb. 24, women of color made history at the 91st Academy Awards. Winners like costume designer Ruth E. Carter and production designer Hannah Beachler broke glass ceilings for black women in technical categories, but it's worth noting that many of these important wins were also a product of opportunity. Women of color thrived at the 2019 Oscars in categories where white women were already seen as competitors. Meanwhile, major categories including Best Director, Best Picture, Best Screenplay, per Sunday's results, might be slowly diversifying in terms of ethnicity, but still remain a boy's club.

And while these firsts have been a long time coming, it's important to note that both Costume Design, Production Design, and Best Animated Short are spaces where women have been allowed to succeed in Hollywood. At least one woman has been nominated for Best Production Design every year since 1981 — Sandy Reynolds-Wasco was the last woman to win for La La Land in 2016. According to Wikipedia, at least one woman has been nominated in the Best Costume Design category every single year since it began in 1948. In other words, these are categories that had already opened their arms to women in the industry, just not to women of color. And it makes sense that women of color would be finally allowed to succeed in categories that have already proven themselves to be female-friendly.

Seeing women of color dominate the 2019 Oscars in places where they simply haven't before, specifically for jobs behind the camera, is also a good sign for the future. To have women of color representing those specific careers on a global stage is important as it could very well inspire other women of color to follow in their footsteps. "I want all the young women of color and girls of color to be able to now stand on my shoulders," Beachler said in a backstage interview with Good Morning America.

But while it's true that white women may have normalized the idea of women in these specific Academy spaces, it's also true that these important and historic wins for women of color would likely not have been possible without two very important women acting behind the scenes: April Reign, the creator of the #OscarsSoWhite, and Cheryl Boone Isaacs. In fact, Spike Lee, who won his first Oscar for Best Adapted Screenplay with BlackKklansman made sure to acknowledge them after his win.

Speaking to reporters backstage, Lee said, "Here's the thing. Without April Reign [of] #OscarsSoWhite and the former president of the Academy of Motion Pictures and Sciences, Cheryl Boone Isaacs, I wouldn't be here tonight," per Entertainment Tonight. "They opened up the Academy to make the Academy look more like America — it's more diverse." Lee went on to note that three black women won Oscars that evening — a stat Good Morning America noted on Twitter made the 2019 awards the first time more than one black woman won in the same year. "That would not have happened without #OscarsSoWhite and Cheryl Boone Isaacs — facts," Lee said.

In the past three or so years since Reign launched #OscarsSoWhite, the Academy has made a major push to diversify its membership. Starting in 2016, under the leadership of the then Academy President Isaacs there has been an influx of new, diverse members. At the time, Isaacs revealed to Variety that a recent breakdown of the Academy came out as 94 percent white and 77 percent male. She set out on a mission to double the number of women and minority Academy members by 2020. "It's a big goal, but you have to set a big goal," Isaacs said of her mission during a talk at the Toronto International Film Festival in 2016, per Variety. In 2018, the Academy stated that they invited 928 new members to join the group, and said that it was the most diverse class yet, according to Vox.

It is undeniable that women of color at the Oscars have also been bolstered by the broadening of the Academy. Female directors of color dominated nearly every single category of "Best Films" besides Best Picture — with wins for Best Documentary Short (Period. End of Sentence.), Best Documentary (Free Solo), and Best Animated Short (Bao). Meanwhile, Spider-Man: Into the Spider-Verse took home an Oscar for Best Animated Film, making co-director Peter Ramsey the first African American man to win the award, as noted by HuffPost. And yet, no woman of color has ever been nominated by Best Director. Only one woman, Kathryn Bigelow, has ever won the coveted award, and no black man has ever won in that category.

With these historic 2019 Oscar wins behind us, it's important to remember that there are still many glass ceilings to be shattered when it comes to inclusion in Hollywood. The good news is, if this year's Academy Awards prove anything, we're on the right track.