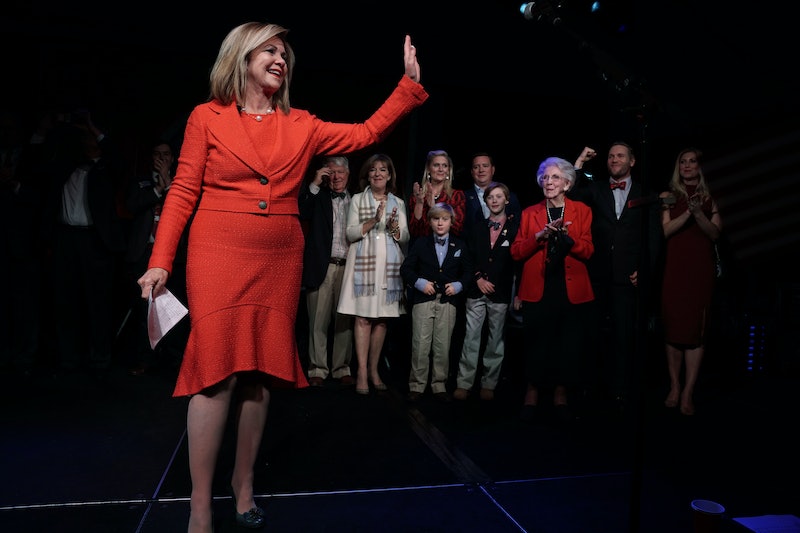 For the first time ever, Republican women will sit on the Senate Judiciary Committee, USA Today reported Wednesday. GOP leadership will place Sens. Joni Ernst and Marsha Blackburn on the powerful Senate panel in the new session, according to USA Today, marking the first time in over 200 years that a Republican woman has sat on the Judiciary Committee.

The committee's all-male membership on the GOP side drew scrutiny during the nomination hearings of Supreme Court Justice Brett Kavanaugh, who was accused of sexual assault shortly before his confirmation (Kavanaugh staunchly denied the allegations). When Dr. Christine Blasey Ford, Kavanaugh's accuser, testified in front of the Senate, GOP leadership —seemingly aware that an all-male group of Republicans questioning a woman's claims of sexual assault would be poor optics for the GOP — hired an outside female prosecutor to question Ford.

In November, Senate Majority Leader Mitch McConnell said that he wanted to have at least one Republican woman on the Judiciary Committee. However, he also said that he hadn't been able to find a woman in the Republican conference willing to sit on the committee, and that this had become "a frustration" to him. Democrats currently have four women on the committee.

McConnell's difficulty recruiting women for the Judiciary Committee was, in part, a result of the fact that there simply aren't many female Republican lawmakers. Although the midterm elections resulted in an historic number of women getting elected to Congress, this development unfolded almost entirely on the Democratic side: In the Senate, there are twice as many Democratic women as Republican women, and in the House of Representatives, the number of Republican women plummeted by nearly 50 percent after the midterms.

Although appointment of Ernst and Blackburn to the Senate Judiciary Committee will end men's monopoly on the committee's Republican seats, it's unlikely to endear progressives or women's rights groups, given both lawmakers' far-right policy positions.

Ernst authored a bill to strip Planned Parenthood of federal funds, and voted for "personhood" legislation in Iowa that would have defined life as beginning at conception. She believes that states can ignore federal laws that they don't agree with — a school of thought popularized by pro-slavery advocates during the 19th century — and has endorsed a conspiracy theory alleging that the United Nations plans to evict farmers from their own land and forcibly relocate them to cities.

Blackburn, for her part, also co-sponsored a bill to defund Planned Parenthood. She opposes equal pay laws for women, and voted against both the Lily Ledbetter Fair Pay Act and a bill to protect female employees who file pay discrepancy complaints from discrimination by their employers.

Writing at Rewire News, Jessica Mason Pieklo argued that GOP leadership placed Ernst and Blackburn on the committee because of their "hostility to abortion rights," not in response to the optics of the Kavanaugh hearing. It's worth noting that the two Republican women in the Senate who broadly support abortion rights, Sens. Lisa Murkowski and Susan Collins, were not given seats on the Judiciary Committee.

The chairman of the Senate Judiciary Committee will be Sen. Lindsey Graham, who was elected internally to the position after Sen. Charles Grassley, the previous chair, announced that he would step down. Grassley was criticized in November for suggesting that perhaps, Republican women hadn't joined the committee in the past because doing so requires "a lot of work," and "maybe they don't want to do it."