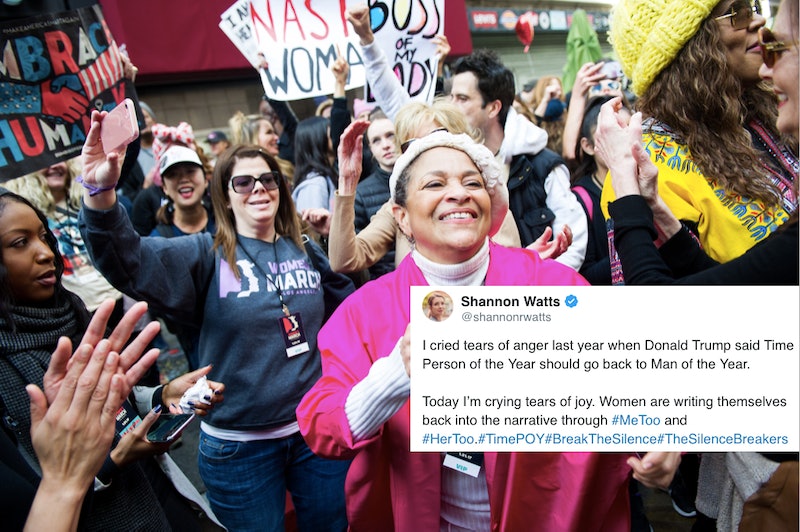 Considering 2017 has been a tumultuous year for America and the world at large, TIME's Person of the Year award provided the opportunity to reflect on everything that has happened. Would the honoree be an influential political leader, someone reshaping the business world, or a social movement challenging social norms? After TIME awarded "The Silence Breakers" on Wednesday morning, women on Twitter celebrated 2017's Person of the Year.

The shortlist of finalists, released Monday, consisted of mostly men, with Wonder Woman director Patty Jenkins and the #MeToo movement the only nods to women's impact on the world throughout the year. Male politicians such as President Donald Trump and North Korean leader Kim Jong Un were joined by Amazon CEO Jeff Bezos and former NFL player and activist Colin Kaepernick as contenders. Some women criticized TIME for not including more influential women, noting that women have simultaneously had an incredibly difficult year and made incredible strides toward combating sexual assault and harassment.

Former TIME editor-in-chief Nancy Gibbs explained last year that deciding who should be the Person of the Year comes down to "who had the greatest influence, for better or worse." After Donald Trump was chosen in 2016, Gibbs wrote:

So which is it this year: Better or worse? The challenge for Donald Trump is how profoundly the country disagrees about the answer.

This year, women overwhelmingly feel the person of the year's influence is for the better.

First, There Was Pure Joy

TIME's Person of the Year profile perfectly summed up how many women feel about the timing of the #MeToo movement, which initiated a flood of allegations against powerful men while addressing a gender problem that's always existed.

This reckoning appears to have sprung up overnight. But it has actually been simmering for years, decades, centuries.

Three women's bylines grace the top of the Person of the Year profile. And according to TIME correspondent Charlotte Alter, the entire project was executed by women.

TIME also credited activist Tarana Burke with starting the #MeToo movement years ago, and made a point to note that sexual harassment and assault plague every industry.

TIME's Choice Signaled That Silence Isn't The Only Option

The #MeToo movement had already made a name for itself around the globe, but being named Person of the Year validated "The Silence Breakers'" influence.

The choice sent a message to other survivors that there's power in speaking against abuse.

People also shared powerful moments from the Women's March, including this song about refusing to keep quiet.

It Reminded Women That They're Stronger Together, Too

"The Silence Breakers" wasn't a single person — it was an entire movement of people who spoke up about harassment and assault. Each person played a vital role in bringing the issue to the spotlight, but real impact was ultimately achieved because of the volume of voices demanding attention.

However, Some Didn't Approve Of The Runner Up

In TIME's explanation of the choice, the magazine detailed how many people now start their day by checking the president's Twitter feed.

Overall, though, women were thrilled to see "The Silence Breakers" continue to make waves. The Person of the Year honor sends the message that the #MeToo movement isn't going anywhere.