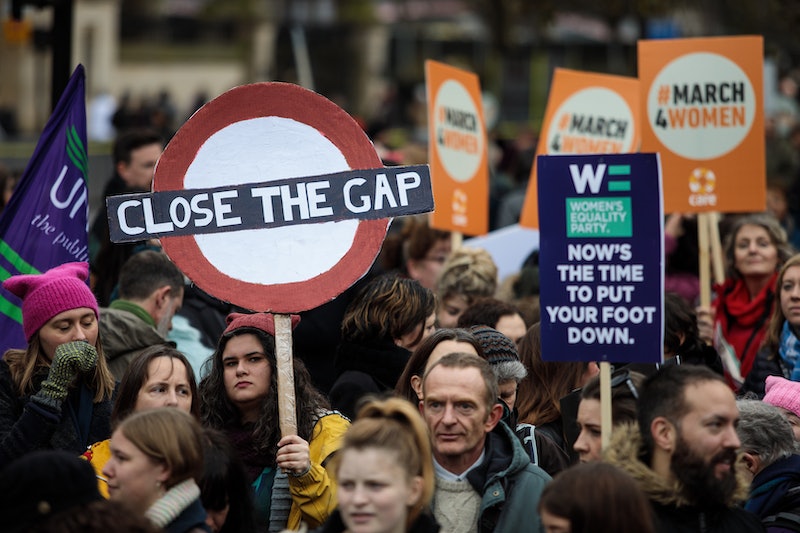 It turns out that states that have passed some of the nation's strictest abortion bans have something in common with each other besides political affiliation. According to ABC News on Wednesday, women's representation in the state legislatures that have pushed for these bans is remarkably low. And when you take a step back, the correlation is anything but shocking.

In Alabama, where a virtual ban on abortion was signed into law on Wednesday, not a single woman state senator supported the bill, HB 314. In fact, as it stands, the Heart of Dixie has only four women in its state Senate, according to the National Conference of State Legislatures. All in all, women make up only 15.7% of Alabama's total legislature. Furthermore, women's representation in states like Kentucky, Ohio, and Mississippi — which all have passed measures to ban abortion as early as six weeks into a pregnancy — is similarly low.

Representation on Capitol Hill isn't so different, either. In March, an Inter-Parliamentary Union study on gender equality ranked America at 78 out of 193 countries in terms of gender equality in Congress.

Advocates argue that representation in politics impacts policy-making. In comments to ABC News, the associate director of the Center for American Women and Politics at Rutgers University, Jean Sinzdak, explained how representation shaped policy issues, including topics like safe abortion access.

"Research has shown that women legislators bring different perspectives," Sinzdak told ABC News. "They bring their own life experience to bear on whatever the topic is, and they are more likely to bring marginalized voices into the policy conversation."

When it comes to abortion, Sinzdak said that the issue attracts a wide range of beliefs. "Abortion is an issue in which women on both sides of the aisle are particularly passionate, and they feel that they, as women, are best suited to speak to it because of its direct effect on women," she said. There wasn't a "monolithic" view on the issue, according to Sinzdak.

It's worth noting that the only state that seems to not follow the pattern of low women representation and restrictive abortion access is Georgia, ABC News noted. With women making up 72 out of 236 seats in its state legislature, female legislators represent 30.5% of both chambers in the Peach State. It's noticeably higher than places like Alabama, Kentucky, Ohio, and Mississippi.

If you're interested in learning where your state stands in terms of representation, check out Reflective Democracy Campaign's interactive study. Just put your state's name in the search bar and see how well it is — or isn't — doing.