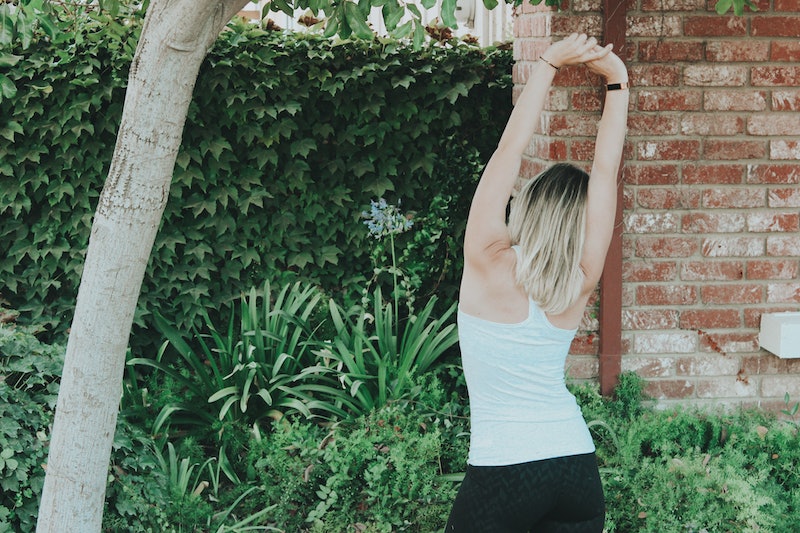 In Bustle's Braving BRCA column, writer Sara Altschule shares how her work out routine changed after she had a preventative double mastectomy.

For me, working out has always been my therapy. It’s been a way for me to release energy, achieve new goals and feel positive about myself and what my body can accomplish. When I found out I tested positive for the BRCA 2 gene mutation, which increased my risk of breast and ovarian cancer, and made the decision to undergo a preventative double mastectomy, working out was my safe space. I was able to channel my anger and anxiety leading up to my surgery into moving my body. At the end of a good run, I felt stronger than ever. For the last 10 years of my life, I’ve been someone who has been dedicated to working out regularly. But after my mastectomy, one of the hardest parts of recovery was not being able to get my exercise in.

I knew going into this surgery that I wouldn’t be able to exercise for six weeks afterward. And for me, six weeks felt like an eternity. But to be honest, after coming home from the hospital, I quickly learned that walking down the hallway felt like I was running a marathon. Most people didn’t fully grasp how weak I would feel after surgery — myself included. When the surgeons removed my breast tissue, it caused nerve damage, which is quite common with mastectomies and even breast reductions. This damage left me feeling very weak for a long time. Running two miles daily was a thing of the past. Heck, I couldn’t even push on a soap dispenser for the first couple of weeks post-op. So lifting weights seemed to be out of the question.

At week four, I was cleared to start walking for exercise — woohoo! At week six, walking then turned to a (very) slow run, which was more of a slow, funky-looking jog. At times, I had to laugh about it. It was hard for me to move my arms back and forth, so I’m sure my neighbors were wondering what happened to my running skills. But for every person that I passed by, I wanted to yell, “Look at me! I just had a double mastectomy and I’m running!”

For the first time ever, I started to appreciate my body for what it can do, rather than how my body looked. Before surgery (and even now), I put pressure on myself to look a certain way. I hate to admit it, but I would tend to focus on how I looked, rather than how strong I was, as a motivation for working out. But here I was after my double mastectomy, having to face certain realities. Where I used to obsess over how toned my arms looked, not being able to move my arms started to feel like a higher priority. It was the wake-up call I truly needed to reshape my relationship to exercise.

Slow and steady was the outlook I needed while recovering from a surgery like this. I learned how to be patient with what my body could achieve. Stretching and small movements helped a ton. A few days after my surgery I started doing arm stretches called wall walks. If doing small exercises on your own feels too hard, some people find that going to see a physical therapist helped them get back to their pre-op strength. After I was able to start running, I tested the waters when it came to lifting weights. I normally lift 10 pounds, but I started out lifting five pounds. After a month of lifting five pounds, I was ready for the big boys.

Now, eight months post-op, I feel totally back to normal when working out. I run on the treadmill about five days a week, lift weights, and even get some HIIT workouts in. Sure, there are certain moves that feel uncomfortable. At first, I tried to avoid any exercise where I would use my pectoral muscles, since they'd been stretched to make room for my implants. Because every time I felt that uncomfortable, nails-on-a-chalkboard type of feeling, I was reminded immediately of what I just went through — aka, major surgery. But slowly, I started to use those muscles and I tried to associate those uncomfortable feelings with how strong I am instead. I’m still not the best at pushups, not that I ever was. But I’m trying at the very least.

Having a double mastectomy has obviously taught me a lot about myself and my own body. I learned how to rebuild myself again. Going from the lowest of low, where I need help to go to the bathroom, to being stronger months after surgery — well, I’d say that’s quite a success. A year after finding out my diagnosis, I’m not only stronger mentally but also physically. Take that, BRCA mutation.