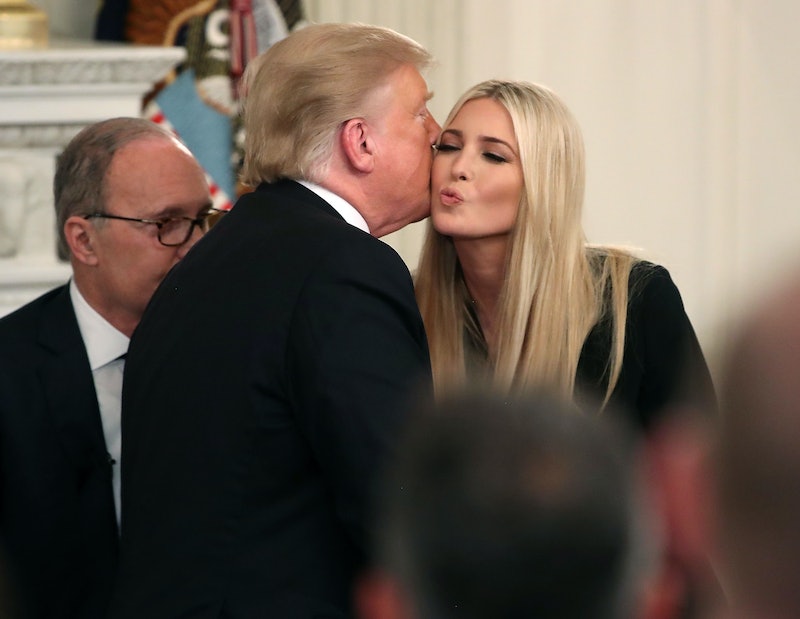 Top Democrats like House Minority Leader Nancy Pelosi and Senate Minority Leader Chuck Schumer have downplayed the Dems' plans to impeach President Trump — even after flipping the House in the midterms. But Republicans, nonetheless, are reportedly worried and have taken steps to defend the president. This would bring lots of uncertainties, but one thing's clear: some of Trump's kids could lose their jobs if he's impeached, convicted by the Senate, and then removed from office.

That scenario is not very likely, and is a long way off in any case. The first step, the one that Pelosi has played down, is for the House to vote to impeach the president. This has to be supported by a simple majority, and the Democrats will have that in the next Congress. This step is relatively straightforward and could happen.

From there, though, it becomes quite complicated. The process then moves to the Senate, where a trial is held. The senators act as the jury while the chief justice of the Supreme Court oversees the proceedings. Then, for the president to be removed, 67 senators have to vote to convict. That's two-thirds of the body, and a number that makes this outcome nearly impossible given the partisan atmosphere in Washington. Democrats will likely hold only 47 votes in the next Senate.

She has been living in Washington D.C., and working as an adviser to the president, along with her husband Jared Kushner. If Trump were removed from office, both of them would likely be out of these positions as the new president — Mike Pence — would choose his own advisers. Financially, nothing would change for the couple as neither are paid in their roles.

Ivanka would not be able to return to her previous position, running her fashion line. The first daughter closed the business in July. "After 17 months in Washington, I do not know when or if I will ever return to the business, but I do know that my focus for the foreseeable future will be the work I am doing here in Washington," Ivanka said at the time. She would, though, likely have the option to return to the family business.

Trump's two oldest sons, Donald Jr. and Eric would also see a change in their positions. Currently they oversee the trust that control's Trump's assets in The Trump Organization, which they then run. If Trump were removed from office, that trust would likely be dissolved and Trump would take over control of the family business. Both Donald Jr. and Eric would likely continue on as high level executives, though.

Donald Jr. could also lose his position as a surrogate for Republicans on the campaign trail if the impeachment, conviction, and removal from office hurt the president's standing with his base. Donald Jr. traveled the country far and wide during the campaign before the midterms, supporting Trump's favorite candidates, particularly those running for the House.

The other two Trump children, Tiffany and Barron, are both studying and don't have jobs to lose. Tiffany is studying law at Georgetown University and Barron is enrolled at St. Andrew's Episcopal School in Potomac, Maryland. If Trump were impeached, convicted, and removed from office, however, there's a good chance he and Melania Trump would move back to New York City, potentially affecting Barron's schooling.

None of this is very likely, as Republican control of the Senate means that conviction and removal from office are a particular long shot for the president.