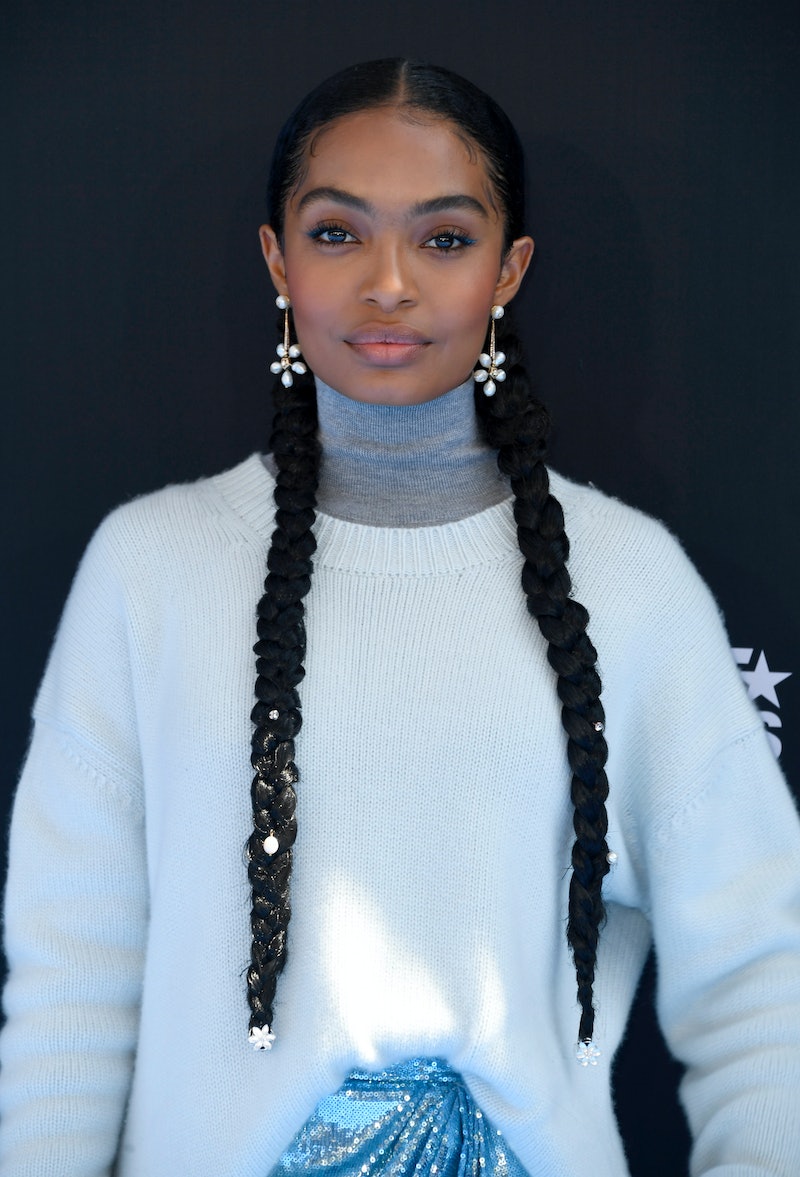 Yara Shahidi is grown-ish, and showing her young adult style at Black entertainment's biggest night. Yara Shahidi's 2019 BET Awards outfit is a straight-up stunner, but may be a little confusing in literal summer. Shahidi wore an actual turtleneck to the BET Awards, which take place in June. In Los Angeles. Where it's currently 80-degrees Fahrenheit.

The Black-ish and Grown-ish actor, who also starred in the film adaptation of The Sun Is Also A Star this year, showed up to the BET Awards looking like an actual shooting star. On the red carpet, Shahidi wore a lush light blue sweater with a gray turtleneck underneath. Yes, not one but two sweaters in 80-degree heat in June.

The sweater duo was paired with a tied sequin skirt in a similar blue hue. With a French tuck that would make Tan France proud in place, Shahidi accessorized the look with black-and-white snakeskin stiletto heels and silver flower drop earrings. Though the outfit may not be weather appropriate, it is a stellar vibe. Just take a look.

The blue theme of Shahidi's outfit may be a nod to late rapper Nipsey Hussle, who is being honored at this year's BET Awards. Hussle died as the victim gun violence in March, and was a strong community activist like Shahidi. Hussle was known for wearing blue, which is echoed in his song "Blue Laces 2."

The carpet at this year's BET Awards was even changed to blue in honor of Hussle, so chances are the coordination is more than coincidence.

For her makeup look, Shahidi went minimal, which is her go-to face beat for any occasion. With a simple blushed cheek and a nude lip, Shahidi left her eyes almost bare to let her bold brows take center stage. Her hair hung down in two sleek braids which were accessorized with flower charms and pearls. The simplicity of her beauty look is what Shahidi is known for — and she pulls it off without a hitch.

For the 2019 award show, Shahidi is not a nominated entertainer, rather a presenter for the Best New Artist Award. To present the award, Shahidi wore a brown silk pantsuit that was slightly '70s-inspired.

In 2017, Shahidi accepted the Young Stars Award at the BET Awards, using the moment to highlight the Black Lives Matter movement and the life of Tamir Rice, a 12-year-old boy killed by police in Ohio in November 2014. The award ceremony fell on what would have been Rice's fifteenth birthday, and Shahidi used her moment to honor him.

For that activist-oriented appearance, she wore another blue look — a distressed denim dress with a large ruffle cascading down the front.

While Shahidi was once a young star on the rise, she's now a superstar — especially on the red carpet. When it comes to stellar style — along with show-stopping talent and activist awareness to envy — look no further than Shahidi to serve it all.

Let's just hope the award show has some air conditioning and ice water to keep Shahidi cool during the ceremony...