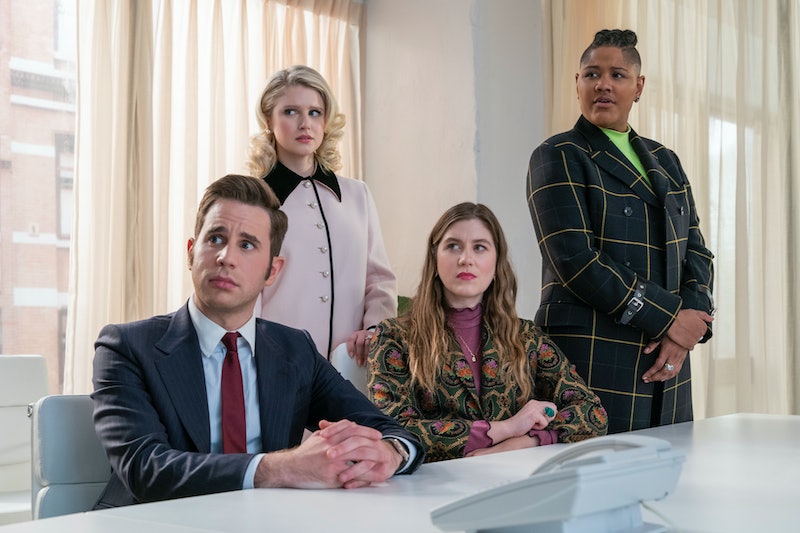 Spoilers ahead for The Politician Season 2. Following the tight race between Payton Hobart and Majority Leader Dede Standish for the New York State Senate, The Politician's sixth episode opens with a surprise reveal: the two candidates tied, so the winner must be decided by the flip of a coin. It feels like a hilariously archaic, made-for-TV plot twist, but the reality is that many elections have been won by a coin toss, or a straw draw, or playing cards. The Politician is a satirical look at American politics, and there are few things more ridiculous than the fact that we sometimes decide our elections by using children's games.

At the start of Episode 6, newscaster Pat Carney reveals that Dede pulled ahead of Payton in the final poll count, but an automatic recount was triggered because the difference was only 23 votes. After three recounts, they found that the two candidates were perfectly tied at 45,626 votes. So they're given a choice: redo the election in 10 days or flip a coin.

"We flip a coin?" Payton angrily asks while Dede proclaims she'll throw herself out the window. They're told there's historical precedence to this: in 2006 in Anchorage, the Democratic primary for the 37th House of Representatives was decided by a coin flip. In 2017, the candidate for the Virginia House of Delegates was chosen by randomly picking a film canister with a name in it. And in Indiana in 1891, the county treasurer was decided by a footrace. Hadassah amusingly suggests rock, paper, scissors instead, but all the above examples did happen in real life.

Leaving democracy up to a game of chance is one of the older and stranger traditions in American politics. According to The Atlantic, voting by lottery began in Ancient Athens, and the 12th Amendment was created after Aaron Burr and Thomas Jefferson tied 35 times in the 1800 election. A coin toss has never been used to decide a federal election, but it's pretty common at the local level. In Florida in 2014, for example, a Mount Dora City Council race was decided by randomly drawing a sealed envelope with a name in it, according to the Orlando Sentinel.

These ties do occasionally happen at the state level, as in Payton and Dede's case, though they're pretty rare. A 2001 analysis by the National Bureau of Economic Research found that only two state elections had tied between 1968 and 1989. Recently, a 2015 Mississippi state congressional race was decided by drawing straws, and in 2014, a New Mexico election for a judge was decided by a coin toss. According to a Washington Post analysis, 35 states decide ties by games of chance.

Coin tosses and name draws also occur during presidential primaries, when the candidates are fighting for delegates in each state. Per Vox, 13 Democratic caucuses were decided by coin toss in 2016, with seven going to Bernie Sanders and six to Hillary Clinton. It seems the trend is continuing this year as well, and while these coin tosses don't necessarily determine who gets the final party nomination (hopefully), they certainly play a role in how the system works.

As The Politician rightly points out, these traditions feel laughably arcane, and maybe even embarrassing in the year 2020. But the show ultimately illustrates an important point, which Payton mentions at the start of the episode: every vote really does matter. And in some cases, not voting at state and local levels may very well mean the person who represents you is left up to total chance.