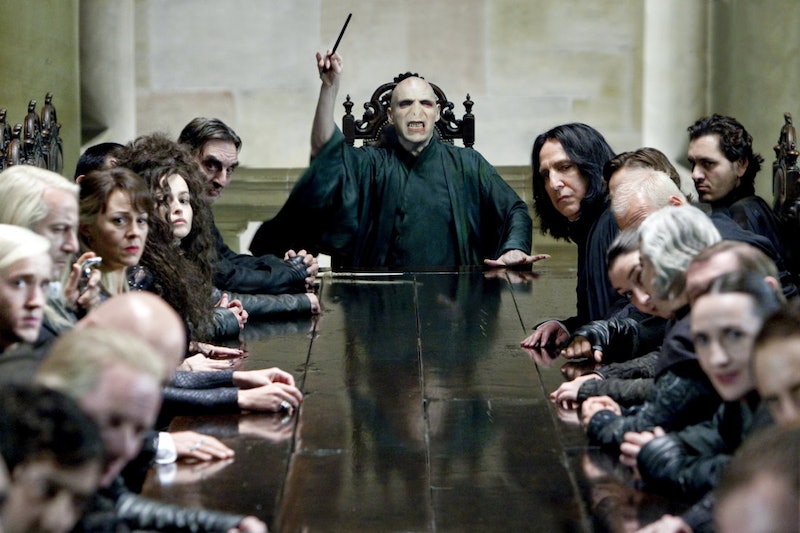 In many classic stories, the villains often prove more fascinating than the heroes. That's why there is an entire trilogy of prequel films devoted to the origin of Darth Vader, and why a play about the Wicked Witch of the West's background is one of the most successful Broadway musicals of all time. So it's no wonder there's now a film about the origin of Voldemort, but you won't be able to see it in theaters. That's because the movie, called Voldemort: Origins of the Heir, is not an officially-licensed production, but a fan-made film. And remarkably, Warner Bros. is OK with that.

The film was produced by Tryangle Films, which initially attempted to crowd fund the production on Kickstarter in 2016. However, Warner Bros. — which owns the film distribution rights to all things Harry Potter — had the project pulled from the site over alleged copyright infringement, according to NME. But surprisingly, the film studio reached an agreement in June of last year with the film's director, Gianmaria Pezzato, which allowed the film to proceed as long as those involved received no profit from their work. And now it's finally arrived, with the movie being posted for free to Tryangle Films' YouTube channel on Jan. 13, 2018. As of this writing, the 52-minute film has already racked up over five million views.

The movie begins with a disclaimer stating, "This film is a non-commercial fan film made by fans for fans and is not endorsed by, affiliated with, or associated with Warner Bros. or J.K. Rowling." As for the story itself, it's non-canon within the Potterverse, and was created by Pezzato and Stefano Prestia, the film's executive producer. It follows a new character, Grisha McLaggen, the heir to Gryffyndor, who investigates the murder of Hepzibah Smith. Book readers will remember that Smith was killed by Tom Riddle in order to gain access to the powerful artifacts she possessed, which he then used to create a horcrux on his way to becoming Voldemort. The film goes into much more detail on the murder and the circumstances surrounding it than Rowling's books do, and although the story isn't official, it may still satisfy fans who are eager to learn more about Voldemort. Here's the filmmakers' official statement on why they made the film, per the Tryangle Films website:

"What made Tom Riddle become Voldemort? What happened in those years, and what really went down at Hogwarts when he came back? There are some clues in the books which have not been transposed at all in the movies, but a lot goes unspoken. This is the story we want to tell: the rise of the Dark Lord before Harry Potter and his first demise."

The fan made film is currently filling a void by telling a story that the official Harry Potter prequel films may or may not tell. Warner Bros.' Fantastic Beasts film series, which will consist of five films and is being written by Rowling, will release its second installment later this year, Fantastic Beasts: The Crimes of Grindelwald. On the surface, the films are expected to tell the story of the conflict between Albus Dumbledore and the dark wizard Gellert Grindelwald, but rumors persist that they could end up telling the origin story of Voldemort as well, with some fans theorizing that the character of Credence Barebone may somehow be connected to Tom Riddle. However, there's currently no solid evidence that the Fantastic Beasts movies will involve Voldemort in any way.

It could be years before the Fantastic Beasts films end up telling the origin story of Voldemort, and that's if they even tackle the subject the subject at all. So for now, the best bet for fans hoping to learn more about Voldemort's background may be to watch the fan film Voldemort: Origins of the Heir — even if it's not the official story.