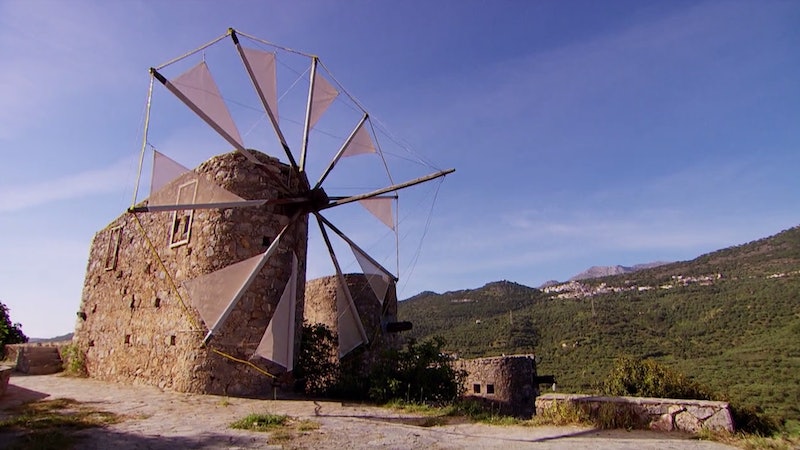 After weeks of build-up, Bachelor Nation knows who Hannah Brown got with in the windmill: none other than Pilot Pete. The location became instantly iconic after Hannah admitted that they "f*cked in a windmill" and that they even did it twice. Now, you can stay at The Bachelorette windmill in Greece and channel your inner Hannah Beast... or just enjoy whatever activities that are suitable for your own vacation agenda.

For any fans who were curious about how they could recreate that windmill magic, there's no need to wonder anymore. In a July 16 tweet, Airbnb confirmed the listing was where Hannah and Pete enjoyed their night in the fantasy suite. The windmill is located in Nikithianos, Greece. You can actually stay there for an incredibly reasonable price: $56 per night. Bachelorette fans need to jump on that deal ASAP. At such a great deal, it's going to book up quickly, or even increase in price.

Don't let the price fool you, it is a high-quality place to stay. The hosts are designated as Superhosts, which means that they received very high ratings from guests. Not only that, but the listing claims that "100% of recent guests" gave both the location and the check-in process a perfect rating. Did Hannah and Peter send in a review? Clearly, they had a great time there.

The listing describes it as a "Rustic Traditional Windmill," but they should really just rename it in honor of Hannah and Pete. The listing says that four guests can stay at the windmill, but there is only one bed and a sofa, both of which we say during the nighttime portion of Hannah and Peter's date. Iconic.

There is a bathroom, but not in the main area. Guests have to take the exterior steps to reach the bathroom, which is one floor below. There is also a kitchen for guests to cook their own meals.

However, there are some drawbacks. There is no air conditioning, so make travel plans accordingly. Maybe that's why the rate is so cheap right now. Who wants a summer vacation with no air conditioning? Don't go in the winter though. There's also no heating.

Nevertheless, fans of The Bachelorette will love to check out the site of the iconic fantasy suite location and document the visit on social media, of course. Unfortunately, guests might have to post those photos after the fact since wifi doesn't have wifi.

And forget about getting all meta and watching The Bachelorette during your trip. There is no TV at the windmill. Nevertheless, it's always a good thing to unplug every once and while. Plus, everyone wants to live it up in a windmill nowadays.

There are pictures in the listing, showing exactly what your own windmill experience will be like. There are lots of stairs and even a photo of the storage chest where Hannah and Pete "found" those condoms during the episode.

Not everyone wants to look for love on reality TV, but if anyone wants to feel like they're on The Bachelorette and make a trip out of it, it's now possible. Just reconsider recounting your windmill experiences to anyone who might be judgmental.