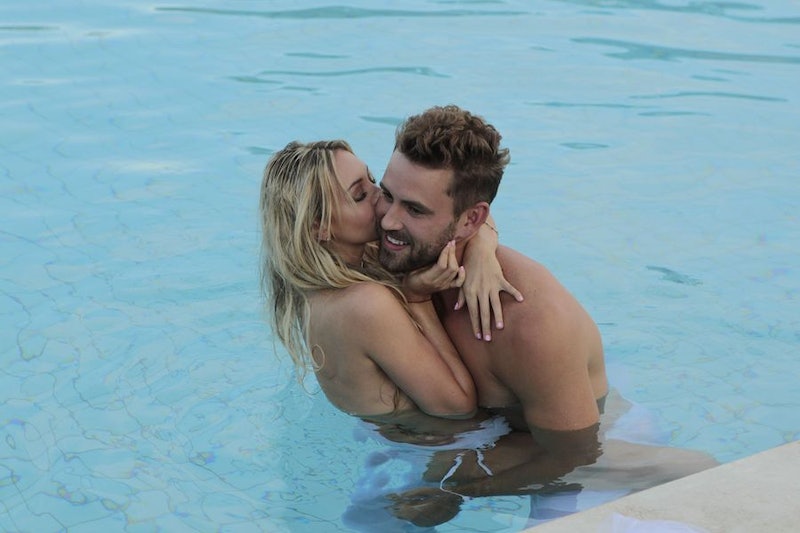 If a woman on The Bachelor is a tad more forward with her sexuality than the others, she is usually judged for it, and this season is no different. On a recent episode of Nick Viall’s season of The Bachelor, the other women criticized Corinne Olympios after she purposely lost her top on a group date. Yet while they may not have chosen to act like her, that's no excuse for them to slut-shame her — or for viewers to slut-shame Corinne’s actions on The Bachelor, either.

Corinne came into the season like a 24-year-old bat out of hell, ripe with potential, with a childhood nanny who still makes her snacks for her and a hunger to leave the competition with Nick by her side. She may not be easy to like, but she definitely knows what she wants, and that's pretty respectable. Corinne had the first kiss on the limo arrivals night, and she is a proponent of interrupting every other woman’s conversations with Nick just so she can get five more minutes of “I just really wanted to talk to you," showing that she's not afraid to go after whatever it is she desires.

It only took two episodes for her to really become persona non grata in the eyes of the other women in the house. On a group date in which Corinne and a handful of other women were to take wedding-themed photo shoots with Nick, Corinne, wearing a veil and a white bikini, shot her photos with Nick in a pool. It was here that things got a little steamy, and Corinne opted to “do a Janet Jackson," referencing that iconic Rolling Stone cover in which Jackson is topless, with someone's hands over her breasts. So, Corinne lost her bikini top and pressed Nick’s hands onto her chest (without his consent), and boy, did the other women on the show go wild. They said that they didn't know if that’s the “kind of girl” Nick should bring home, and posed the question of if Nick likes “a woman like that,” should they even be there at all?

The Bachelor and its contestants (not mention viewers at home) aren't always kind to women who are very forward with their sexuality, but that needs to stop. Corinne’s toplessness doesn't mean that she is not worthy of dating Nick, or of being taken home to meet his family, or of being treated with any less respect than the other contestants. Corinne is shaping up to be this season’s villain on The Bachelor, and her behavior may make her a lot of things — spoiled, childish, hilarious, whatever — but she's not a "slut" or “that kind of girl” or any other euphemism people want to use.

Corinne being sure of her sexuality does not give viewers and the women in the Bachelor mansion alike a reason to judge her, so let’s stop slut-shaming, OK?