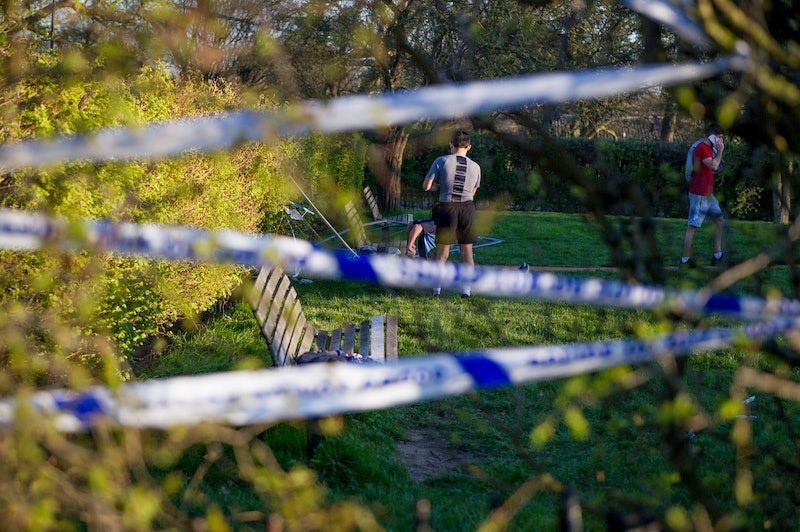 The nationwide lockdown has dramatically impacted the lives and freedoms of everyone in the UK and beyond. Although social distancing measures are in place to reduce the spread of coronavirus, the restrictions, which include not seeing family and friends outside of your household, are being broken by young people in particular. A new survey reveals that young men break social distancing rules way more than young women.

Researchers at The University of Sheffield and Ulster University interviewed 2,000 individuals between the ages of 13 and 24 and discovered "half of the men aged 19-24 had met friends or family members they did not live with during lockdown, compared to 25% of women," reports Quartz.

This research also found the "150 out of 281 men aged 19-24 had met with a group of friends during lockdown," per BBC News. A fifth have also been "reprimanded by police - either dispersed, fined or arrested as a result of breaking the rules." But why are young men more likely to break the rules?

"Older adolescent males were least compliant with current guidelines," reads the study, "...this group considered themselves at less personal risk of catching or transmitting COVID-19." Researchers point out they are not surprised by the findings citing that "males in general take more risks."

"They will take more risks and their decision-making processes are shaped by that, so their behaviour actually makes sense to them," Liat Levita from the University of Sheffield, one of the lead authors, said to the BBC.

External factors – including economic stability, race, living environment, parental influence, and mental health – were taken into consideration during the study.

As the BBC reports, "just under half of all those questioned - 917 young people - said they were feeling significantly more anxious during the lockdown, particularly if they had a parent who was a key worker. Levels of anxiety and depression were up to 10% higher among black and mixed race participants than white and Asian respondents, as per The Guardian.

Though that isn't to say that basic hygiene practices are a given. The study found "basic hygienic practices are not something that the respondents – both genders and all ages – were doing all the time." Researchers are calling on the UK government to do more to explain need for physical distancing.

More like this
This Is When Netflix Is Going To Start Charging You For Sharing Passwords
By Darshita Goyal
Pret & Costa’s Coffee Is The Strongest On The High Street, According To Which?
By Sam Ramsden
Rita Ora Finally Opened Up About Marrying Taika Waititi & Their "Perfect" Wedding
By Sophie McEvoy and Catharina Cheung
Gen Z Are Twice As Likely To Identify As Queer, According To New Data
By Sam Ramsden
Get The Very Best Of Bustle/UK
Sign up for Bustle UK's twice-weekly newsletter, featuring the latest must-watch TV, moving personal stories, and expert advice on the hottest viral buys.