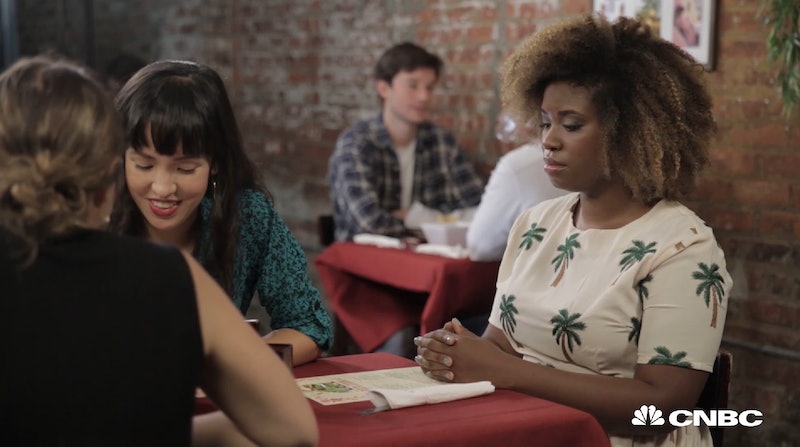 It’s been said many times before, but it's worth repeating: Money is a feminist issue. In fact, that’s exactly why Bustle has teamed up with CNBC Make It on Young Money, a web series aimed at helping millennials navigate tricky money moments. Starring comedian Akilah Hughes, Young Money addresses scenarios most of us have probably found ourselves in at one time or another — roommates cheaping out on you, wanting to hang out with your friends when a night out isn’t really in your budget, and so on — and shows how best to deal with them. It’s also a solid reminder that whatever you’re going through, you’re not alone — and honestly, knowing that so many others can relate to what you’re going through can go a long way toward making it easier to cope.

Take, for example, the subject of one of the first episodes in the series, "How To Split The Check With Friends". Going out with friends can be fun, but it can also be fraught — so much so that what’s meant to be a lighthearted evening can very quickly start to feel like you’re trapped in the middle of a horror movie. You start out with the best of intentions: You’re out not because you want to spend a lot of money, but because you love your friends. So, if you just stick to the more affordable parts of the menu and don’t order drinks or appetizers, you should be fine, right?

“HAHA, NOPE!”, says your bank balance, laughing cruelly at you. Meanwhile, your friends want margaritas — “Should we get a pitcher?”, they ask.

In that moment, this is you:

You try, though; while your friends order chips and guac, ceviche, and their pitcher, you get a salad and water with lemon. You tell yourself that if you’re still hungry afterwards, you’ve got stuff at home to munch on later. (Never underestimate the power of the mighty egg.)

But then, the moment of reckoning arrives: How are you going to deal with the check? The tension mounts… and then those dreaded words come out of everyone’s mouths:

“We can split it evenly.”

Even though you didn’t eat most of what was ordered in an effort to keep to your budget.

But you don’t want your friends to think you’re cheap, either, so… you stay silent and put down your credit card — a $90 charge you really can’t afford.

Yep. This is happening.

But I have good news! This whole nightmare scenario can actually be headed off at the pass before you even get to the restaurant. Here’s a better way to handle it:

But Young Money is about more than just individual moments. It’s about the way those moments fit into the larger structure of society, and the bigger issues that go along with it. Our culture teaches us from an early age that talking about money isn’t “polite.” This is problematic enough in and of itself; it promotes a lack of transparency about money, positioning it as the status quo, which can in turn become an issue in a huge number of arenas. Ever tried to, say, negotiate a salary offer that’s way too low when you’ve been taught all your life that you’re not “supposed” to talk about money? This weird cultural block we have about money is ultimately doing us all a disservice.

What’s more, the perpetuation of the idea that money talk is "impolite" can become even more of a problem for women and femmes. We’re socialized to be “pleasant” at all times and to continually put other people’s comfort above our own needs — which, in conjunction with this whole “Talking about money is rude!” thing — leads directly to situations like the one seen in this Young Money episode: We feel like we’re not allowed to bring up our cash flow problems directly because it might be awkward for everyone else… so instead, we go into debt in order to avoid rocking the boat.

And that? Is messed up.

But we can change it. It takes work, and it takes honesty, and it takes a willingness to spend some time with a lot of awkwardness. But this is how we do it — one moment at a time.