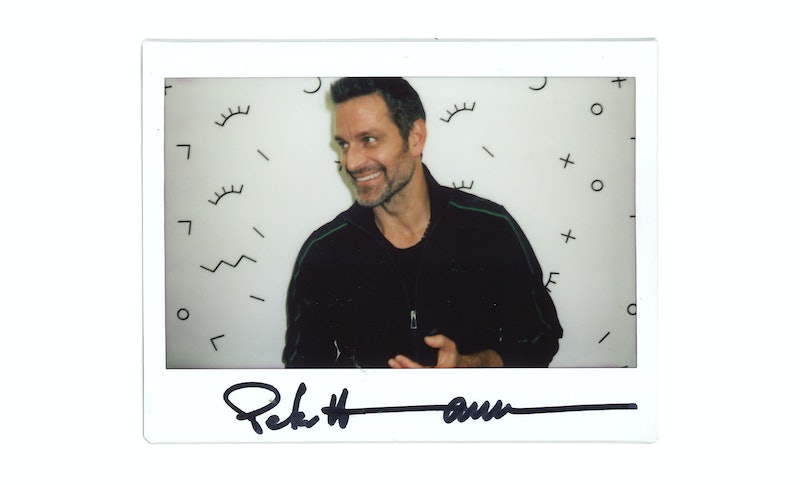 When celebrities hang out with Bustle editors, we want to give them the chance to leave their mark. Literally. So we hand them a pen, a piece of paper, a few questions, and ask them to get creative. The rest is up to them. This time, Younger star Peter Hermann is leaving his mark in the Bustle Booth.

"In the criminal justice system, there are certain workplace relationships that are especially complicated. These are their stories. And then would come the 'dun dun.'" This is how Sergeant Olivia Benson would react if she ever met Charles Brooks, CEO of Empirical Press. Or at least that's what she might say according to Peter Hermann, who plays Charles on TV Land's hit comedy Younger and who happens to be married to Olivia Benson herself, Mariska Hargitay.

Jokes aside, Charles definitely has had his fair share of inappropriate workplace relationships. Most notably, his love affair with Liza (Sutton Foster), which is getting a huge boost in Season 6. At the end of Season 5, Charles left his job at Empirical, in part so that he could continue seeing Liza. And while that may mean fans will have to live without seeing him in his signature three-piece suits (a classic Charles thirst trap uniform), it also will allow them to see a new side of his character.

"Not the entire party of who we are gets to dance at every moment of our lives," Hermann tells Bustle. "And so, with him, not every aspect of who he is actually gets to be so fully alive at work, and so we see him more fully alive. And that's fun to play. Hopefully, it's fun to watch."

Some fans would argue that anything that puts the 6' 5" Hermann on the screen is fun to watch. Needless to say, audiences have enjoyed watching him strut his stuff over the years. And yet, the actor still blushes when the seemingly insatiable thirst for Charles comes up.

"I'll say this: the fact that we... get to make a show that people delight in is just such an incredible place to be," he says of the thirst for Charles and the show. "Then, on a more personal level, the fact that I get to play a character who people take various forms of delight in, and to be told that someone is, in fact, 'thirsty' for, is just nothing but totally lovely."

Hermann might not be ready to admit just how thirsty he's made an entire fandom, but he is more than game to reveal his first TV crush — Marcia Brady — and to dish on the upcoming season of Younger in our Bustle Booth questionnaire.

More like this
'Grey's Anatomy's New Intern Got Advice From Dr. Bailey Herself
By Grace Wehniainen
On 'The Handmaid’s Tale,' Christine Ko Fights Back
By Gretchen Smail
Lauren Lyle Is Keeping The Contents Of Karen Pirie’s Bum Bag A Mystery
By El Hunt
A New 'And Just Like That' Table Read Pic Confirms A Key Character's Return
By Jack Irvin and Grace Wehniainen
Get Even More From Bustle — Sign Up For The Newsletter