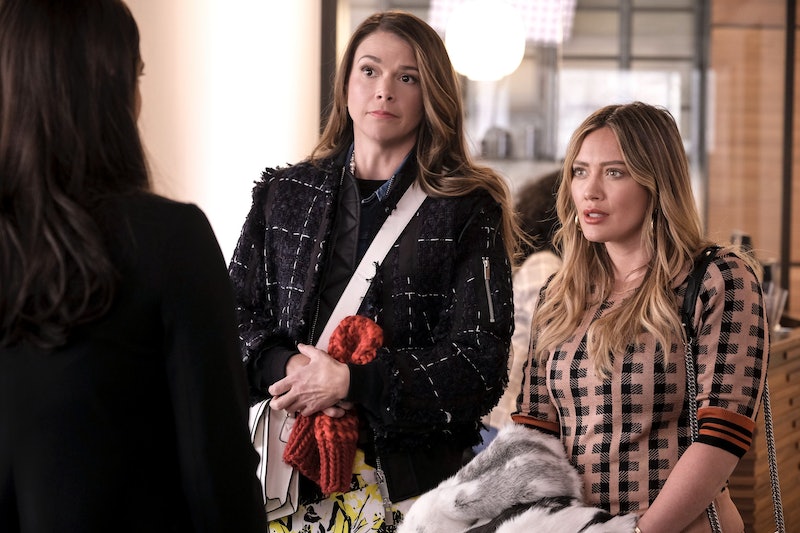 Younger tends to be pretty cutting edge and smart when it comes to its storylines, but hey — no one can be right all the time. Case in point? The July 10 episode, in which Liza narrowly misses exposing herself (again, ad nauseam) and her true age by telling people that she's "exploring" her age and then calling herself "age queer." It’s meant to be funny, probably, but here, Younger misses the mark. Younger’s use of queer language to make a point completely misses it, and worse, it makes the LGBTQ community look silly. Not great.

It all starts with Lauren and her new intern, Tam, who uses they, them, and their as their pronouns. When Lauren introduces Tam to Liza and Maggie at a party for a new makeup line that her PR firm is holding, her friends are confused by Tam and their pronouns.

Lauren, always eager to explain, says, “Tam is pansexual, homoromantic, and their pronouns are they, them, and their. Alright, no more questions — it’s offensive. The LGBTQIAPK community has been through enough.” Liza and Maggie continue through the party, looking for real food and trying to figure out if Don, Liza’s new love interest, is full of crap. Read: it is just a normal night at any new event in New York. It's is great to see a character like Tam on television, but is it as great when it seems like they're being mocked? Things only get worse from there.

Let's go back to Don for a minute. He’s a washed-up writer looking for a story, and when Liza drops her bag in front of him and she has two ideas, he finally finds one. A story about Empirical and their Millennial imprint is great, but a story about how it’s actually being run partly by a woman who is lying about her age in the first place? That’s even better. But it’s not until the Vanity Fair fact checker calls Liza and asks for her true age that Liza realizes that Don pulled a fast one on her. She and Kelsey are panicking, especially because they’re this close to signing a huge deal with Reese Witherspoon’s book club, and Reese, as her assistant says, is “in pieces” over the news. They want to know — is Liza really 41?

It’s then that Liza thinks fast on her feet and announces herself as “age queer.” “That fact checker was trying to age-shame us for being young, so I told them I’m old. In protest,” she says. “And it’s like, who cares? I don’t identify as any age. They were so focused on how successful we were for our age, and it shouldn’t matter how old we are. So, I told them I’m 41, and let them think that for all I care. We’re post-age,” Liza adds.

Kelsey throws in something about the patriarchy, and this line of absolute hullaballoo confuses Reese’s people enough to keep everything in motion. The ensuing social media fallout also manages to kill Don’s article, so it’s a win-win for Liza.

Younger’s whole thesis on age not being more than just a number is true, and when it underlines that women can be successful no matter who they are or how old they are or what they look like, it works. But it doesn’t quite work here. Younger has a habit of poking fun at trends deemed millennial (or "younger") in nature, but this one falls flat.

Actually, Liza using a whole community’s resistance against the patriarchal politics of defining oneself is pretty gross. Liza made a choice to lie about her age post-divorce in order to get a job and reclaim her life. A person's gender and sexual orientation are not choices. While ageism is very real and wrong, the struggles of a middle aged white woman trying to find a job in the New York City publishing world pale in comparison to the discrimination that the LGBTQ community faces. Especially for those who identify as genderqueer, gender fluid, non-binary, and transgender.

Turning the LGBTQ community into a punchline in this way is a surprising move for Younger, considering that Nico Tortorella, who plays Josh on the show, identifies as gender-fluid. In 2018, Tortorella told Them, “I just pretty recently have come to terms with the fact that maybe I am not fully cisgender. This isn’t something I’ve actually talked about on a public level quite yet.” The character of Lauren is sexually fluid, something that actress Molly Bernard relishes. In an interview with The Hollywood Reporter in 2017, Bernard said, “People in their 20s now have a greater sense of sexual freedom and have grown up with a lot more openness in terms of how they see the world, and they perceive gender and sexuality. Lauren and Younger reflect the world."

This is hard to reconcile. In one breath, Younger is a champion of characters who are unabashedly themselves — have you ever seen a person like Lauren on television before? But in the next breath, the show seems to be mocking being queer as just another dismissible, capricious, millennial trend, used as a punch line to keep Liza safe from reveal. Then again, Younger has held Liza accountable before, and it's definitely possible that someone will call her out on this or that her carelessness with LGBTQ language comes back to haunt her in some way later in the season. This show is full of twists and turns.

One thing is clear, though: Queerness isn’t a trend, it’s a human being's identity and in the current socio-political climate, Younger missed an opportunity to handle the subject matter in a much more respectful way this time around. There's always time to make up for it.

More like this
Johnny Sibilly Makes “Gay Shit”
By Hugh McIntyre
Here’s Who Victor Chooses In The ‘Love, Victor’ Season 3 Finale
By Brad Witter
The ‘Love, Victor’ Showrunner Gave Fans Hope For A Possible Spinoff
By Brad Witter
'Mean Girls' ​​Daniel Franzese Spoke Candidly About Conversion Therapy
By Rachel Mantock
Get Even More From Bustle — Sign Up For The Newsletter