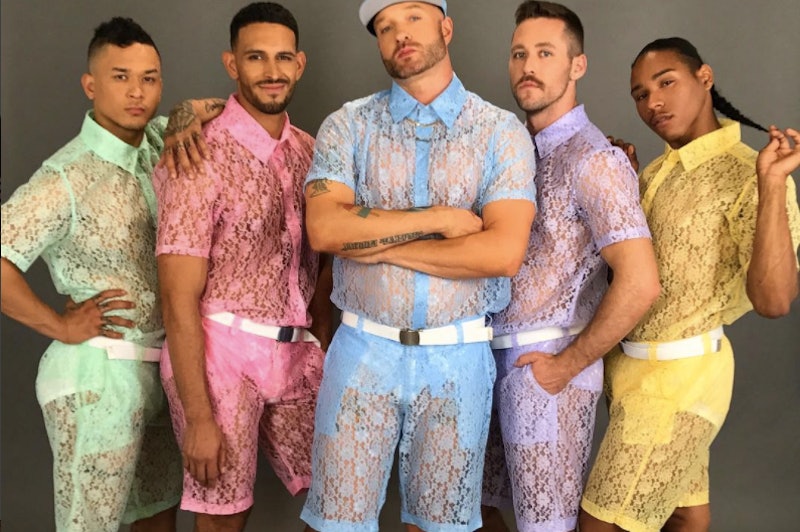 My favorite thing about the beginning of summer in New York City is men looking fresh, stepping out in their summertime finest. There's nothing quite like that first blast of warm June air and the blessed visual of men waiting for Ubers on Hell's Kitchen corners — slim cut floral shorts, tote bags, and mirrored sunglasses in tow. For me, the sight conjures yearnings for summer rooftop parties with boozy cocktails we'll all have too many of, and celebrates the beauty of male legs in hemlines that would scandalize their forefathers.

You know what it doesn't make me think, though? "Wow, I guess men's floral/lace/pink/whatever shorts are a thing now."

It's an unpopular reaction — or lack thereof. After all, the idea of a male version of women's clothing being "a thing" is pretty popular on the internet these days. All hell broke loose when we learned about the RompHim, a Kickstarter campaign that created a male-specific alternative to the popular garment for a market saturated with rompers for women.

The response to the RompHim was varied. Writer Jared Michael Lowe penned an excellent piece for Teen Vogue about how clothing and black masculinity are intertwined that's worth the read. Of course, for every thoughtful essay on gender and choice, there are approximately 30,000 homophobic and sexist tweets about RompHims swirling in the ether, too — those definitely aren't worth the read.

I have my own feelings about the RompHim, but those feelings are pretty irrelevant — I'm a straight woman, and I don't know what it's like to have my choice to present femininity through clothing scrutinized. It's not "a thing" for me — it's what's expected. I don't get to have a say, in any official sense, about what it means for the culture at large.

I will offer this, though: I think men should be allowed to wear whatever they want, for whatever reasons they want. Also, you look cute in that romper, boy.

For me, the latter sentiment also applies to the latest men's fashion item that's causing people to clutch their pearls: The men's lace short. "Lace shorts for men are the new RompHim and honestly we're kind of here for them," reads one headline. "If You Thought Male Rompers Were Absurd, Check Out These Lace Shorts For Men," reads another. Twitter is, of course, buzzing: A quick search for "lace shorts for men" shows that social media is predictably waffling between confusion and horror and "yass queens," and far more than one person has pondered, so I guess lace rompers are a thing now?

While reading these headlines and tweets and reactions, the same thought kept flashing through my mind: Why are we going out of our way to react to the fact that men's lace shorts are "a thing," when, in reality, women's lace shorts aren't a thing? The shorts in question are completely see through, pastel lace — I'm a women's fashion editor, and I've not seen anything similar for women, save for on a boardwalk or a dark corner of a dusty department store. Not on the runways, not on social media, not on my colleagues, not on bloggers, or anywhere else. But suddenly, "lace shorts for men" is something we should be paying attention to, simply because they are, as stated, for men.

All of this begs a question: What are we really reacting to here? If I had to guess, it's more nuanced than how we feel about male versions of trends "for" women, like the RompHim. It's not delight or concern at the fact that men are co-opting a trend typically worn by women — it's discomfort and slack-jawed wonder that the details of the clothing are bright and lacy and stereotypically feminine AF, and being worn by men.

And that, well, I do have an opinion on. The RompHim was a play off a women's fashion trend, sure, fine, whatever — but the reaction so far to men's lace shorts is a reminder that no matter what men put on their bodies (even something that's not popular with women) — if the details are feminine, frilly, girly, or all of the above, it becomes "a thing."

For me, it says a lot about our comfort level with actual gender fluidity in fashion. No one reacts to the sight of women in menswear and neutrals, for example — but put a boy in a pink floral skirt, and you might have chaos on your hands. The industry might be blurring gender lines more frequently, but until we shrug our shoulders at the site of a magnificent man thriving in a neon orange floral lace short, how far could we have actually come?

Whatever the answer may be, stay wearing those shorts and those rompers and suits and skirts and pastels and florals and whatever you want to, boy. I'm here for it, and you.