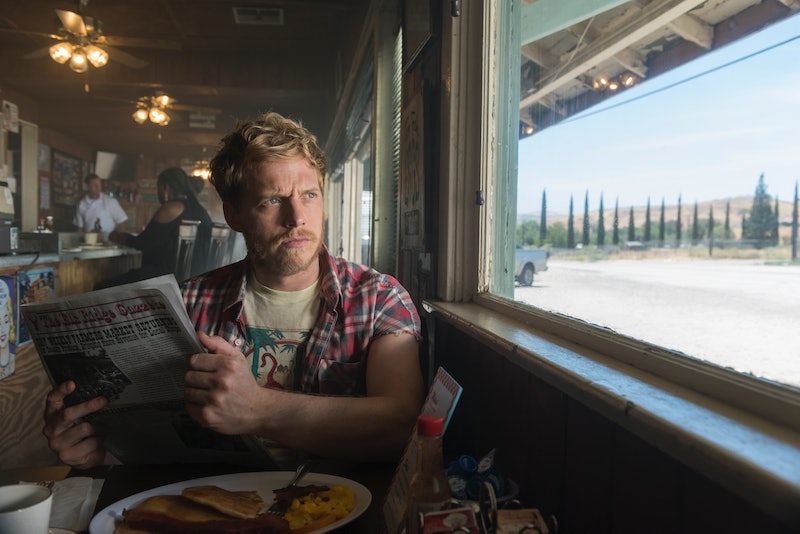 Things are going to get much, much worse before they get any better on You're The Worst. FX's critical darling dark dramedy ended last season on what first seemed like an out-of-character happy ending — Jimmy (Chris Geere) proposed to Gretchen (Aya Cash), and she said yes. Happy tears were shed, kisses were shared. But of course, the happy moment didn't last. How could it, on a show with characters who are literally called "the worst?" This isn't your classic rom-com, people. Gretchen broke down in relief, telling Jimmy that it's OK that he lost his father because now they would be a family. And Jimmy promptly freaked out about that particular "F word," leaving her on a mountain and driving away by himself with no explanation.

Out of all the terrible things that Jimmy has done over the course of three seasons, this might be the absolute worst. And the actor who plays the British author with commitment issues totally agrees. Speaking to the room full of journalists gathered at the Beverly Hilton on Wednesday morning for the 2017 Summer TCA press tour, Geere had no sympathy for the absolute dumpster fire of consequences Jimmy has to face when Season 4 picks up.

"You realize about Jimmy, he's always been bad," Geere says. "But he's never going to be good unless he's with Gretchen. This season is him out of his comfort zone in many ways."

As viewers will soon find out when Season 4 kicks off with a special one-hour premiere (airing Wednesday, Sept. 6 at 10 p.m. on FX), Jimmy abandoned more than just Gretchen the night of that game-changing proposal.

"Jimmy just never came home that night," You're the Worst creator and executive producer Stephen Falk says. "He turned off his phone and just drove until he found find somewhere to hide because he's a giant p*ssy."

So no, there won't be any wedding bells ringing on You're the Worst ... at least, not anytime soon for Gretchen and Jimmy, who will spend Season 4 broken up and seeing other people. Falk didn't "relish" keeping them apart, especially since it also kept Lindsay (Kether Donohue) and Edgar (Desmin Borges) separate in the overall arc of the season. He revealed that they "pretty quickly get back together" in terms of sharing the same storyline, but not in terms of their relationship. However, splitting up Gretchen and Jimmy allowed both Lindsay and Edgar to grow in some surprising ways this season, and Falk explained that that's because they were each ripped away from the other halves of their co-dependent relationships.

"I'm glad you're bored because that means you're being an adult," Falk adds with his own laugh.

But there is more than just a punchline when it comes to Gretchen acting "zany" — her clinical depression explored in groundbreaking new ways over the past two seasons is swinging into the other extreme in Season 4.

"Obviously that's not something that goes away," Cash says of how much the show will deal with Gretchen's depression this season. "Now that we know that's something she's dealing with you can see the ripples of that in almost everything she's doing. This season she's in more of a manic state than a depressive state in response to the breakup. And Jimmy has not yet figured out how to deal with that in response to his actions."

Ending the teaser-filled panel, Falk announced two new casting additions for Season 4: Girls alum Zosia Mamet for episode 7 and Hollywood icon Lou Diamond Phillips. Apparently Cash was the one who got Mamet to sign on to You're the Worst, and she's playing Heidi, "Gretchen's estranged best friend from childhood with whom she reconnects while back in her hometown, visiting her family."

As for Phillips, he will appear as himself, in the role of a man who dated Lindsay and Becca's (Janet Varney) mother in the '90s and was a father-figure to them. Lindsay and Becca track him down in an attempt to find out why he abandoned their family in episode 10.

Well that's just perfect, because honestly, who doesn't have some kind of weird relationship on You're the Worst?!