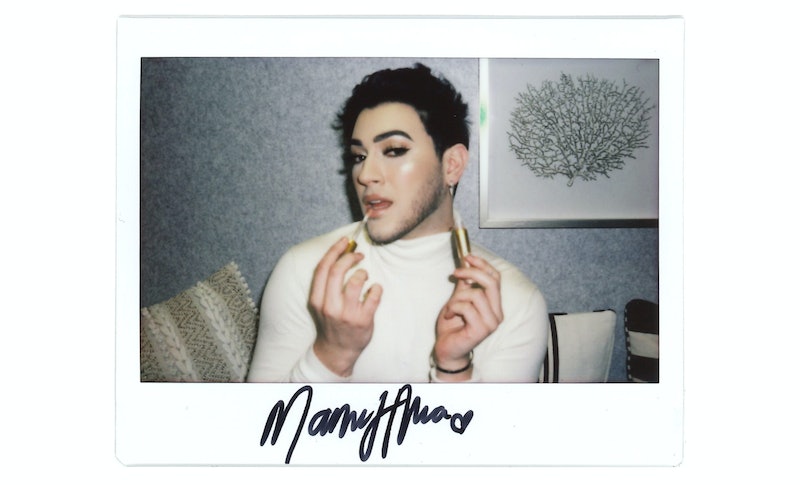 When celebrities hang out with Bustle writers, we want to give them the chance to leave their mark. Literally. So we hand them a pen, a piece of paper, a few questions, and ask them to get creative. This time, beauty influencer Manny MUA is leaving his mark in the Bustle Booth.

Naturally the first thing I notice about Manny Gutierrez, known to the beauty community as Manny MUA, is his makeup. Painted with enviable precision, Gutierrez’s beauty look demands my attention, even if I’m trying not to stare.

His gleaming eyeshadow, which he later tells me, is a combination of Stila’s Shimmer & Glow Liquid Eyeshadow in Starlight and the shade Beat from Gutierrez’s Life’s A Drag Eyeshadow Palette, is enough to inspire me to buy both products and fumble to recreate the look. His face beat will haunt me the next time I try to carve out my own cheekbones or get my foundation to lay with airbrushed grace. Gutierrez is a professional when it comes to powders and pigments — and it shows.

But the next thing I notice about Gutierrez is that he is familiar. After years of watching him on YouTube, it’s like he just hopped out of my computer screen and into my reality. His personality is the same infectious and bubbly persona that Gutierrez is known for in his videos. His cheeky giggle echoes the exact laugh that starts each of his YouTube videos. His affinity for cursing, a known Manny MUA trait, adds a rawness to our conversation. He has an authenticity that can’t be faked, a somewhat rare quality in someone with celebrity status.

“Every time I do my makeup, I remember watching my mom do her makeup,” he tells me of his early inspiration. “When I was younger, I would watch her before she went to work. I would just come into the room at eight years and watch her sit at her vanity and do her makeup. It was such a fun thing watching her go from waking up to full glam. I feel like her energy would change. She would present herself in the way she wanted to be. There was a powerfulness to it.”

That transformation is what drew Gutierrez to beauty, as part of what he calls a “men in makeup” movement. As a makeup artist and beauty influencer, Gutierrez uses his work to push against the misconception that makeup is a mask to hide insecurities. Pulling from his background of watching his mother as a child, he hopes to help shift the beauty narrative to one of creativity and self-expression.

“I think a lot of people think the reason they need to wear makeup is to cover up their imperfections, but that’s not what makeup is about for me and a lot of the makeup community,” he says. “It’s about being able to have a creative outlet on yourself, and being able to have fun with it and run with it. It’s about embracing who you are on the inside and trying to put that on the outside.”

I’m a man. I enjoy being a man. But I also enjoy playing with makeup, too.

For Gutierrez personally, makeup has helped him learn more about himself. With strong roots in the LGBTQ community, “men in makeup” have often been associated with drag culture and gender experimentation. While that history helped Gutierrez, who is gay, find makeup, it isn’t necessarily his narrative when it comes to what makeup means to him.

“Makeup helped me learn more about how to express myself in a different, creative way. I feel like that made me more confident to present myself. And not just one part of myself, but all parts of myself,” Gutierrez says. “If I was straight, I wouldn’t be as interested in makeup because growing up in a religious household, that wouldn’t have been something in my path. I feel like [my sexuality and makeup] went hand in hand for me. They both found one another and combined to help me figure out who I wanted to be. I wanted people to think men in makeup could be its own thing — and not just drag. I don’t do drag. I wanted it to be, ‘I’m a man. I enjoy being a man. But I also enjoy playing with makeup, too.’”

But being in the public eye as a beauty influencer hasn’t always been easy, especially in the past year. Gutierrez has weathered very public scrutiny, involving lost subscribers, apology videos, and time away to reflect. Almost a year later, Gutierrez is determined to come out on top, both personally and professionally.

With his makeup brand, Lunar Beauty, launching in Sephora this month and a community of almost five million subscribers on YouTube, he's certainly achieving professional success while keeping his personal life in check.

“You really can’t grow without having these harder experiences. Looking back, it’s like things were meant to happen the way that they did because I wouldn’t be able to be the person I am today,” Gutierrez tells me. “I feel like I’m someone now who is even more present in real life. Because I wasn’t, and that sounds kind of odd. But now, I have a much better grasp on what’s important. My family is important to me. Helping others is really, really important to me. I feel like without everything happening, I wouldn’t be able to be as aware of myself and now I feel like I’m much more aware.”

By the end of our talk, Gutierrez seems more like a new friend than one of the biggest beauty YouTubers on the planet. After taking Polaroid pictures to accompany his Bustle Booth, the photographer lays out the fresh photos on a table. We all stand around, waiting for the gray film to develop the image.

“It takes a little while for the pictures to become pigmented,” the photographer, who isn’t familiar with Gutierrez’s work, explains.

I immediately glance over to see Gutierrez’s reaction to the photographer unknowingly referencing his iconic catchphrase. He’s already looking at me with a knowing smile on this face.

“So pigmented,” I whisper to him. We laugh like old friends who have known each other much longer than the 15 minutes we’ve spent together.

More like this
This Week’s New Makeup Releases & More Beauty Headlines
By Audrey Noble
Jelly Nails Are Officially Trendy Again
By Kali Borovic and Audrey Noble
How To Get Wednesday's "Soft Goth" Lip, Straight From The Makeup Designer
By Audrey Noble
Jenna Ortega's Hair Routine Occasionally Involves Washing Out Fake Blood
By Olivia Rose Ferreiro
Get Even More From Bustle — Sign Up For The Newsletter