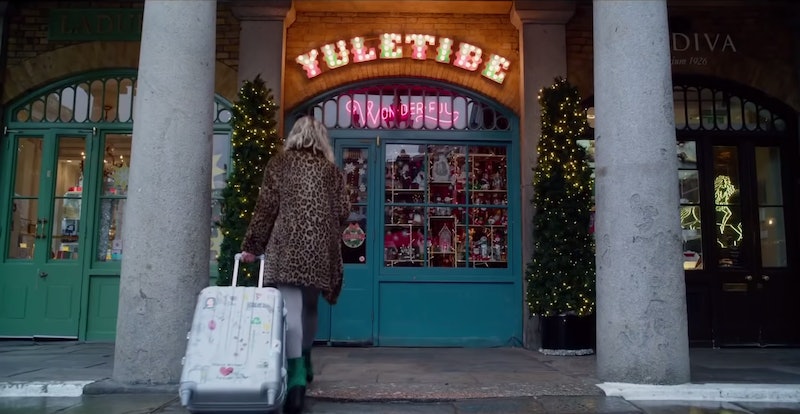 For those who adore the Christmas holiday, the idea of working in a store that sells and celebrates Christmas all year round might be a wonderful, magical idea. Not so for the protagonist of Last Christmas, Kate (Emilia Clarke), who is already sick of working at Yuletide Wonderful, a shop which does exactly that. But while Yuletide Wonderful doesn't exist in real life, its location is known for really doubling down on the holiday season every single year.

In the film, out Nov. 8, Yuletide Wonderful is in London's Covent Garden, a popular shopping destination that turns into one of the city's largest Christmas markets during the holidays. It's against that tourist-filled, festive backdrop that Kate has her meet-cute with Tom (Henry Golding). Despite their meeting being marred by bird poop, they make an impression on each other and go on to meet up again throughout the city, eventually falling in love, as you'd expect in a rom-com like this.

But Last Christmas isn't just a story about the love between Kate and Tom, it's about the city of London itself. Chatting with Entertainment Weekly, director Paul Feig said, "I was hell-bent on [shooting] in London before Christmas so we could use all the lights and the decorations that were naturally here. I finally get to make the love letter to London I’ve always wanted to make." He went on to talk about Covent Garden, saying, "It’s an over-the-top place with more Christmas than you would ever see in one building, but it’s absolutely lovely and classy. But it’s overload, especially if you’re like Emilia’s character in the movie and not entirely in the Christmas spirit."

On the opposite end of the holiday spirit spectrum is Kate's boss and Yuletide Wonderful owner Santa (Michelle Yeoh), who has an abundance of Christmas spirit, as Yeoh explained to Forbes. "Christmas is about something for everyone," she said. "So, in her store, no matter what your taste is, there’s something for you. That was what made her so different and special. She has a heart. She knows that when customers come to her store, they’re going to walk out with something that means something to them."

That spirit also comes from real life, as Yeoh herself is similarly into the season. "When I first saw the shop, my jaw dropped because I love Christmas, personally," she went on to say. "I love going to Christmas stores and finding that special ornament I want to hang on my tree. It was very magical."

People trying to find that magic year-round may be hard pressed, as year-round Christmas stores do exist, but they're not widespread. There are six notable ones in the U.S., according to Bond Street's "America's Top Year-Round Christmas Stores" list — technically there's seven entries on the list, but one of them is a non-profit museum dedicated to nutcrackers, so it's not a store, strictly speaking. People goes a little farther, listing six year-round Christmas towns located in America.

Across the pond, London's only year-round Christmas store closed just a few years ago in 2015. Appropriately named The Christmas Shop, it opened in 1988, according to the shop's website, and was described as "an Aladdin's cave bursting at the seams" by tourist guide site Londontown. Similarly, London's Christmas markets, which stem from the traditional German Weihnachtsmarkt street market, are a popular tourist attraction, only they're not open year-round, popping up seasonally around the holidays.

Fortunately, going to the movies this weekend may give your life the red-and-green makeover you're looking for. Last Christmas is as obsessed with the holiday as Santa's unfortunately fictional store.