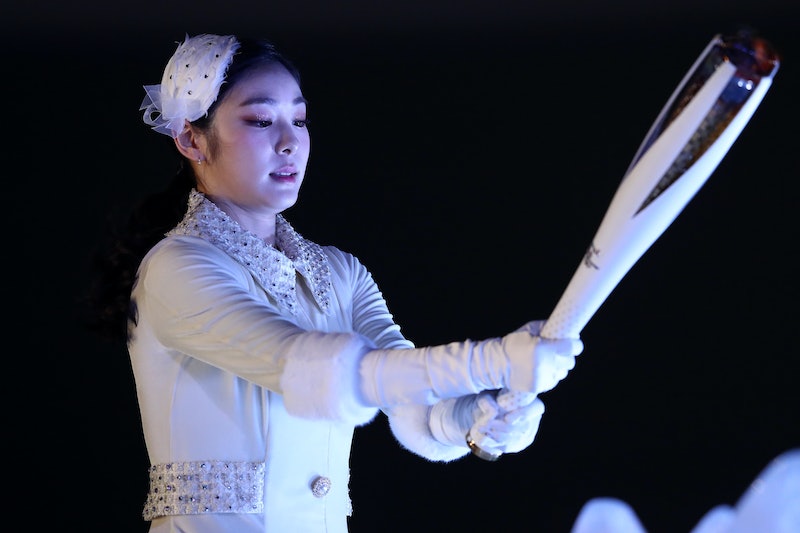 It doesn't matter that South Korean figure skating star Yuna Kim isn't competing at the 2018 Winter Olympics — at Friday's opening ceremony, she stole the show anyway. "Queen Yuna," as she's lovingly referred to by her fans, was chosen for the honor of lighting the Olympic cauldron. The now-retired gold medalist serves as an official ambassador for the 2018 PyeongChang Games. The appearance prompted a lot of people to wonder about Kim — how did she become such a big star and one of the highest-paid female athletes in the world? Here's Yuna Kim's net worth and everything else you need to know about the "queen."

According to Forbes, Kim is the seventh highest paid female athlete in the world. She earns roughly $9 million a year. The site The Richest estimates Kim's net worth at around $21 million. A lot of her income stems from endorsements. Kim has been the face of many brands, including Nike, Korean Air, Kookmin Bank, and Hyundai. She was also recently a model for the jewelry brand J. Estina.

Kim became the first South Korean athlete to ever win a medal in figure skating at the 2010 Winter Olympics in Vancouver, Canada. In 2014, she took home the silver at the games in Sochi, Russia.

Kim has garnered fame outside of just figure skating, too. She recorded a duet with K-Pop singer Lee Seung-gi, as well as the group Big Bang.

She's obviously a beloved figure in South Korea, judging by the overwhelming response to her cameo at the 2018 Winter Games. Kim appeared in skates and a white figure skating outfit and glided over to light the Olympic torch.

Forbes ranks the 27-year-old in the top 10 celebrities in Korea and Time magazine named her as one of 2010's 100 most influential people in the world.

She made headlines for her gold win in Vancouver, as well as for racking up 228.56 points, the highest point total that anyone had ever received since the ISU started using this judging system in 2004. All of this success translated to millions of dollars in sponsorship deals for Kim.

Four years after the Winter Games in Vancouver, the figure skater made headlines again for winning her silver medal in Sochi — but this time for controversy surrounding her score. Many people believed she should've taken home the gold that year. Instead, Russia's Adelina Sotnikova won the gold medal. Sotnikova was cleared in the Russia doping investigation, but won't be competing in 2018 due to an injury.

Kim isn't just adored by fans of figure skating, but by her peers as well. In Time in 2010, former U.S. Olympic skater Michelle Kwan praised Kim's skills, saying that her "inspiring performances in Vancouver changed the face of figure skating forever." She added, "Those six-and-a-half minutes on the ice left not only a mark in the record book but also an indelible impression on millions of young girls around the world.”

Kwan also tweeted her support of Kim during the opening ceremony on Friday, and shared a photo of the two skating together at the Special Olympics in 2013.

The athlete puts the millions she makes through contracts to good use by giving back. In 2010, she was appointed a UNICEF Goodwill Ambassador. She's participated in relief efforts in Haiti, Japan, and the Philippines. Kim also donated her silver prize money from the 2011 World Figure Skating Championships, $27,000, to victims of the Japanese earthquake.

Considering Kim's diverse and devoted fan base, it's safe to assume the former Olympian won't be leaving the spotlight any time soon. You can be sure to see her on and off the ice, and even in the pages of Vogue, for a long time to come.