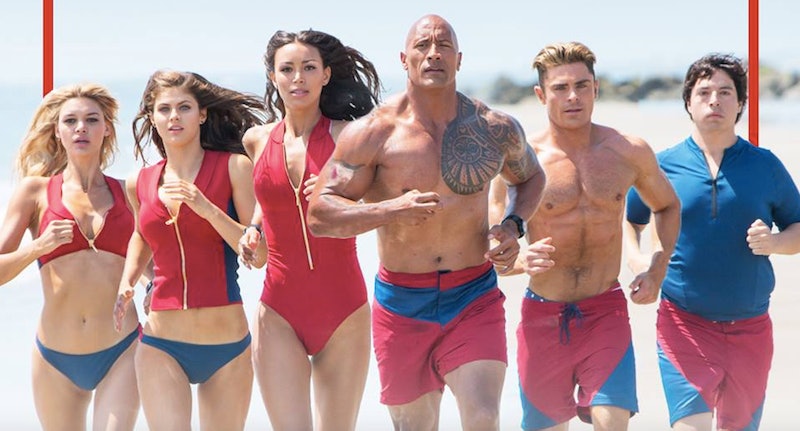 The original Baywatch series is turning 26 this fall, and its iconic slow-mo run is still going strong and making its mark on pop culture. The upcoming comedy-action film based on the '90s series has already given multiple peeks at the reincarnation of Baywatch's legendary staple in the trailers alone. How couldn't it, though? And over the weekend, the film and its cast really paid homage to the slow-mo run by hosting the first-ever Slow-Mo Marathon in Los Angeles. After all, running along the beach with such grace in slow motion is truly an art. In celebration of the film's release on May 25, I speak with Zac Efron, his costars, and some original cast members at the marathon about what fans aren't seeing being the scenes when these iconic shots are being filmed.

Baywatch is known for having ridiculously good-looking, fit actors to make up the fictional lifeguard crew. The movie, starring Efron, Dwayne Johnson, Alexandra Daddario, and Kelly Rohrbach among others, upholds that tradition. But even these guys (and those who came before them) admit the slow-mo run is not a walk in the park. With sand, sweat, wedgies, and sketchy waters, it's safe to say the on-screen depiction is much more suave than what goes on in real life. Here's what the cast has to say about the reality of the always-sexy slow-mo run.

"I mean you're at the beach, so it's like all the stuff, like sand being in various places. That's not weird. And there's no where really to lay down. We built little tents out there to keep us cool, but that didn't work. We were just doing constant pushups and stuff."

"We don't do it in slow-mo, we do it in real time, and then they slow it down. But I think it's about — you have to sort of focus, you can't let your face look ridiculous. You're really focusing on looking sexy and determined at the same time."

"I think in slow-mo you're gonna get a lot more bounce and jiggle than you got in real life. You gotta be in really good shape. If they gave you a trainer like six days a week and had you do swim lessons, you'd be right there with the bunch, don't worry."

"Picking wedgies is never glamorous. Doing it super slowly is even less glamorous. It's just not a very attractive thing to do, if you imagine someone very slowly reaching back, it's just not. We shot on Tybee Island, and I love Savanah and Georgia, but the water in Tybee was not a beautiful shade of blue that you're all going to see when the movie's released. It was shark-y. Locals were like, 'No, we don't swim in there.'"

"It's super fun. What I will say about it sucking is that there is way too much garbage on any beach for you to feel 100 percent safe. Needles and whatnot and you're like, 'I'm gonna get tetanus right now. This is gonna be super fun.'"

"Let's just be real, we're in nature here. Anything can happen. Anything. Some seaweed could get caught in crevices that you don't even think [about]. Sand can be cruel. That little gritty stuff gets everywhere. Let's think about where sand could really get. You think it's fun being in the heat? What a job. The water is shark-y, who wants to get in the water in Miami in the first place?"

"You're out there and they want the shot in direct sunlight and you have to be on a hot beach to make it look real. People don't know you're sweating bullets and they'll make you stop and reshoot it again. You just wanna be back in your trailer in the air conditioning. When we were shooting our opening segment for the show, we did that like 25 times at least. They wanted to make sure it was perfect."

Still, the slowmo run's legacy will live on and look as glam as ever when the new film premieres this May. And if Zac Efron has challenges running on a hot beach, no one is truly alone in that struggle.