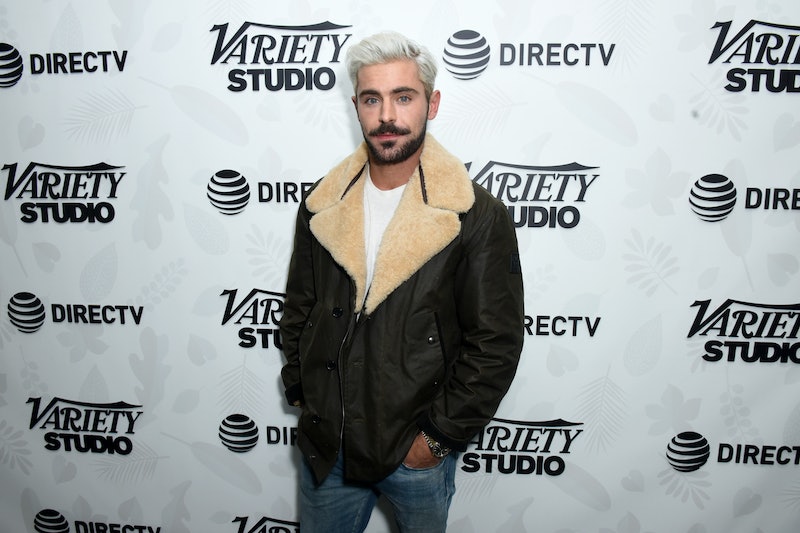 Zac Efron has been slowly moving on from his teen heartthrob days by choosing more daring films as his role as serial killer Ted Bundy in Extremely Wicked, Shockingly Evil and Vile demonstrates. In a new interview with The Hollywood Reporter, Zac Efron's comments on playing Ted Bundy show just how much of an enigma the real-life killer was to those who knew him. And just how challenging it was for the actor to get inside of his head.

Efron spoke with THR at the 2019 Sundance Film Festival, where he talked about one of the things that stood out to him while portraying the serial killer. "One of the most fascinating things about Ted was his ability to really relate to people to a certain extent," the actor explained. "I mean... through all the interview footage and stuff that I've watched on Ted, I've never seen anyone that was like 'We were best buds.' But a lot of people say 'Yeah, I knew him very well.'"

The crimes of Bundy are vile. Between 1974 and 1978, Bundy assaulted and murdered at least 36 women across the United States, although some estimations of his number of victims are higher, according to the Laredo Morning Times. He was sentenced to death in 1979 for the murder of two college students. Bundy was executed via electric chair in Florida in 1989. However, the public's fascination with the serial killer lives on.

As Efron pointed out in his interview, Bundy didn't fit the image of what a serial killer is meant to look for much of the American public. "Whether it was in jail, outside of work, when he was growing up in Seattle, he was just a normal person," the actor said. "Yeah, having to manage that persona, and then have your vice or secret be something so dark, and so twisted, I don't know where the lie begins and ends. But it was very fun to navigate."

Extremely Wicked, Shockingly Evil and Vile focuses on the life Bundy led with girlfriend Elizabeth Kloepfer, played by Lily Collins. From the trailer, it seems the film's goal is to really hit home that a serial killer really can be just like any guy next door. However, not everyone is excited about the movie. Some Twitter users had issues with the upbeat tempo of the trailer, and what they'd describe as the glorification of a serial killer.

While the above tweets make great points, Efron's comments drive home that the the movie is about how Bundy appeared to be a straitlaced guy from the outside. He had a girlfriend and daughter, he wasn't a loner or particularly hideous looking. He had a charm that granted him trust or at least access to his victims.

After the trailer premiered on Jan. 25, and the discourse began online, the film's director Joe Berlinger, who also is behind the new Netflix docuseries, Conversations with a Killer: The Ted Bundy Tapes, shared what his intentions for making the movie were. Twitter user @RedwoodCreate tweeted: "The reason the trailer seems to be painting him as this charismatic good guy is because Ted Bundy was a very charasmastic, nice all American guy who no one suspected." Berlinger quoted the tweet and added, "Exactly!"

In a March 2018 interview with Entertainment Tonight, Efron also expressed a similar stance. "It's very interesting. I think the movie itself is really deep," Efron said. "It doesn't really glorify Ted Bundy. He wasn't a person to be glorified. It simply tells a story and sort of how the world was able to be charmed over by this guy who was notoriously evil and the vexing position that so many people were put in, the world was put in. It was fun to go and experiment in that realm of reality."

Despite the controversy surrounding the trailer, it's clear that Efron's intent is to portray Bundy as the terrifying man that he was, even if that means making the audience supremely uncomfortable in the process.

More like this
Everything You Need To Know About The 'Knives Out' Sequel
By Bustle Editors
9 Movies & TV Shows That Prove Stanley Tucci Elevates Everything He’s In
By Jake Viswanath and Radhika Menon
At 14, Jurnee Smollett Was Taking Meetings With Missy Elliot & Lauryn Hill
By Chloe Foussianes
Lindsay Lohan & Jonathan Bennett Celebrated Mean Girls Day Very Differently
By Jake Viswanath
Get Even More From Bustle — Sign Up For The Newsletter