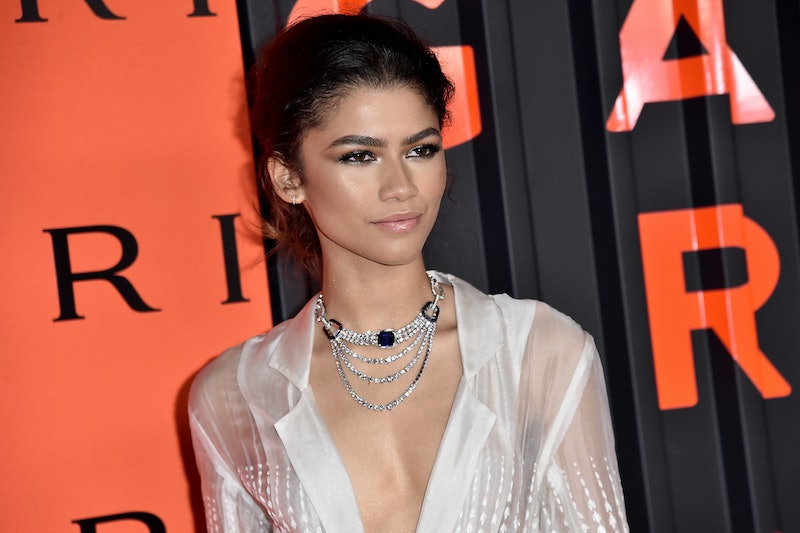 Zendaya kicked off New York Fashion Week in arguably the most glamorous way possible: drenched in diamonds. The Euphoria actress attended a Bulgari party in Brooklyn Thursday night, where she celebrated her role as one of the luxury jeweler’s newest ambassadors. Although her Bulgari multilayered diamond necklace and accompanying rings were mesmerizing, the rest of her ensemble was the real show-stopper. Zendaya's New York Fashion Week look included crisp black trousers and a romantic belted organza shirtdress, which featured a plunging neckline and an elaborate leaf-like pattern, from Indian designer Rahul Mishra’s Spring 2020 Couture collection.

Supermodel Lily Aldridge and British actress Naomi Scott round out Bulgari’s latest class of ambassadors; both attended the event alongside Zendaya. The three women will be featured in the brand’s “Mai Troppo” 2020 campaign, which is an “ode to life and happiness encapsulating Bulgari’s ethos of enjoying the here and now to the fullest,” according to a company press release. The event delivered some serious entertainment with a series of performances from Becky G, Ciara, and Diplo.

In an interview with Women’s Wear Daily, Bulgari CEO Jean-Christophe Babin said that the brand selected Zendaya, Aldridge, and Scott for the campaign in an effort to embrace diversity and inclusion. “Zendaya is epitomizing the Generation-Z spirit, Naomi Scott is British and Indian — it’s this combination that is evidence of the diversity of Bulgari,” Babin told the publication. “It’s not a brand only for Americans or Chinese. It’s a global economy with global diversity and we are acknowledging the universal appeal of the brand."

With Fashion Week just getting underway, we expect to see much more style inspiration from Zendaya in the days to come — that is, when she’s not canoodling with her rumored beau and Euphoria co-star Jacob Elordi. Do your thing, sis.